Talk between Patriarch Kirill and Archbishop Ieronymos of Athens 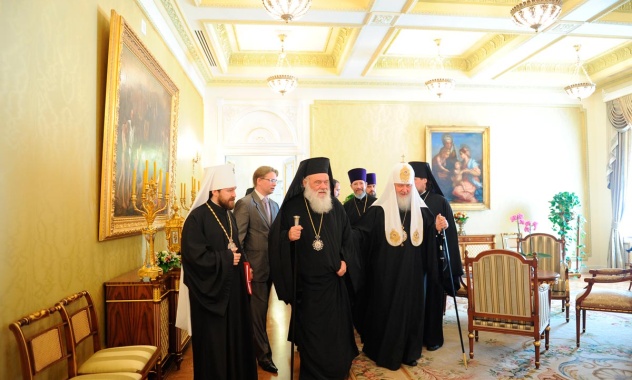 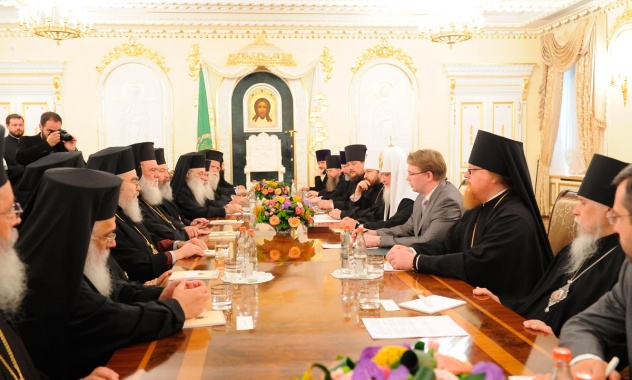 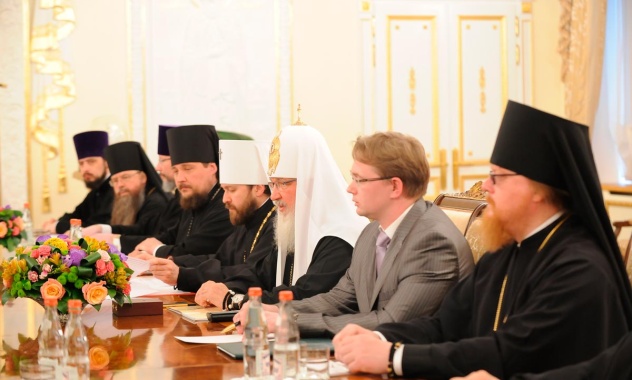 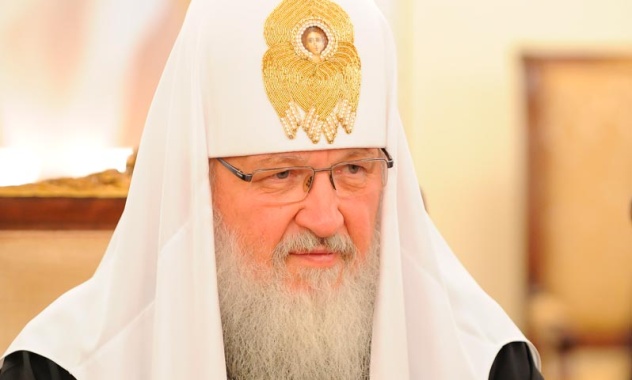 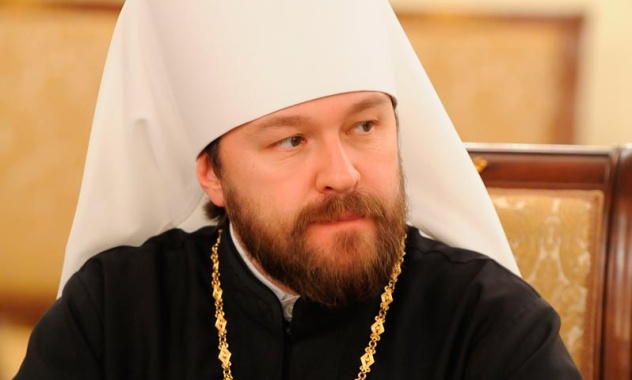 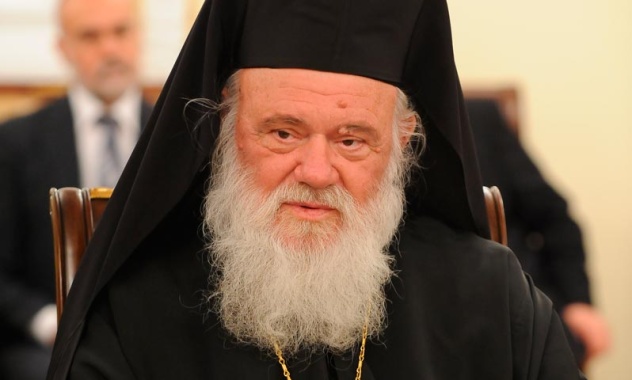 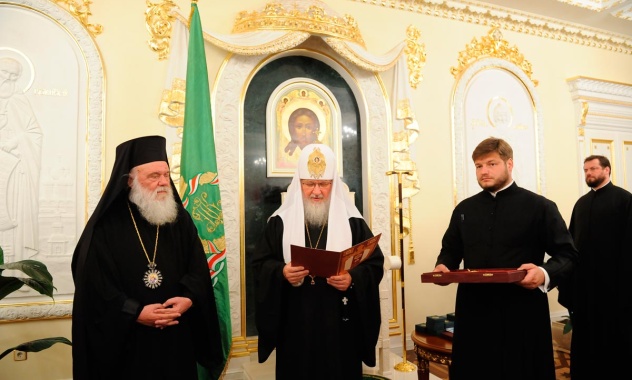 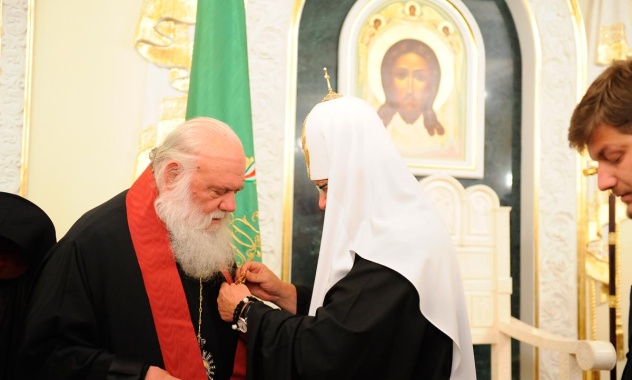 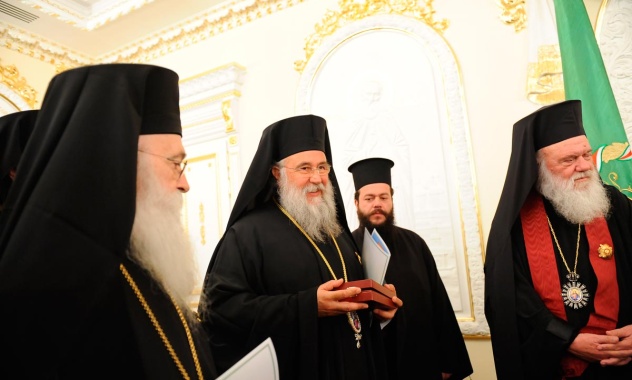 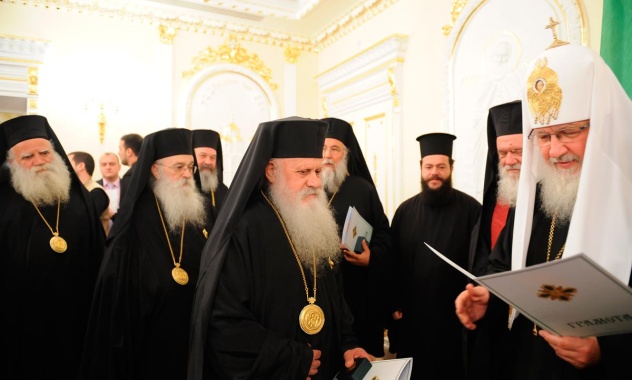 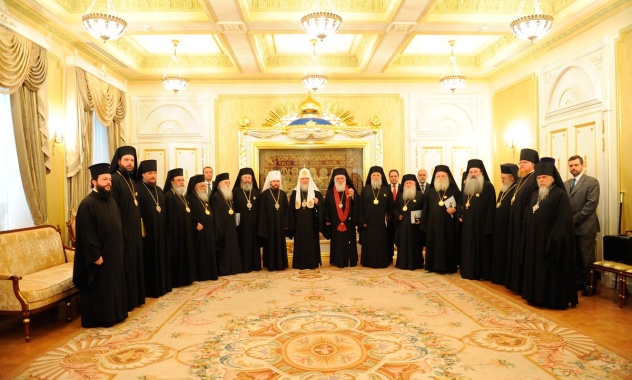 On May 25, 2012, His Holiness Patriarch Kirill of Moscow and All Russia met with His Beatitude Archbishop Ieronymos of Athens and All Greece and his delegation at the Patriarchal residence in St. Daniel’s Monastery in Moscow.

Addressing the guests, Patriarch Kirill said he was glad to welcome His Beatitude Ieronymos and his retinue to the administrative and spiritual center of the Russian Orthodox Church with its official residence of the Patriarch and the Synod. His Holiness related to the Greek delegation the graphic and dramatic history of the Monastery of St. Daniel, the oldest cloister in Moscow, which was closed in the 20th century during the persecution for faith and re-opened before the celebrations on the occasion of the Millennium of the Baptism of Russia.

‘I rejoice in the opportunity to discuss with you and the most reverend bishops who accompany you our bilateral cooperation and interaction’, Patriarch Kirill said and dwelt upon cooperation in social service as one of the aspects of these relations.

‘We take close to our hearts the misfortune that has fallen upon the lot of the Greek people and believe that the Church should live up to the principle clearly stated by St Paul: ‘If one part suffers, every part suffers with it’ (1 Cor. 12:26). The Orthodox solidarity should also be extended to difficult circumstances. Our country, throughout her history including in the 20th century, has experienced great many a hardship. We know what a deep economic crisis and complete collapse of the economy are. In the 90s we went through this trial and know that crises involve not only a decline in people’s living conditions but often also illnesses and deaths, loss of jobs and houses and disintegration of families. We experienced all this in the recent past’, he said.

His Holiness Kirill noted that thanks to the timely efforts made by the Russian leaders during the crisis which affected the whole world and could affect Russia as well, it became possible to maintain people’s standards of life. ‘We managed to avoid such tragic consequences as happened in many other countries, though the rate of economic development decreased of course and the problem of poverty remained as acute as it was before. And today the Russian Orthodox Church seeks to develop her social service in order to support those in need, especially the homeless, the elderly and orphans and those whose salary or allowance is below the subsistence level. Our Church has no such sources of income as other Churches in Europe have: we have no real estate that could bring in return or capital stock. The Russian Church carries out her work using the donations of the flock alone. Of course, the size of funds thus received cannot be guaranteed as it is very much dependent on people’s wellbeing and their readiness to donate for a good cause. But by God’s mercy we can see that people do respond to an appeal for aid in carrying out social programs’, he stated.

Patriarch Kirill recalled that the Russian Church announced a fund-raising drive for those who were most affected by the economic crisis in fraternal Greece and gave a high appraisal to the efforts taken by the Church of Greece to help those in need. ‘You are feeding the hungry and support those who have lost their homes and all this happens at a time when the Orthodox Church of Greece herself is in straitened financial circumstances. I have called our faithful to share a part of the burden that oppresses your Church today; a fund-raising campaign has been held to support your social work to help victims of the crisis. We have raised 17 million roubles. We will transfer these funds to you and will continue supporting your social programs as much as we can’, he said.

His Holiness Kirill also spoke about the importance to joint efforts in the area of pilgrimage as more and more Russians and people from other countries under the canonical jurisdiction of the Russian Church, including Ukraine, Belarus and Moldova, come to Greece and her holy places today and an increasing number of Greeks come to Russia to venerate the shrines of the Russian Church.

His Beatitude Ieronymos thanked Patriarch Kirill for the warm welcome and fraternal hospitality, making a special mention of the deep impression he received from the celebrations held on the eve of the Day of Slavic Literature and Culture including the Divine Liturgy at the Cathedral of the Assumption, procession with the cross and thanksgiving in Red Square in the presence of thousands of people and from his meeting with the leaders of the country as well as from the festive concert given at the State Kremlin Palace.

‘Your country has experienced many troubles in her history. The same can be said about us. You have told us how your people endured the hardships of the 90s. Today, it seems to be our turn. I would like to note that we keep presence of mind and hold our own for we are strengthened by our Orthodox faith and trust in God. Thanks to this, we can survive the crisis’, he said.

His Beatitude Ieronymos also noted that spiritual kinship and mutual understanding was a characteristic feature of relations between the Russian and Greek nations. ‘Respect and love for your people was manifested in the fact that many representatives of our country, both clergy and ordinary people’ used to come to Russia to serve her’, he said, adding that the memory of the Russians’ assistance to the Greeks in their struggle for freedom is alive to this day.

The primate of the Church of Greece, in solidarity with Patriarch Kirill, expressed the conviction that the words of St. Paul ‘If one part suffers, every part suffers with it’ are especially relevant today for the Orthodox world. ‘We are very much moved by the news that a fund-raising campaign has been announced in Russia for the suffering brothers in Greece. We will report it to the next session of the Greek Church’s Synod and to all the Greeks’, he said.

In the course of the talk, a broad range of issues was discussed concerning further development of bilateral church relations in various areas including social service, pilgrimage, the brining of shrines for veneration, theological education, dialogue on church-society and church-state relations and information work, as well as topical issues of pan-Orthodox cooperation.

In the conclusion of the meeting, Patriarch Kirill presented the members of the Greek delegation with decorations of the Russian Orthodox Church. His Beatitude Ieronymos was awarded the Order of St. Vladimir Equal-to-the-Apostles.

Patriarch Kirill also presented Archbishop Ieronymos with a bishop’s crozier as a token of the meeting.