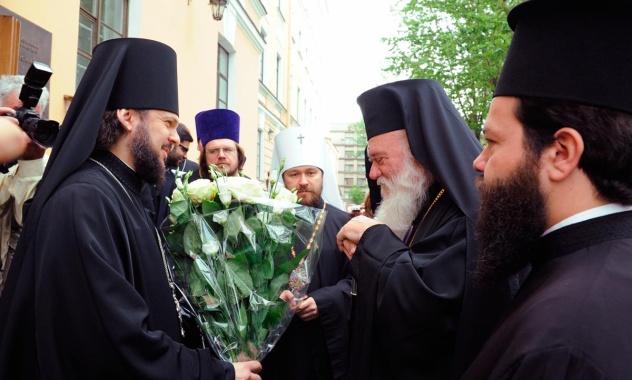 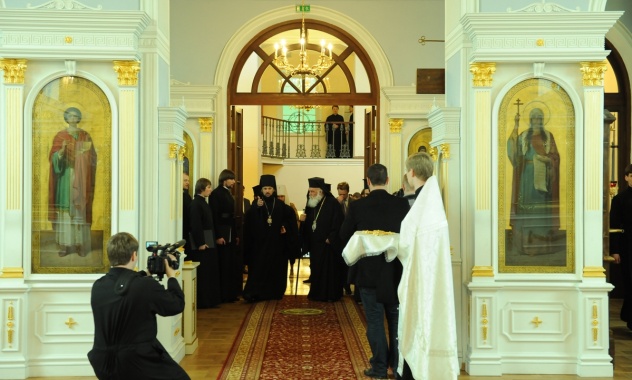 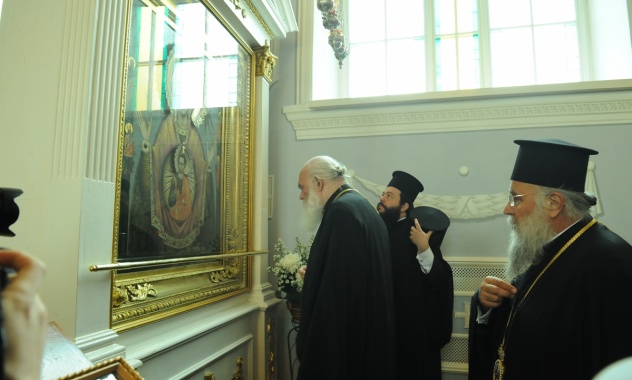 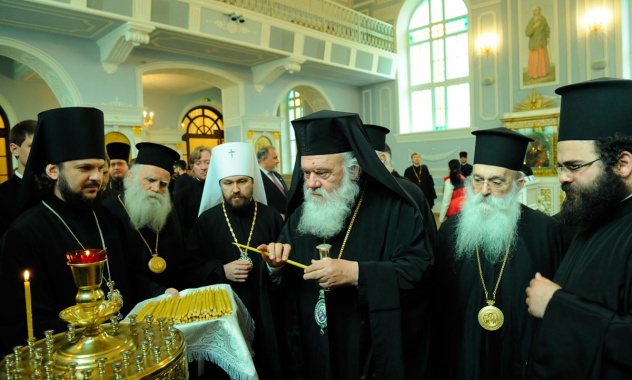 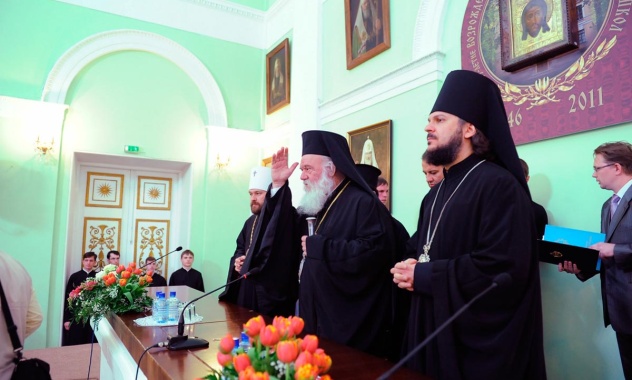 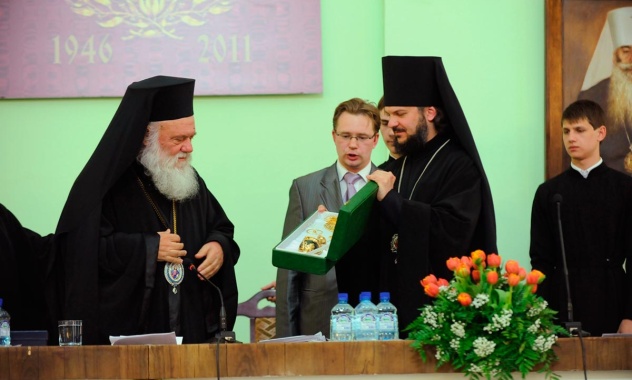 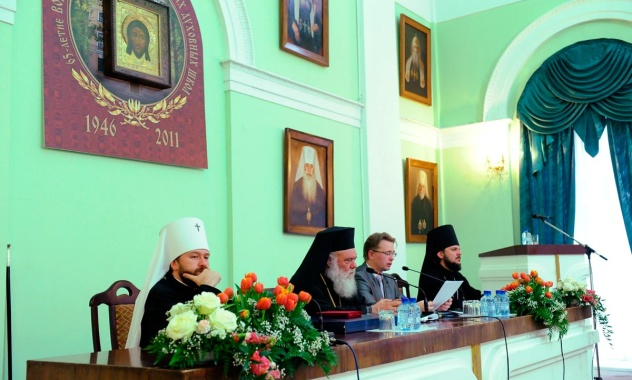 On May 26, 2012, during his trip to St. Petersburg, His Beatitude Archbishop Ieronymos of Athens and All Greece and his retinue visited St. Petersburg Theological Academy and Seminary.

At the academy entrance, His Beatitude was welcomed by the rector, Bishop Ambrose of Gatchina, with professor and students. His Beatitude came to the academy’s Chapel of St. John the Theologian in which he venerated the revered Icon of Our Lady of the Tsar Village the Sign.

Then a solemn act took place at the academy grand hall on the occasion of the visit of the Primate of the Greek Orthodox Church. Speaking on behalf of professors and students, Bishop Ambrose greeted His Beatitude Ieronymos and his delegation, saying, ‘Since the re-opening of the Leningrad theological schools in 1946 and especially under Metropolitan Nikodim (Rotov), delegations of the Church of Greece have become frequent guests of the Academy. During the visit of your predecessor, His Beatitude Archbishop Christodoulos, in May 2001, he met with our professors and students. Prof. Christos Yannaras, a famous philosopher and theologian, delivered a lecture here in May 2010’.

Bishop Ambrose focused on the problem of students’ exchanges for in-depth training. ‘In recent years, there have been regular arrivals of Greek students for a study course in the Academy’, he stated.

Then Archbishop Ieronymos addressed the faculty and students. ‘Thinking about the incredible influence of the Holy Russian Church on all spheres of national, political, religious and social life in Great Russia, I as Primate of the apostolic autocephalous Church of Greece and simply a person feel strong excitement. This excitement grows ever stronger now as I am in the sacred walls of St. Petersburg Theological Academy, which in the 19th century and the early 20th century became alma mater for many outstanding Greek theologians and left in indelible imprint on the destiny of Orthodox theology in the period of dangerous ideological and religious upheavals in the life of Orthodox nations. In this sense, I consider it my highest duty to speak with appropriate respect about the tireless and manifold service of the Holy and Great Church of Christ both for the spiritual re-birth of the great Russian people and for the consolidation of indissoluble spiritual kinship which determined the spiritual relations between our nations arising from the sacred baptismal waters and continuing for some ten centuries from 860 to 2012 not only in happy but also hard times’.

Reflecting on the importance of theology for the historical development of the Church’s mission among Orthodox nations, His Beatitude Ieronymos spoke in detail about the close interconnectedness of ecclesiology and mysteriology including the teaching on the Eucharist in Orthodox theology. He pointed to a weakening of this link in the West, which led to grave consequences for the Western Church.

‘It is generally recognized that Orthodox theology of the new time is indebted in many ways to the Theological Academies in Russia, especially the one in St. Petersburg, since, on one hand, they have manifested an incredible research zeal in the situation of new realities by putting in the forefront in all areas of the Church’s spiritual mission the fundamental theological principles of patristic theology, while, on the other, assuming the heavy burden of promoting constructive dialogue between Orthodox theology and major philosophical schools of the Western Christendom; this dialogue is important for the reduction of extreme tendencies in ideology and modernism’, he added.

According to His Beatitude, the present task of Orthodox theology is not limited to the resumption of patristic tradition. It extends beyond it to include the use of this tradition for giving a more authoritative answer to today’s problems of humanity.

After his address, His Beatitude Ieronymos answered questions from the audience.

In continuation of the remarkable event, the male and mixed choirs of St. Petersburg Theological Schools sang hymns in Greek and Russian.