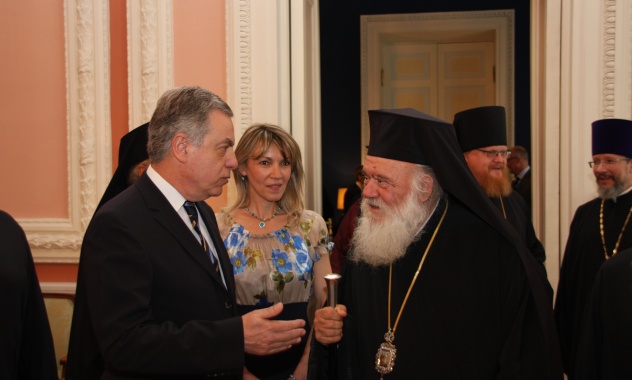 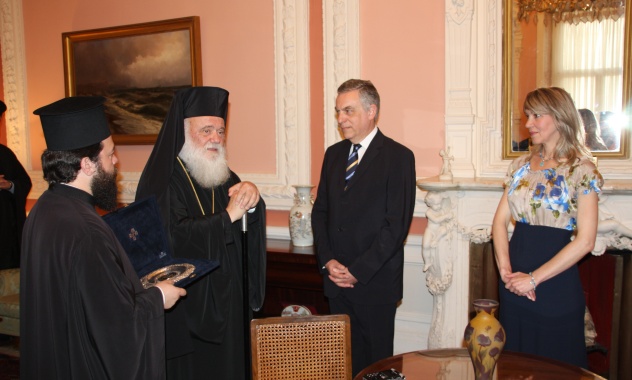 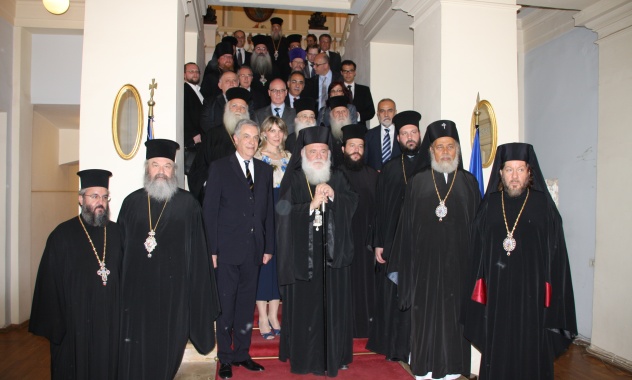 On May 30, 2012, His Beatitude Archbishop Ieronymos of Athens and All Greece and the delegation who accompanied him during his visit to the Russian Orthodox Church visited the Embassy of the Republic of Greece in Moscow.

His Beatitude was greeted by the Greek Ambassador to Moscow Michael Spinellis, the Ambassador of Cyprus Petros Kestoras, representatives of Local Orthodox Churches to the Moscow Patriarchate, and DECR Vice-Chairman Archpriest Nikolay Balashov.

Mr. Spinellis welcomed the high guest to the diplomatic representation of his country in Moscow. Archbishop Ieronymos informed him about the results of his visit to the Russian Orthodox Church, noting that during his meeting with His Holiness Patriarch Kirill of Moscow and All Russia they discussed the bilateral cooperation. Mr. Spinellis and Archbishop Ieronymos exchanged tokens of the meeting.

In his address to those present, the Greek ambassador said that the peace visit of the Primate of the Greek Church to the fraternal Russian Church was an event of special historical importance. ‘This visit is taking place at a time difficult for our homeland when every friend, every brother of the same faith is especially dear to us, when every voice of sympathy and every manifestation of solidarity gives us hope for tomorrow’, he said, stressing that the visit contributed to the further development and deepening of good relations between the two nations, which have been predestined by the whole previous course of history.

In his remarks during the repast, Archbishop Ieronymos shared his impressions of the visit, especially those from his meeting with professors and students of St. Petersburg and Moscow Theological Academies, noting that hundreds of young people who wish to devoted their life to the service of the Church studied in these schools.