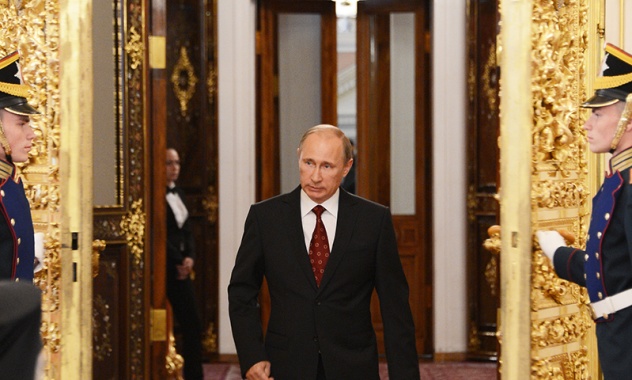 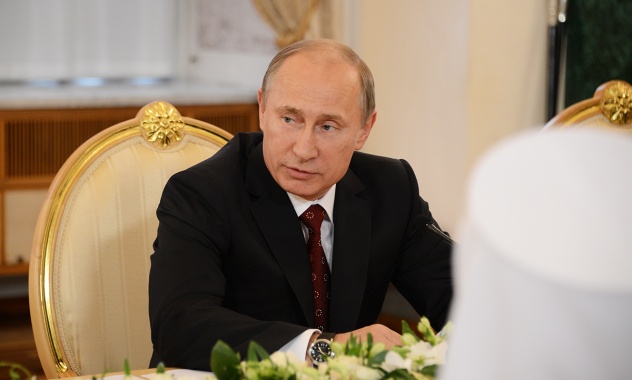 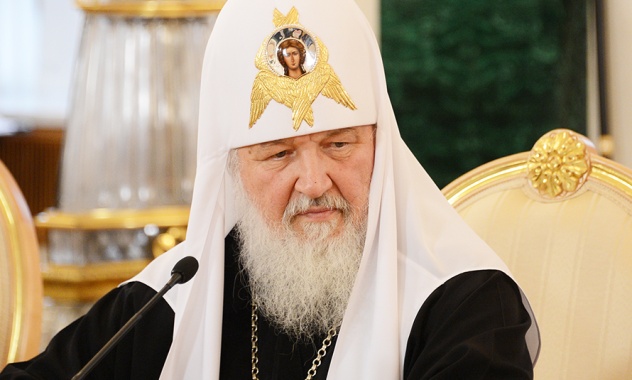 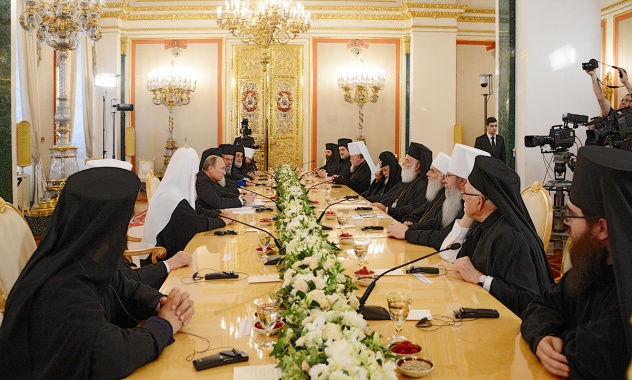 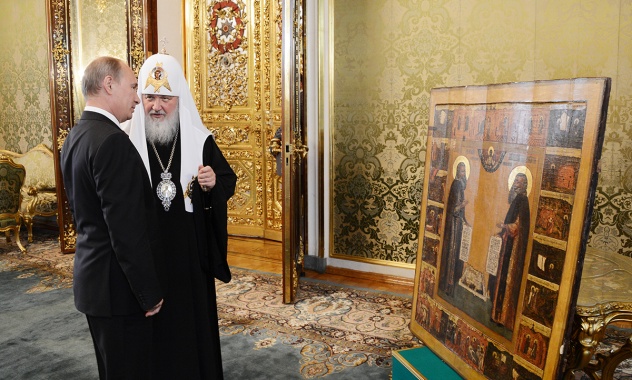 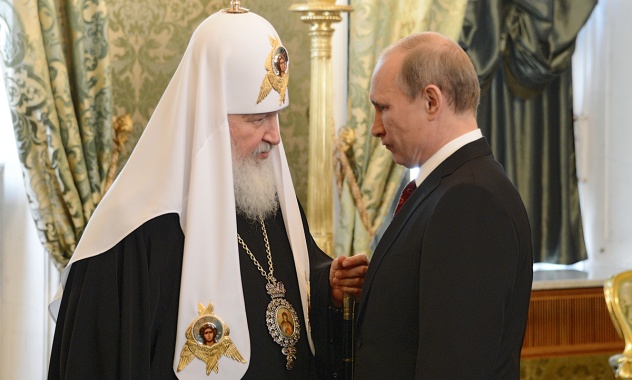 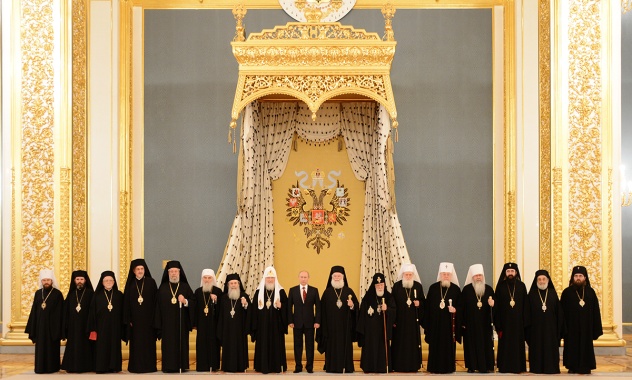 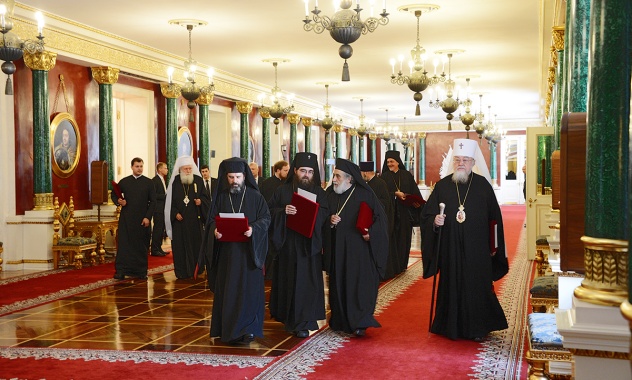 July 25, 2013 – Russian President Vladimir V. Putin met at the Grand Kremlin Palace with His Holiness Patriarch Kirill of Moscow and All Russia and primates and representatives of Local Orthodox Churches who came to Moscow for the celebrations marking the 1025th anniversary of the Baptism of Russia.

Participating in the meeting were Pope and Patriarch Theodore of Alexandria and All Africa, Patriarch Theophilos III of the Holy City of Jerusalem and All Palestine, Patriarch Kirill of Moscow and All Russia, Catholicos-Patriarch Iliya III of All Georgia, Patriarch Irinej of Serbia, Patriarch Neophyte of Bulgaria, Archbishop Chrisostomos II of New Justiniana and All Cyprus, Metropolitan Sava of Warsaw and All Poland, Metropolitan Tikhon of All America and Canada, Metropolitan Hilarion of Volokolamsk, head of the Moscow Patriarchate’s department for external church relations, and heads of the delegations of the Orthodox Churches of Constantinople, Antioch, Romania, Greece, Albania, and the Czech Lands and Slovakia.

The head of the Russian state greeted the attendees, noting that it was the first meeting of this kind. ‘In these days, the Russian Orthodox Church and the whole Orthodox world celebrate the 1025th anniversary of the Baptism of Russia, and allow me to begin this meeting by congratulating you on our common feast’, Mr. Putin said, underlining that the adoption of Christianity preordained Russia’s destiny and her civilizational option and became a turning point in the ecclesial and secular history of the Russian state.

‘It is the moral foundation of Orthodox faith that has formed in many ways our national character and mentality of the peoples in Russia, revealed the best creative qualities of our people and helped Russia to occupy a deserved place in the common European and world civilizations. For the Russian statehood and for our national self-awareness, Orthodoxy has become the spiritual support tying Russia, Ukraine and Belarus by strong bonds of kinship’, he said, describing as symbolical the fact that a joint organizing committee for the celebrations headed by Patriarch Kirill of Moscow and All Russia was set up in these three countries.

Mr. Putin noted that the festivities held on the occasion of the Baptism of Russia were accompanied with numerous secular and ecclesial events. Among them is the bringing of a Christian shrine, the Cross of St. Andrew the First Called to Russia, Ukraine and Belarus as a symbol of the spiritual unity of the Orthodox nations.

‘It was their sincere and firm faith that helped our ancestors to go together through the hardest trials, to overcome hardships and to win. This experience of moral perfection and cultural and socio-political development has become an integral part of the Eastern Christianity’s heritage and has tied by strong bonds the nations of Orthodox religious tradition. Russia has occupied a deserved place among them, advocating justice, seeking to ensure the spiritual integrity of our Orthodox world and standing for cooperation and the strengthening of lively dialogue between Orthodox Churches’, Mr. Putin said.

Addressing the primates and representatives of Local Orthodox Churches, he said, ‘I am confident that your coming to the capital of our state and our meetings will serve these goals. At a time when people are again in a search for moral supports, millions of our fellow citizens see them in religion and trust the wise pastoral guidance of the Russian Orthodox Church. Her selfless service of education is extremely called for and her public authority and peace efforts are aimed at strengthening harmony and stability and restoration of historical relations between our peoples and with our compatriots abroad’.

Mr. Putin also noted that the state-church relations developed on a new level, saying, ‘We act as true partners and co-workers in tackling the most urgent internal and international tasks and in developing joint initiatives for the benefit of our Fatherland and our people’.

‘Russia’, he continued, ‘was built through centuries, gathering strength as a multinational and multi-confessional state, drawing power and confidence from this diversity, being always open and respectful towards other ethnoses and their cultural traditions, advocating the principles of solidarity, freedom and responsibility and the observance of the norms of morality, and safeguarding the traditional standards. It is a necessary condition and a basis for sustainable progressive development and a guarantee of justice in the world order of the 21st century. And the position of Orthodoxy in promoting them is invariably firm. Today there is a special demand for efforts aimed at prevention of inter-civilization conflicts fraught with most series consequences. Russia, with her enormous experience of establishment and maintenance of multi-confessional peace and accord is ready to share her experience’, the president said.

With concern and pain President Putin noted that in many regions of the world, especially in the Middle East and North Africa, inter-confessional tensions were growing and the rights of religious minorities including Christians were infringed upon. ‘I believe’ he said, ‘this acute problem should become a subject of close attention of the international community. Our country will continue pursuing an active creative policy towards the soonest possible settlement of conflict situations. And here, of course, the active stand, participation and support of Local Orthodox Churches and their primates are very important for us’.

The head of the Russian state wished his interlocutors ‘peace, well-being, long life, new achievements of their beneficial selfless service for the establishment of lofty Christian ideals of goodness, charity and justice and for the strengthening of mutual understanding and trust among nations’.

His Holiness shared his memories of the celebrations held to mark the Millennium of the Baptism of Russia, ‘At that time nobody knew which turn history would take and what would happen to our country, but there was a clear feeling that what came was a historic turn in the life of our people and the life of the Russian Church… In the 90s and in the beginning of the 2000s, we gradually worked out a model of church-state relations… Through dialogue and in practice and through overcoming difficulties, we developed an outline of that model characterized by mutual respect, non-interference in each other’s affairs and at the same time willingness to cooperate in matters vital for our people and country’.

He shared his impressions of the liturgy celebrated the day before in the Church of Christ the Saviour with the participation of primates and representative of Local Orthodox Church, describing it as a spiritually intense and powerful event, ‘This was the feeling of all who prayed and who served and who watched it on TV. We asked God to help us to go further along the path of reinforcing our spiritual life and at the same time thanked Him for these 25 years which were not easy but were accompanied with many difficulties both for the Church and our people. But these years have brought forth abundant fruits. Today we can say that the revival of religious life in the historical vast lands of Russia, including the Russian Federation, Ukraine, Belarus and other countries in which the Russian Orthodox Church is present, is unprecedented in the world history. For only 25 years the world has seen the spiritual rebirth of millions-strong people. Churches have been restored and built; monasteries and theological schools have been opened; church mass media have been launched, social and educational projects have been developed…

‘I would like to thank in your person the leaders of the country for the opportunity to carry out today this rational, respectful, open dialogue aiming at solution of concrete problems. We hope that the Lord will show His mercy upon us as He did for the last 25 years’.

Patriarch Kirill spoke about a joint statement issued by the heads and representative of Orthodox Churches who gathered in Moscow on the problem of Christian and Orthodox presence in the Middle East. He presented President Putin with a copy of this statement and said,

‘As a result of the tragedy happening in Syria today, we face a terrible tragedy of losing the Christian presence in that country. If it does take place, the neighbouring countries will not stand aside. We cannot allow having the Christian presence devastated in the Middle East. It will be a civilizational catastrophe. Our sources are from there, our faith is from there; the old Patriarchates are there. If Christians are physically eliminated as a result of the hostilities, as is the case in Syria today, or ousted from the country, it will be a real tragedy both for Orthodox Churches and the world culture’.

His Holiness wished the leaders of the country and all the people ‘God’s help so that in the coming years we may go from strength to strength and the Russian state may be strengthened economically and political stability and peace may be present in our country and our people may be spiritually reinforced’.

Speaking on behalf of the guests, Patriarch Theodore of Alexandria said in particular, ‘Our visit is not a formal one. It is rather an expression of sincere love in Christ and mutual understanding in an atmosphere of spiritual joy prevailing during the celebrations. The Baptism of Russia determined the direction of the historical development of the nation entrusted to your leadership… Passing through the crucible of trials, the Russian man has never been afraid of sacrificing his individual self for the sake of the collective ‘we’. Wishing to honour the age-old history of Christian presence in Rus’, we look with joy at Your Excellency. Our soul is filled with inner exaltation and gratitude and we ardently pray sincerely wishing that the Lord may grant you sound health and all the strength for the benefit and prosperity of the pious Russian people’.

In the discussion that followed, the heads and representatives of Local Orthodox Church shared with the Russian president their thoughts and concerns.