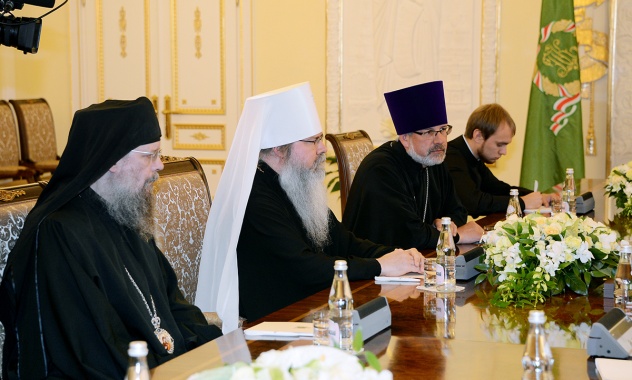 On 22 July 2013, His Holiness Patriarch Kirill of Moscow and All Russia met with His Beatitude Metropolitan Tikhon of All America and Canada, who arrived in Moscow to participate in the celebration of the 1025th anniversary of the Baptism of Rus. The meeting took place at the Patriarchal residence in St. Daniel’s Monastery.

His Holiness Patriarch Kirill welcomed the guests and said that he considered His Beatitude Tikhon’s visit very important.

“Profound changes have occurred in the life of the Russian Orthodox Church and in the life of the Russian people for the last twenty-five years. Many people in Russia identify themselves with Orthodoxy. We can judge by the number of worshippers attending divine services, young people including. Many of them fast and partake of the Holy Communion regularly. However, the most important thing is that many people are finding motivation of their behaviour in Christian beliefs.

“We wish to pray together with the heads of the Local Orthodox Churches and thank God for his mercies to the Russian people. We also wish to pray to the Lord to bless our historical path. We face many problems as our Church is large, and there are many people living in our country. We would like our common prayer to give a new impetus to the advancement of our church life. The celebration will be held in Moscow, Kiev, and Minsk – the three capital cities, the inheritors of Holy Rus. It is important to us to hold the celebration in such a way so that will be a new stimulus for spiritual development.”

His Beatitude Metropolitan Tikhon thanked the Primate of the Russian Orthodox Church for hospitality and added that ‘challenges face Orthodoxy throughout the world, and in North America we also face challenges.’ He thanked His Holiness for assistance and wise counsel during difficulties that the Orthodox Church in America has experienced recently.

Discussed at the meeting were bilateral relations and general Orthodox topics. Both Primates expressed their concern over the threats to the presence of Christian in Syria and in the Middles East. Special concern was expressed over long captivity of Metropolitan Paul of Aleppo ((Patriarchate of Antioch) and Metropolitan Mar Gregorios Johanna Ibrahim  (Syrian Orthodox Church) abducted by terrorists.

The Orders of the Holy Prince Vladimir Equal-to-the-Apostles were granted to His Beatitude Metropolitan Tikhon of All America and Canada (1st class), to Bishop Alexander of Toledo (2nd class), to archimandrite Alexander (Pihach), deacon Kirill Dotsenko and deacon Jesse Isaac (3rd class).