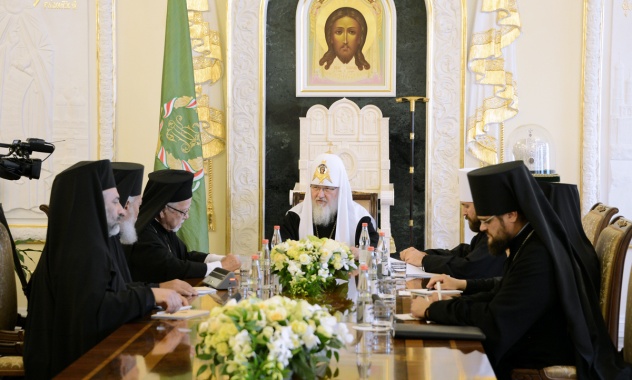 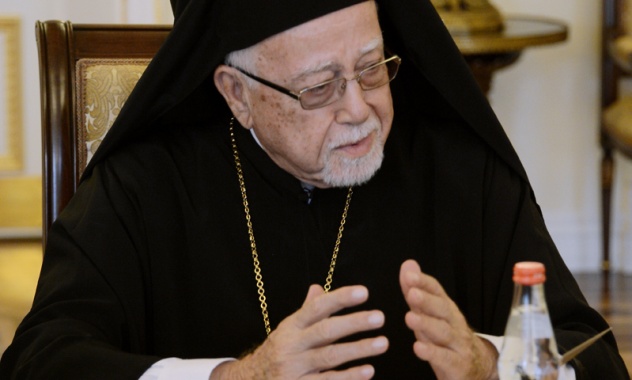 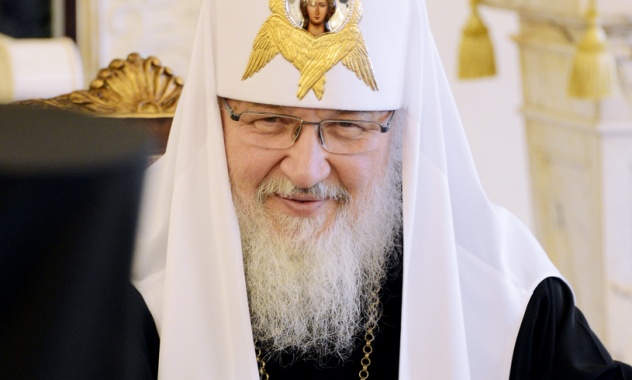 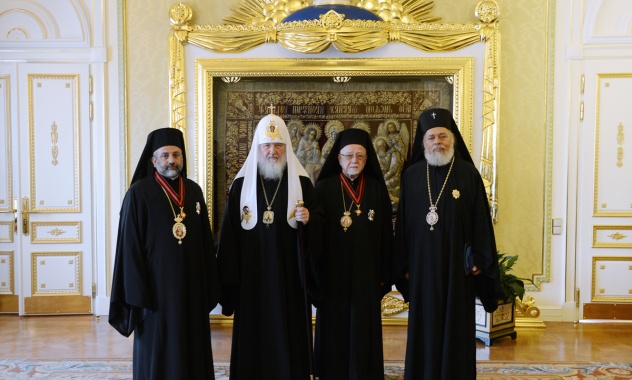 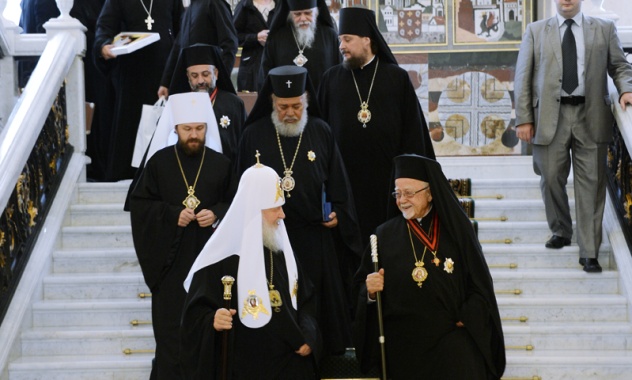 On 22 July 2013, His Holiness Patriarch Kirill of Moscow and All Russia met with the delegation of the Patriarchate of Antioch, which arrived for the celebration of the 1025th anniversary of the Baptism of Russia. The meeting took place at the Patriarchal residence in St Daniel’s Monastery.

The delegation of the Orthodox Church of Antioch is led by Metropolitan Antonio of Mexico, Venezuela, Central America and the Caribbean and includes Bishop Constantine of Chrysopolis and Archbishop Nifon of Philippopolis, representative of the Patriarch of Great Antioch and All the East to the Patriarch of Moscow and All Russia.

Representing the Russian Orthodox Church at the meeting were Metropolitan Hilarion of Volokolamsk, chairman of the Moscow Patriarchate’s Department for External Church Relations; Bishop Panteleimon of Orekhovo-Zuyevo, chairman of the Synodal Department for Church Charity and Social Ministry; and hieromonk Stefan (Igumnov), DECR staff member.

“We are very glad that you have come to the Russian capital and will celebrate with us the 1025th anniversary of the Baptism of Russia to be held in Moscow, Kiev and Minsk. This event is very important for our Church. As you know, the revival of the Russian Orthodoxy began twenty-five years ago, when we celebrated the Millenium of the Baptism of Russia. Much has changed over these twenty-five years: tens of thousand churches and monasteries have been restored, dozens of Orthodox seminaries have opened, Orthodox universities and mass media have come into being. The main thing, however, is that our flock has changed: we see more middle-aged and young people in our churches. Orthodox traditions and customs are becoming a part of the life of the Russians, Ukrainians, Byelorussians and other children of the Russian Orthodox Church. That is why our celebration will be focused on giving thanks to God. We hope to celebrate this thanksgiving together with all Orthodox Churches, asking God to bless the historical pilgrimage of our Church to the glory of His name and for the spiritual benefit of our nations.”

The Primate of the Russian Orthodox Church noted that he had known Metropolitan Antonio of Mexico, Venezuela, Central America and the Caribbean for many years. “You have been our guest many times and you knew Patriarchs Alexy I, Pimen and Alexy II, as well as my spiritual counselor – Metropolitan Nikodim. You are an old friend of the Russian Orthodox Church and now you are an oldest and most respected bishop of the Patriarchate of Antioch,” His Holiness Patriarch Kirill said. “You are a living manifestation of your Church’s tradition and wisdom, and – most important – you keep historical memory and good relations between our Churches as its essential part.”

Discussed at the meeting were the situation of Christians in Syria, ministry of the Patriarchate of Antioch for the benefit of the destitute and refugees who have suffered during the armed conflict, the assistance the Russian Orthodox Church renders to them, as well as inter-Orthodox and inter-Christian relations.

After the meeting, His Holiness Patriarch Kirill of Moscow and All Russia presented the members of the delegation of the Patriarchate of Antioch with awards of the Russian Orthodox Church in consideration of their service for the benefit of the Holy Church and on the occasion of the 1025th anniversary of the Baptism of Russia. Metropolitan Antonio, Archbishop Nifon and Bishop Constantine were awarded the Order of St Vladimir, Equal-to-the-Apostles (2nd class).