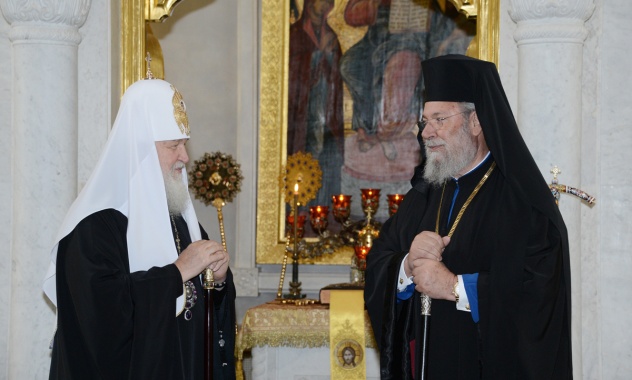 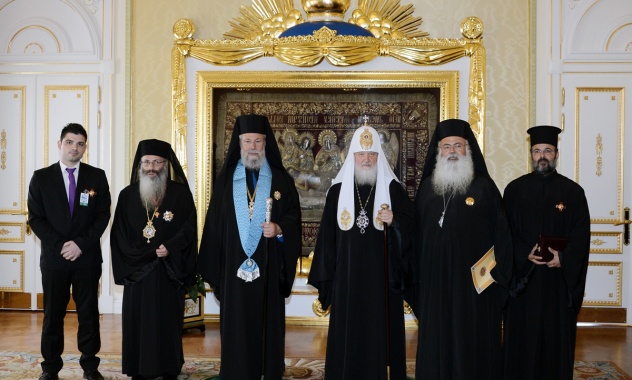 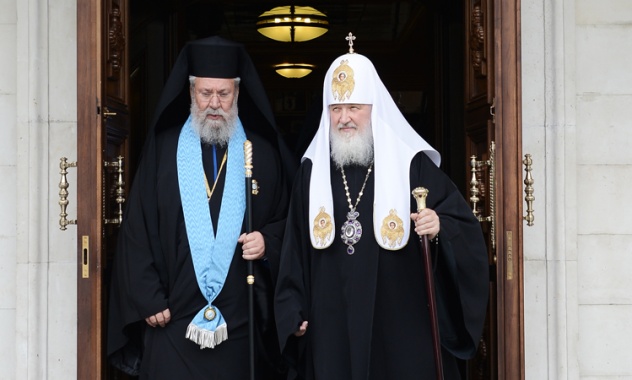 July 23, 2013 – His Holiness Patriarch Kirill of Moscow and All Russian met with the delegation of the Orthodox Church of Cyprus who came for the celebrations devoted to the 1025th anniversary of the Baptism of Russia. The delegation is led by His Beatitude Archbishop Chrisostomos of Cyprus.

Welcoming Archbishop Chrisostomos, Patriarch Kirill said, ‘We cordially thank you for having responded to our invitation to share the joy of the celebrations held on the occasion of the 1025th anniversary of the Baptism of Russia in Moscow, Kiev and Minsk. Your predecessor took part in the celebrations marking the Millennium of the Baptism of Russia. We all remember that event very well as it opened a new page in the history of the Russian Orthodox Church and our Motherland. At that time, we could feel imminent changes but nobody was given to know what would happen as a result of those changes. Now, a quarter of a century later, we can see that the changes have happened in the first place in the spiritual life of our people. A great mercy has been given to our people through the intercession of the host of new martyrs and confessors, and people’s spiritual life, which was banned over 70 years ago, has now transformed both our Church and our country.

‘In these anniversary days, we would like to thank the Lord for these changes together with Primates of Local Orthodox Church and to ask His blessing upon our Church’s further historical journey for the good of the spiritual prosperity of our people. The Orthodox Church is one Church. The boundaries between us are theoretical. So, the 1025th anniversary of the Baptism of Russia is a feast for the entire Orthodox world’. Patriarch Kirill pointed to close relations existing between the Churches of Russia and Cyprus and recalled his visit to Cyprus in 2012.

Archbishop Chrisostomos, on his part, thanked Patriarch Kirill for the invitation to take part in the festivities and shared his memories of his visit on the occasion of the Millennium of the Baptism of Russia in 1988 as member of the Church of Cyprus delegation. ‘Today we have an opportunity to see that for the years which have passed since that time, serious changes have taken place in the life of the Russian Orthodox Church. We wholeheartedly wish that the Russian Church may grow from strength to strength for the good of her flock. We have come to bear witness to the unity inherent in the One Holy Apostolic Church’, he said.

‘I cannot avoid mentioning the support the Russian state has rendered to our island for many years’, he continued, ‘We thank you for the contribution you have made to the settlement of our Cyprus problem and express our confidence that you will always support us in our search for a just solution of this problem. We wish abundant blessings from the Lord to you personally as Primate of the Russian Church and to all the Russian people’.

The two primates discussed the Russia-Cyprus relations, the actions to be taken by the Churches in the difficult time of economic crisis, the aid to the needy, and the situation of Orthodoxy in such regions as the Balkans and the Middle East. They expressed deep concern for the suffering and threats to the life of Orthodox Christians in Kosovo and Syria. Archbishop Chrisostomos noted the especially important role Russia plays in the process of the Middle East settlement, underlining that Christians in the region pinned great hopes on Russia and the Russian Orthodox Church.

In a spirit of fraternal understanding, they also discussed issues of general Orthodox significance related to the preparations for the Pan-Orthodox Council and to the consolidation of unity of holy Orthodoxy, as well as methods of inter-confessional dialogue, re-affirming their unanimous approach to this matter.

After the talks, Patriarch Kirill presented Archbishop Chrisostomos and members of his delegation with awards of the Russian Orthodox Church in acknowledgment of their work for the good of the holy Church and on the occasion of the 1025th anniversary of the Baptism of Russia. Archbishop Chrisostomos was awarded the Order of Glory and Honour, 1st degree, Metropolitan George of Pathos with the Order of St. Alexis of Moscow, 2d degree, Bishop Christopher of Karpatia with the Order of St. Vladimir Equal-to-the-Apostles, 2nd degree, and Deacons Cyprian Kindourisou and Christos Koukliotis with the same order, 3d degree.