Metropolitan Hilarion meets with the Vatican Secretary of State 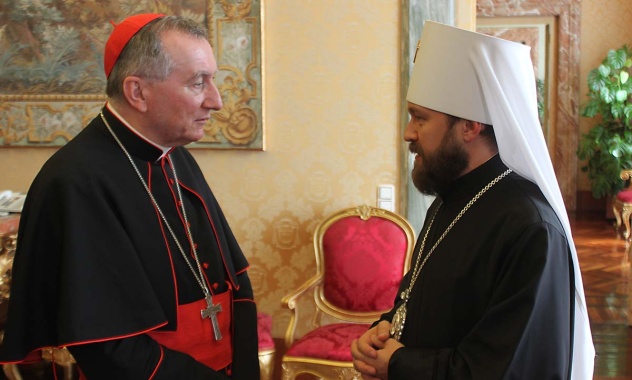 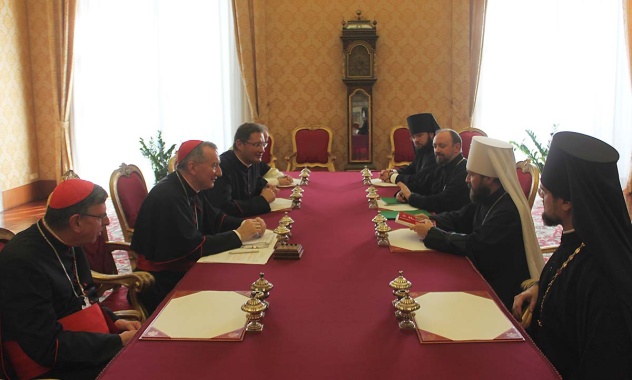 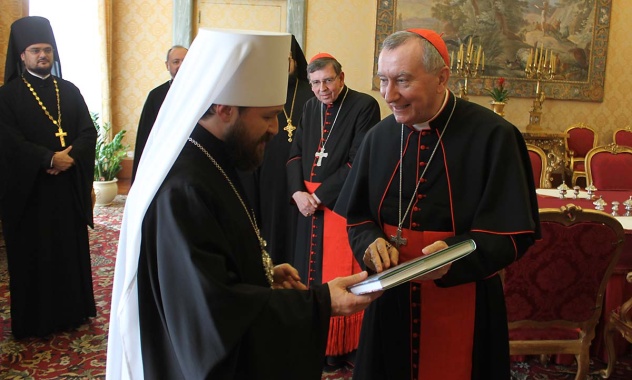 On 17 October 2014, Metropolitan Hilarion of Volokolamsk, chairman of the Moscow Patriarchate’s Department for External Church Relations, met with Cardinal Pietro Parolin, the Secretary of State of the Holy See.

Taking part in the meeting, which took place at the Apostolic Palace in Vatican City, were Cardinal Kurt Koch, President of the Pontifical Council for Promoting Christian Unity; Mgr. Visvaldas Kulbokas from the Secretariat of State of the Holy See; the Rev. Hyacinthe Destivelle from the Pontifical Council for Promoting Christian Unity; archimandrite Antony (Sevryuk), administrator of the Moscow Patriarchate parishes in Italy, hieromonk Stephan (Igumnov), DECR secretary for inter-Christian relations, the Rev. Alexy Dikarev, a staff member of the DECR secretariat for inter-Christian relations, and hierodeacon Nikolai (Ono), a postgraduate of the Ss Cyril and Methodius Institute of Post-Graduate Studies.

Discussed was a wide range of issues pertaining to the relations between the Russian Orthodox and the Roman Catholic Churches and current international problems.

The high level of interaction between the two Churches in cultural issues and in the exchange of experience in social work was noted. The participants underscored the topicality of common efforts in the upholding of traditional moral values.

Metropolitan Hilarion and Cardinal Parolin exchanged opinions on the 3rd Extraordinary General Assembly of the Synod of Bishops on ‘The pastoral challenges to the family in the context of evangelization’ taking place in Vatican.

Special attention was paid to the situation in the Middle East where Christians were persecuted and discriminated because of the events of the so called Arab Spring. It was noted that the consolidation of efforts of the world community, including religious communities, is necessary for normalization of the situation.

Also discussed were the situation in Ukraine and a possible contribution of religious communities into the settlement of the crisis.