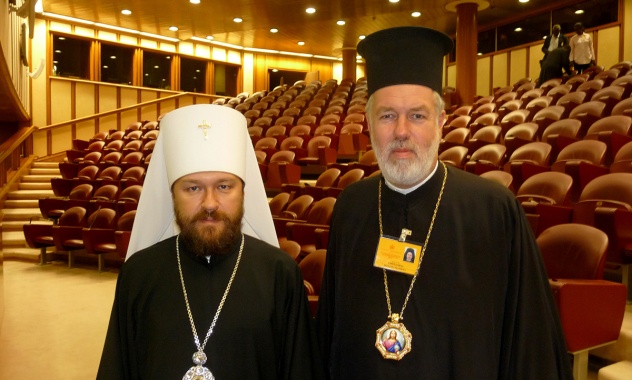 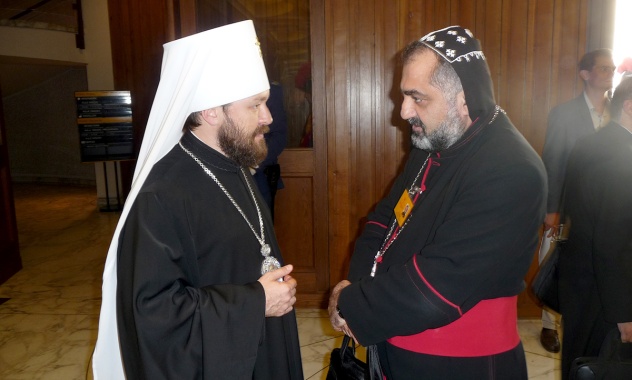 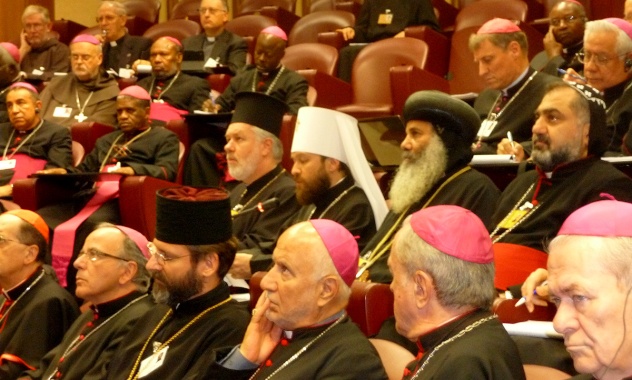 On October 16, 2014, Metropolitan Hilarion of Volokolamsk, head of the Moscow Patriarchate’s department for external church relations, attended the plenary session of the Third Extraordinary General Assembly of the Synod of Catholic Bishops held these days in the Vatican on the theme ‘Pastoral Challenges of the Family in the Context of Evangelization’.

Before the session, the high representative of the Russian Orthodox Church was warmly welcomed by Pope Francis, Secretary of State Cardinal Pietro Parolin, Prefect of the Congregation for the Doctrine of the Faith Cardinal Gerhard Ludwig Muller, President of the Pontifical Council for the Family Archbishop Vincenzo Paglia, representative of the Patriarchate of Constantinople Metropolitan Athenagoras of Belgium and other participants in the meeting.

The plenary session chaired by Pope Francis was opened with an address by Metropolitan Hilarion who greeted the Head of the Roman Catholic Church and all the bishops present on behalf of His Holiness Patriarch Kirill of Moscow and All Russia.

In his address, the DECR chairman underlined that ‘The topic of the family is one of the most acute and vital today. It is an indicator of the moral state of the society in which we live’. In today’s society, Metropolitan Hilarion said, ‘there is an increasingly aggressive propagation of the idea of moral relativism applied also to the institution of the family held sacred by all of humanity’. The main challenges facing the institution of traditional family today are frequent disintegration of families, abortion, legalization of same-sex unions and the spread of such technologies unacceptable from Christian point of view as ‘surrogate motherhood’.

Metropolitan Hilarion called the Orthodox and the Catholics ‘to join efforts and come out as a united front for the noble goal of protecting the family when confronted by the challenges of the secular world… both in dialogue with the legislative and executive authorities in particular countries and on the platforms of international organizations, such as the UN and the Council of Europe’.

The DECR chairman made a special mention of the Eastern Christian tradition of married clergy and the Orthodox Church’s practice of oikonomia with regard to church divorce and second marriage. His Eminence expressed the idea that this age-old practice could become a valuable experience in settling pastoral problems of the family.

Speaking about Eastern Catholic Churches in the end of his address, Metropolitan Hilarion expressed deep concern over the involvement of the Ukrainian Greek Catholic Church together with Ukrainian schismatics in the civic confrontation in Ukraine, which has already taken thousands of lives. He called the representatives of this Church ‘to renounce any statements on political topics and any visible forms of support of the schism’.