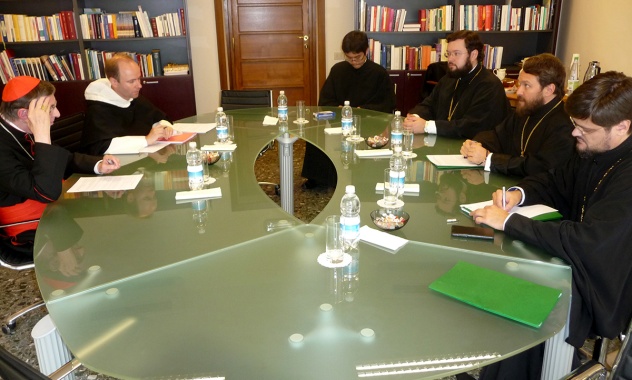 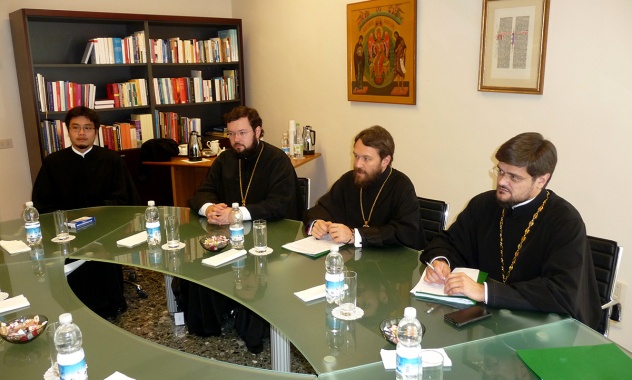 On October 16, 2014, Metropolitan Hilarion of Volokolamsk, head of the Moscow Patriarchate’s department for external church relations, visited the Pontifical Council for Promoting Christian Unity to meet with its president, Cardinal Kurt Koch.

They discussed the work of the Third Extraordinary General Assembly of the Synod of Catholic Bishops held in the Vatican in these days and attended by representatives of the Moscow Patriarchate, as well as the most burning issues of the Orthodox-Catholic relations and cooperation between the Russian Orthodox Church and the Roman Catholic Church. They considered in particular the cooperation between the Moscow Patriarchate and the Holy See in the sphere of culture and in the area of students’ exchange, as well as some other matters of mutual concern.

An exchange of opinions took place concerning the results of the meeting of the Joint Commission for Theological Dialogue between the Orthodox Church and the Roman Catholic Church, which took place from September 16 to 23, 2014, in Amman.

Participating in the meeting were also Archimandrite Antony (Sevryuk), administrator of the Moscow Patriarchate parishes in Italy, Hieromonk Stephan (Igumnov), DECR secretary for inter-Christian relations, the Rev. Alexy Dikarev, a DECR staff member, and Hierodeacon Nikolay (Ono), a postgraduate of the Ss Cyril and Methodius Institute of Post-Graduate Studies.