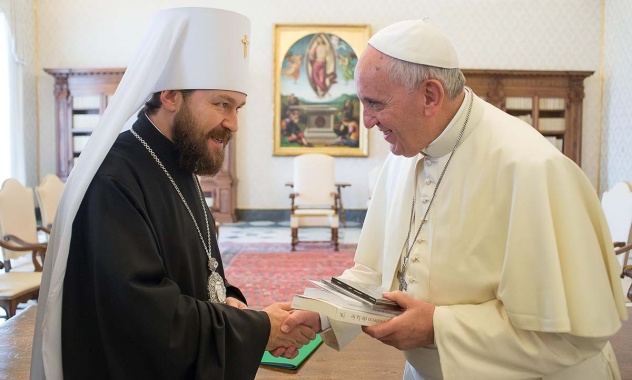 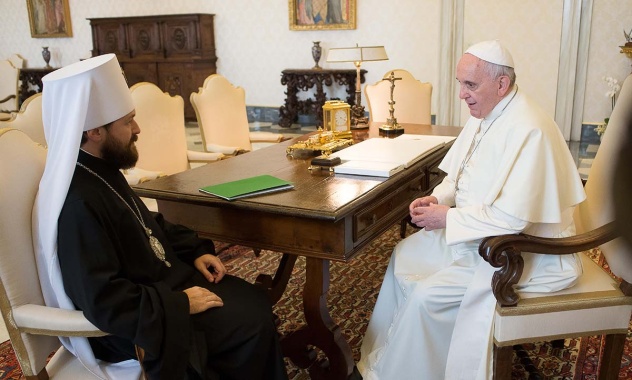 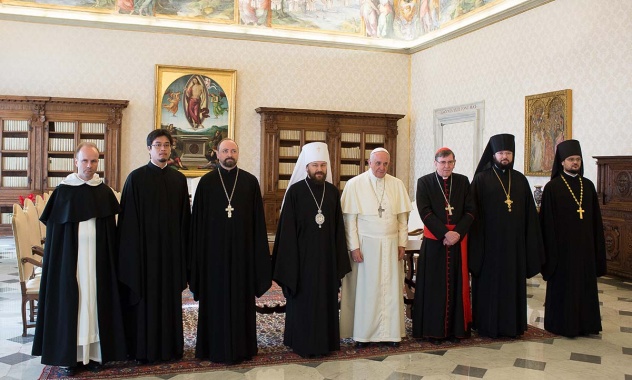 On 17 October 2014, Metropolitan Hilarion of Volokolamsk, chairman of the Moscow Patriarchate’s Department for External Church Relations, met with the Pope of Rome Francis.

Metropolitan Hilarion conveyed greetings from His Holiness Patriarch Kirill of Moscow and All Russia to the Primate of the Roman Catholic Church, and Pope Francis conveyed his fraternal greetings and best wishes to Patriarch Kirill.

Much attention was paid to the dramatic situation in Ukraine where the conflict lasting for a year has claimed thousands of human lives. Metropolitan Hilarion told the Pope about the situation in the east of Ukraine where three priests were killed and fifty church building were partly or completely destroyed and shared his deep concern about the involvement of the Ukrainian Greek Catholic Church in the political conflict on the side of the forces hostile to the Russian Orthodox Church. Metropolitan Hilarion expressed his hope that the Greek Catholics will revise their position, renounce unilateral politicized declarations and stop support for the schism.

Also discussed was the tragic situation of Christians in the Middle East. The necessity of consolidated actions of the Churches for the defence of Christians in the regions was noted. The DECR chairman told the Pope about the initiatives of the Russian Orthodox Church and thanked him for his peacemaking efforts.

Consideration was given to various aspects of the Orthodox-Catholic cooperation. Metropolitan Hilarion recounted the results of the 13th plenary session of the Joint Commission for Theological Dialogue between the Orthodox and the Roman Catholic Churches held in Amman, Jordan, last September. The DECR chairman underscored that consideration of the correlation between synodality and primacy on the local, regional and universal levels of the church governing must be based on the sources rather than on theological speculations.

Metropolitan Hilarion shared with Pope Francis his impressions of participation in the plenary session of the Synod of Catholic Bishops, noting the topicality of thorough discussion of the institution of the family and the necessity of defending traditional family values. The importance of cooperation in this area between the Orthodox and Catholic Churches was underscored.

After the audience, which lasted an hour in the atmosphere of mutual understanding, Metropolitan Hilarion introduced members of the Moscow Patriarchate delegation to Pope Frances.