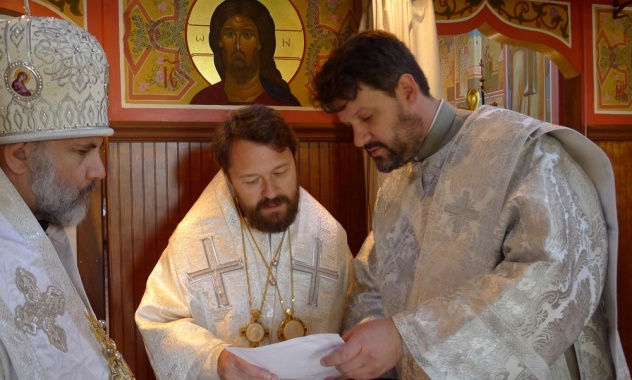 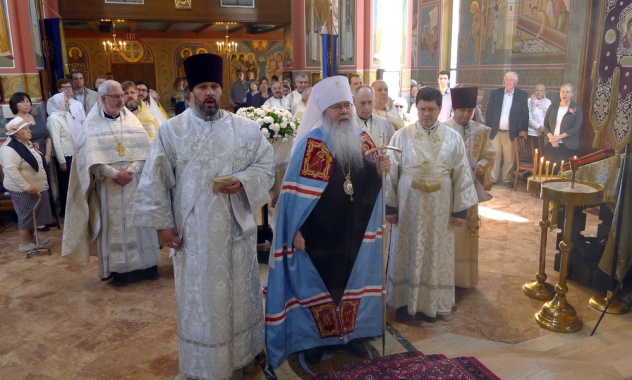 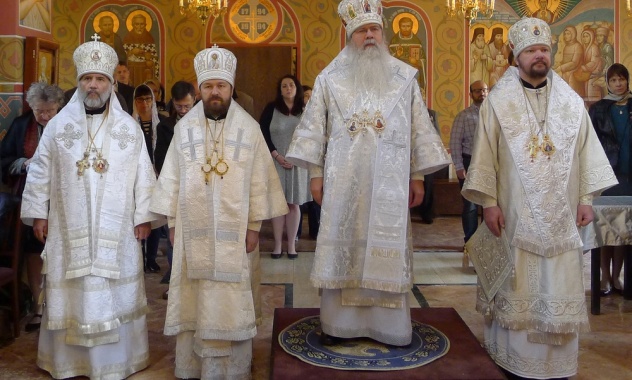 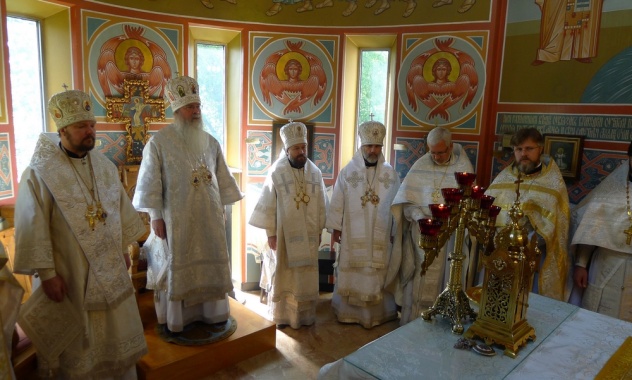 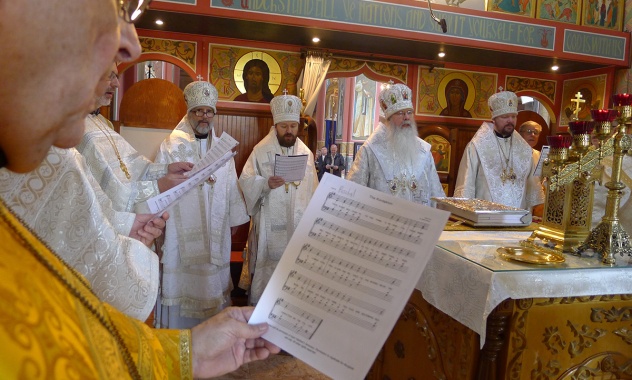 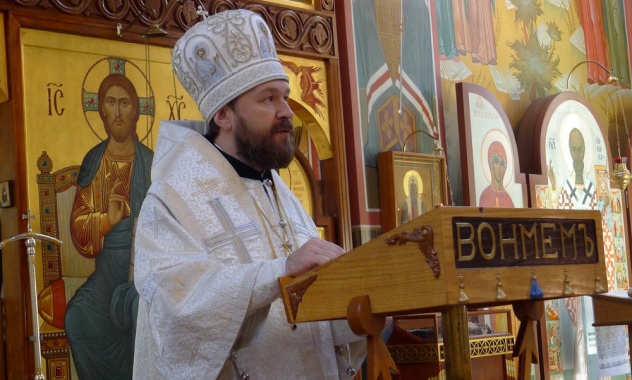 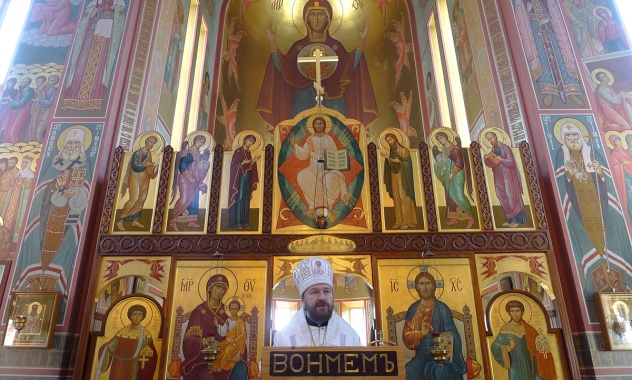 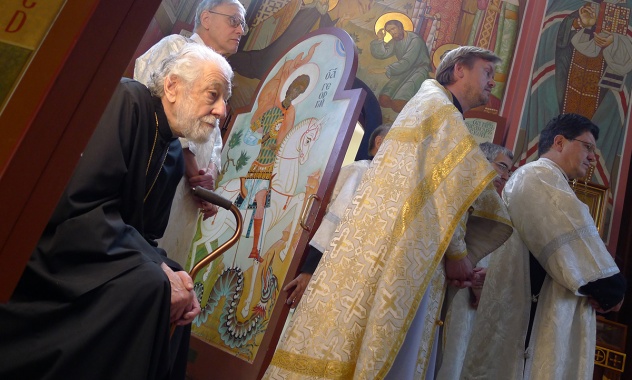 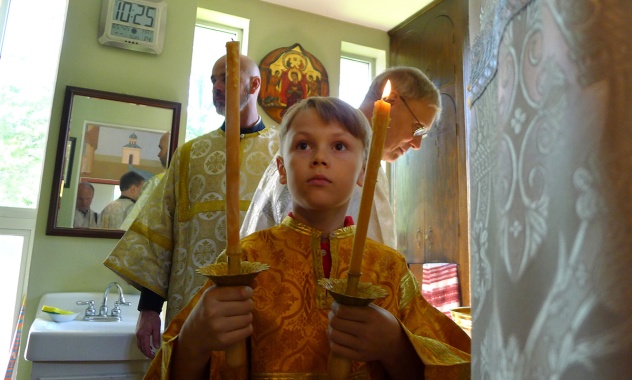 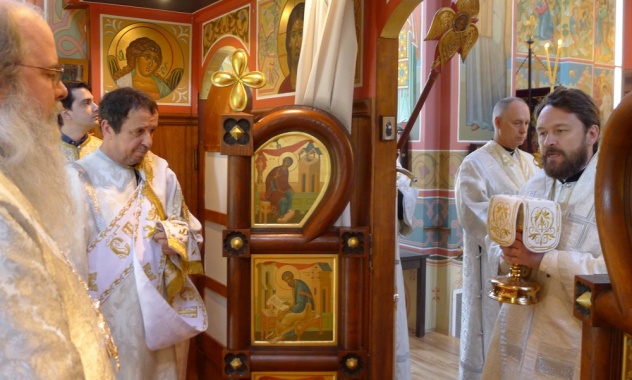 On 14 May 2017, His Beatitude Tikhon, Archbishop of Washington, Metropolitan of All America and Canada, officiated at the Divine Liturgy at St. Nicholas Cathedral in Washington, DC. Concelebrating with the Primate of the Orthodox Church in America were Metropolitan Hilarion of Volokolamsk, chairman of the Moscow Patriarchate’s Department for External Church Relations; Bishop John of Naro-Fominsk, administrator of the Moscow Patriarchate’s parishes in the USA; and Bishop Daniel of Santa Rosa.

Among the concelebrants were also ordained members of the Russian Orthodox Church’s delegation that had taken part in the World Summit in Defense of Persecuted Christians: Archpriest Nikolai Danilevich, vice-chairman of the Department for External Church Relations of the Ukrainian Orthodox Church, and Hieromonk Ioann (Kopeykin), vice-rector for education of Ss. Cyril and Methodius Theological Institute of Postgraduate Studies; as well as Archpriest Yaroslav Lutoshkin, a cleric of the Moscow Patriarchate’s parishes in the USA, and the clergy of St. Nicholas Cathedral. Praying at the service was Protopresbyter Daniel Hubiak, former representative of the Orthodox Church in America to the Moscow Patriarchate.

After the Gospel reading Metropolitan Hilarion of Volokolamsk addressed the worshippers with a homily, saying:

“Your Beatitude, Your Eminences and Graces,

“Today the Gospel tells us of the encounter of the Saviour with the Samaritan woman and their conversation. It is clear that this conversation, which took place on the road between Samaria and Galilee near the city of Sychar, created a great impression on the apostles, because John the Evangelist conveys in detail its contents. Images of this encounter have survived also in the ancient Christian catacombs, which is an indication of the meaning this gospel story held for the first Christians.

“The Samaritans were related to Jews in origin, language and culture, but there were profound differences in the faith between them: although they recognized the Law and the Pentateuch of Moses, the Samaritans were inclined to worship pagan gods too. It was for this reason that, upon returning from Babylonian exile, the Jews refused to allow them to take part in the restoration of the Temple of Jerusalem, and the Samaritans built their own temple on Mount Gerizim. Their choice of location was not fortuitous: Mount Gerizim, along with Mount Ebal, was chosen by Moses for the daily reading of the Law to the assembled people of Israel (Deut 27:12). Here, at the foothills of Gerizim, the ancient well has been preserved which, according to tradition, had been dug by the Old Testament patriarch Jacob, and by which the Samaritan woman met Christ.

“Both Mount Gerizim and Jacob’s well were holy sites for the Jews and Samaritans alike. But the right-believing Jews despised the Samaritans so much that they would never even converse with them. It is therefore no surprise that the central pivot around which the conversation unfolded was the critical question of what is true worship of God.

“For the Samaritan woman, the historicity and the antiquity of tradition was important – she repeatedly refers to her ancestors: to “our father Jacob, that gave us the well” (Jn 4:12) and to the fact that “our fathers worshiped [God] in this mountain” (Jn 4:20) … The Saviour answers her questions with divine humility and love. He does not reject the Old Testament tradition, and does not claim to be “greater” than the righteous Jacob, as the Samaritan woman had ironically suggested. He does not set out to prove the true nature of the worship of God in Jerusalem and does not accuse his bold interlocutor of idolatry and ignorance, as perhaps a Jewish teacher of the Law, offended, may have done. He only, with meekness, reveals to her the superiority of the “living water” (Jn 4:10) over the water from the well of the patriarchs; the gospel over the Old Testament in all its understanding; the Good News of Christ over the collection of rules and commandments; the gift of Christ’s grace over the gift of Old Testament righteousness. Finally, in answering the question on the Messiah, that is, Christ, he speaks to her openly in a way that he never spoke to the apostles: “I am he, the one who is speaking to you” (Jn 4:26). Thus, in the evangelist John’s narrative the biblical “Jacob’s well” is transformed into an inexhaustible symbol for the knowledge of God, into the profoundest spiritual image of a personal encounter with Christ.

“The Holy Fathers, and particularly St. John Chrysostom, in interpreting the gospel image of the “living water” which quenches the thirst forever, see in it the grace of the Holy Spirit. Water brings to life that which is dead and withered; for the desert dweller it signifies purification and a new life. Thus, the grace of the Holy Spirit cleanses and vivifies all of the faithful within the Church, granting to them the strength to receive, love and know Christ. If we desire that this grace become within us a “well of water springing up into everlasting life” (Jn 4:14), it must become for us the measure of our life in Christ. And every Christian who acquires it must daily ask himself: have I lost the awareness and vitality of my spiritual perception of the mundane? Has my heart run dry of the love of Christ? Has my spiritual life been turned into a dead repository of habits, rules and regulations?

“Vladimir Lossky famously defined Tradition as the “life of the Holy Spirit in the Church.” The true tradition of the worship of God acquires the fullness of everlasting life only in Christ, in the Pre-eternal and Divine Word which guides the flow of history. Both the righteousness of the Old Testament patriarchs and the Law of Moses–all that is just and good in human history–is truly such in Christ. For he is the “Alpha and Omega, the beginning and the end” of history, and he transfigures this history by the word he utters in the Book of Revelation: “To the thirsty I will give as a gift from the spring of the water of life” (Rev 21:6). By God’s grace, in being Christians we preserve and build up this history, this living Tradition, within our Orthodox Church.

“The life of every Christian, until the time that it remains genuinely so, is the Good News. The Samaritan woman (in the Church she is venerated as the holy martyr Photini), when she recognized the Saviour, immediately went and spoke about him to all of her neighbours and, according to John Chrysostom, converted a whole city to Christ. Yet, even without saying a single word about Christ, the Christian bears witness to Him every day through his moral demeanour and way of life. This witness is akin to martyrdom, it is a witness through one’s own life; and it is the one thing that is precious, for it is a witness of the Spirit living within the human person and directing him towards life everlasting. For the person who lives by the Spirit, his life’s heroic deeds and proclamation of the Good News are as essential as his daily food, according to the word and example of the Saviour: “My food is to do the will of him who sent me and to complete his work” (Jn 4:34). This person will not wait until “comes the harvest”: for him, “the fields are ripe for harvesting” (Jn 4:35).

“In the reading from the Book of Acts, we heard today of how the disciples of the apostles, converted from paganism, “were first called Christians” in Antioch (Acts 11:26). Between this event and today’s Divine Liturgy, here in this church, there are two thousand years of history. But in the Church we are one with the first Christians, they are present with us here today at the Holy Eucharist, and they pray for us, and we for them. For God’s Church, abundant with the gifts of the grace of the Holy Spirit and revealing these gifts in the riches of Holy Tradition and the preaching of the gospel, is alive and unchanging in her prayerful unity.

“Your Beatitude, dear Vladyka Tikhon! The Orthodox Church in America is a young Church, a missionary Church, and a Church which is growing dynamically, yet already with her own history of piety and sanctity. This history is replete with the abundant life of the Spirit, and more and more people are joining your Local Church by partaking of it. This year we celebrate the hundredth anniversary of the enthronement as Patriarch of Moscow of St. Tikhon, a confessor of the Church of Russia, who, like so many other Russian pastors and missionaries, invested much effort and labour for the building up of Orthodoxy in America. You not only bear St. Tikhon’s name, but you also continue his apostolic labours, as did your predecessors on the Primatial Throne of the Orthodox Church in America, and before this of the North American diocese and then the Metropolia.

“We shall be marking the hundredth anniversary of St. Tikhon’s calling to the Patriarchal ministry in the same year as Russia commemorates the passing of a century since the bloody revolutionary events which radically transformed the lives of Christians in our country, and the echoes of which exerted an influence on the state of Orthodox Christianity in America. Yet, the Russian Church withstood the crucible of fiery privations and was strengthened through suffering. Accomplished by the Russian ascetics on the American continent, the fruit of the Lord’s seed which brings salvation has survived and has received a new harvest in growth. Its present full life is inseparable from its history, and the joys and successes of the Church in America were and remain the glory in the Lord of the Russian Church according to Christ’s words: “Sower and reaper may rejoice together” (Jn 4:36).

“I extend my heartfelt congratulations to all here present on the continuing feast of Holy Pascha. May the joy in the risen Christ never leave our hearts. Christ is risen!”

The DECR chairman thanked Metropolitan Tikhon for the invitation to visit St. Nicholas Cathedral and concelebrate the Divine Liturgy there. Metropolitan Hilarion also cordially greeted Protopresbyter Daniel Hubiak and Matushka Evdokia, sharing with the parishioners his recollections of the time when he and Fr. Daniel had served together at the Church of the Great Martyr Catherine in Moscow.