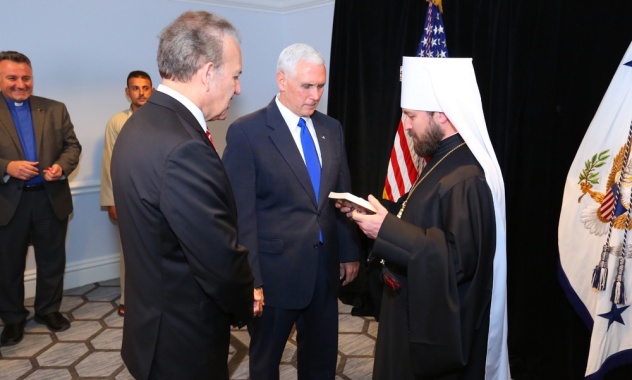 On 11 May 2017, the Vice President of the Unites States Michael R. Pence met with religious leaders of different Christian confessions at the Mayflower Hotel in Washington before a plenary session of the World Summit in Defense of Persecuted Christians.

In the talk with high-ranking American politician Metropolitan Hilarion of Volokolamsk, chairman of the Moscow Patriarchate’s Department for External Church Relations, expressed confidence in the necessity of forming a world anti-terrorist coalition with the United States of America and the Russian Federation as its participants to overcome terrorist threat.

The DECR chairman underscored the impossibility of conquering terrorism by several coalitions in confrontation with one another.

Other issues of mutual interest were also touched upon during the talk. Metropolitan Hilarion presented the Vice President of the United States with the English version of the book “Patriarch Kirill in his own words” which contains the thoughts of the Primate of the Russian Orthodox Church.

After his meeting with religious leaders the Vice President of the United States addressed the participants of the Summit. He greeted them and said: “I’m a Christian, a conservative, and a Republican, in that order.” He recalled his travels to the Middle East and his meetings with political and religious leaders, mentioning “genocide against people of Christian faith.”

Michael R. Pence brought greeting to the participants in the Summit from the President of the United States and said: “Protecting and promoting religious freedom is a foreign policy priority of the Trump Administration.”