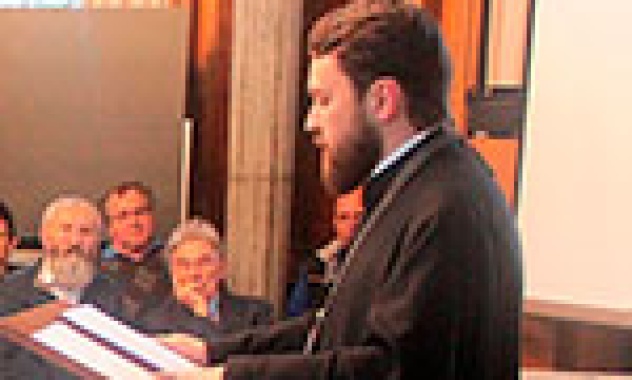 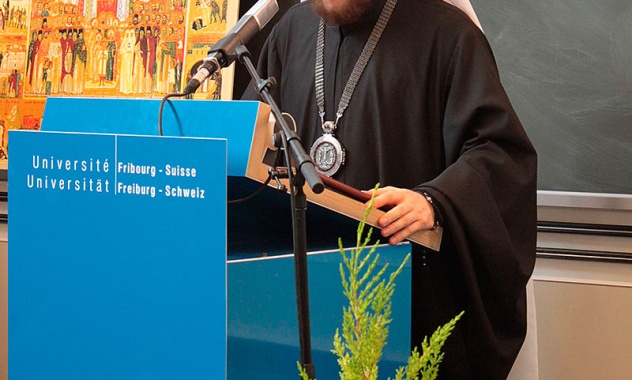 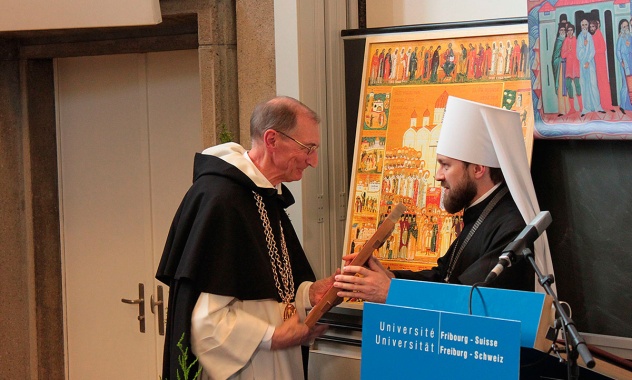 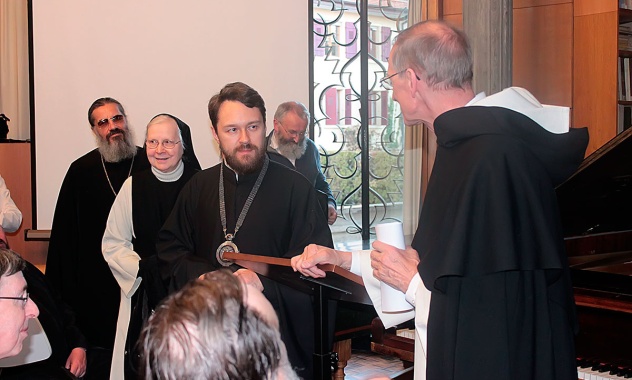 On 25 March 2011, the commemoration day of St. Simeon the New Theologian, Metropolitan Hilarion of Volokolamsk, chairman of the Moscow Patriarchate’s Department for External Church Relations (DECR) and rector of the Ss Cyril and Methodius Church Postgraduate and Doctoral School, was awarded the title of titular professor of the University of Fribourg, Switzerland.

Metropolitan Philaret of Minsk and Slutsk, Patriarchal Exarch of All Belarus, and Cardinal Kurt Koch, President of the Pontifical Council for Promoting Christian Unity, have arrived in Fribourg to take part of the ceremony of awarding.

The guests and participants of the ceremony also included Metropolitan Jeremiah of Switzerland (Patriarchate of Constantinople); Archbishop Ionafan of Tulchin and Bratslav; Bishop Nestor of Korsun; Bishop Sofian of Brashov (Romanian Orthodox Church); archpriest Mikhail Gundyaev, representative of the Moscow Patriarchate at the World Council of Churches and to the international institutions  in Geneva; hieromonk Alexander (Siniakov), rector of the Russian Orthodox Seminary in Paris; hieromonk Gabriel (Bunge), hieromonk Nikodim (Pavlinchuk) and deacon Augustin Sokolowski of the Korsun diocese; a delegation of the Minsk Faculty of Theology; and clerics of the communities of the Local Orthodox Churches in Switzerland, Italy, and France.

The Catholic Church was represented by the Apostolic Nuncio to Switzerland, Archbishop Francesco Canalini; Bishop Mengiste Ab Tesfa Mariam; acting administrator of the Diocese of Fribourg Bishop Pierre Farine; and Rev. Nicholaus Wyrwoll, director of the Institute of Eastern Churches in Regensburg.

Rev. Gottfried Locher, President of the Federation of Swiss Protestant Churches; Ms. Isabelle Chassot, minister of public education, culture and sport of the canton of Fribourg; director of the department of culture Gérald Berger, and other representatives of secular and church public attended the ceremony.

Minsister of Education of the Canton of Fribourg Ms. Isabelle Chassot underscored that a bishop of the Russian Orthodox Church becomes titular professor of the Faculty of Theology of the University of Fribourg for the first time. The Swiss Confederation should give an example of the dialogue of traditions and be a place of bringing witness about Christian values to the modern world, in which Christians constitute the three quarters of those persecuted on religious grounds.

Minister Chassot noted that the entire Christian civilization is endangered at present. She expressed her support of an appeal to establish an alliance for preserving traditional moral values repeatedly made by Metropolitan Hilarion in his addresses. In conclusion of her address, she expressed hope for the students of the Faculty of Theology to be educated in the spirit of dialogue, playing an important part in which could be the cooperation agreement between the University of Fribourg and the Church Postgraduate School signed that same day.

Professor Dr. Mariano Delgado, dean of the Faculty of Theology of the University of Fribourg, said that Metropolitan Hilarion’s works were topical because the Orthodox hierarch always speaks about the life in Christ in modern context.

Prof. Delgado presented the diploma of professor of the University of Fribourg to Metropolitan Hilarion on behalf of the faculty.

Metropolitan Philaret of Minsk and Slutsk noted that the awarding of Metropolitan Hilarion is an important event in the life of Christian theology. According to the Patriarchal Exarch of All Belarus, European Christians should show the intransient value of the commandments of Christ to the continent. He underscored that the terrible natural disasters in the world remind people of the fragility of modern civilization and the uselessness of life without God. Metropolitan Philaret said that Switzerland with its experience of struggle for human freedoms is bringing an important witness to the world. He reminded the audience of the long cooperation between the University of Fribourg and the Minsk Theological School and gratefully mentioned a particle of relics of St. Nicholas, brought from Fribourg as a gift to the Minsk cathedral church.

Cardinal Kurt Koch, President of the Pontifical Council for Promoting Christian Unity, greeted the participants in the ceremony and mentioned the connection of this important academic event with the Feast of the Annunciation celebrated on this day according to the Gregorian calendar, as theology is called to be a science of Christian joy and joy in God. Cardinal Koch delivered a lecture on the meaning of theology on the way from Eden to the Marriage of the Lamb.

After the ceremony, Metropolitan Hilarion visited the Faculty of Music and delivered a report on “Psalms in the Orthodox Tradition.” Cardinal Kurt Koch, President of the Pontifical Council for Promoting Christian Unity, the faculty and students of the University of Fribourg attended.