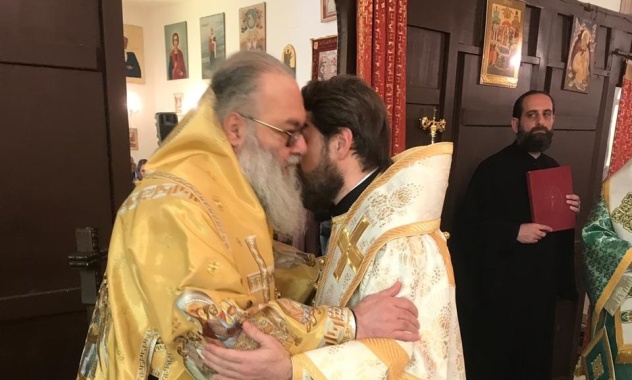 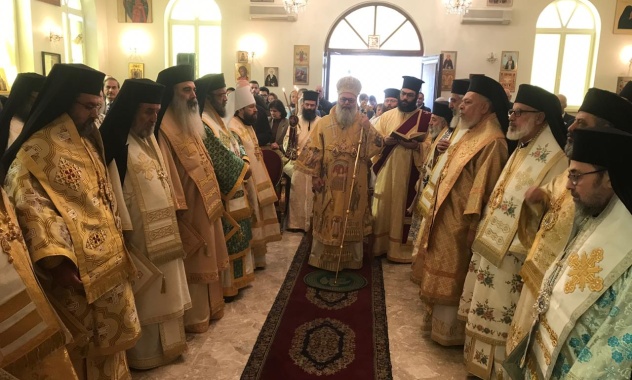 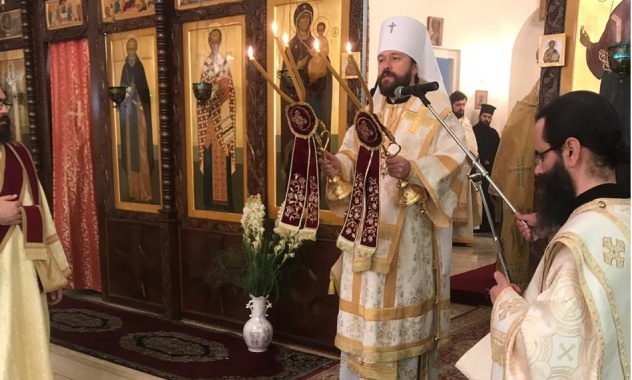 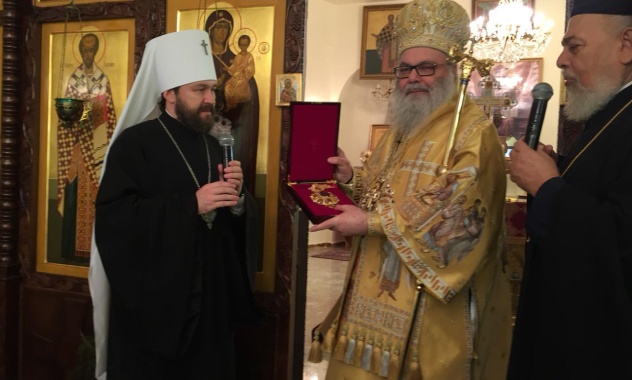 Present at the service were also Cardinal Marion Zenari, nuncio of the Holy See in Syria; members of the delegation of the Interreligious Working Group of the Presidential Council for Cooperation with Religious Organizations, and Russian diplomats.

In his homily after the liturgy, His Beatitude John X pointed to the significant role played by the ROC Damascus Representation, which, just as the Moscow Representation of the Church of Antioch, serves as an important connecting link between the two Churches.

The DECR Chairman Metropolitan Hilarion, in his address, said:

‘Your Holiness, Your Eminences and Graces, dear Fathers, Brothers and Sisters! Let me greet you, Your Beatitude, and your whole God-saved flock on behalf of His Holiness Kirill, Patriarch of Moscow and All Russia.

His Holiness Kirill visited Syria and Lebanon at the moment when military actions began in the Syrian land. During the whole time as these hostilities continued and terrorists outraged in the Syrian land, the Russian Orthodox Church lifted up ardent prayers for the restoration of peace and harmony in Syria. Immediately after his return from Syria, His Holiness Patriarch Kirill appealed to President Vladimir Putin to make the protection of persecuted Christians in Syria and other countries in the Middle East one of the main vectors of Russia’s foreign policy. We can see that Russia has made a decisive contribution to the defeat of terrorists in the blessed Syrian land, and today we thank God for the fact that these Satan’s servants are driven away and the country has begun to be restored, although there is still much to be done.

On behalf of His Holiness Patriarch Kirill and the whole multinational and millions-strong Russian Orthodox Church, I would like to assure you that our Church always was and will be with your Church. You are a successor of the great saint, Ignatius the God-Bearer. We are in the church dedicated to him. St. Ignatius the God-Bearer wrote in one of his letters, ‘I am the wheat of God: let the teeth of animals crumble me up so that I may become a pure offering to Christ”. And we know that many Christians have suffered in the last years and become God’s wheat offered to the Saviour. We also know that many are missing and among them is your brother, His Eminence Metropolitan Paul of Aleppo who was kidnapped over five and a half years ago and taken away in an unknown direction together with Metropolitan Gregory Ibrahim from the Syriac Orthodox Church, and we know nothing about his fate. But we continue praying for the both metropolitans and for their good health. We hope that a miracle will happened and they will come back to us and to their flock.

Many wounds have been inflicted on Syria by this terrible war. We hope that through our common efforts we will gradually heal these wounds. On behalf of the Russian Orthodox Church, I would like to express to you, Your Holiness, the words of gratitude for your confessor’s service to the Syrian and Lebanese land.

I would like to express cordial gratitude on behalf of the whole Russian Orthodox Church to your representative in Moscow, His Eminence Niphon, Metropolitan of Philippople, who, for already four years now, worthily and righteously has represented your great Church to the Patriarch of Moscow and All Russia. Quite recently, he has marked the 30th anniversary of his service in the hierarchal rank.

In the presence of Your Beatitude, I would also like to thank warmly our representative to the Patriarchal See of Antioch, Hegumen Arseny (Sokolov). Father Arseny began his service in Lebanon and at the very height of military actions, when bombs were still dropped on Syria, he suggested to me and through me to His Holiness Patriarch Kirill that the Russian Orthodox Church Representation be returned from Beirut to Damascus. Despite the continuing war, which was unsafe for his life, he came over here and began restoring church life here. On behalf of His Holiness Patriarch Kirill, I thank you, Father Arseny, for your service and wish that the Lord may help you in your life journey’.

Metropolitan Hilarion presented the primate of the Orthodox Church of Antioch with a holy pectoral icon as a gift from Patriarch Kirill.

He also presented the rector of the Representation, Father Arseny (Sokolov) with an award of the Department for the External Church Relations – a Medal of St. Mark of Ephesus, in recognition of his selfless and zealous service of the Church.

Then a reception took place at the Representation’s main hall. Invited to it were Patriarch John X of Antioch, hierarchs and clergy of the Patriarchate of Antioch, and representatives of religious confessions in Russia and Syria.