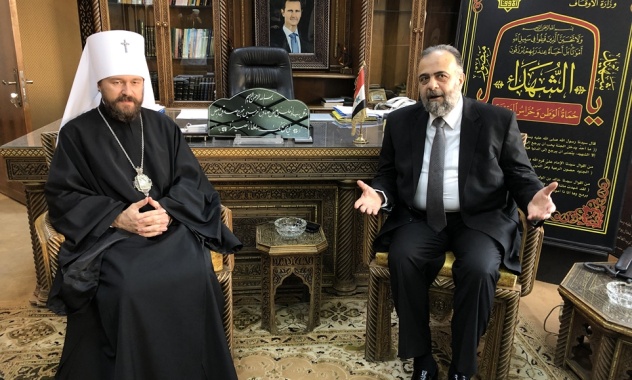 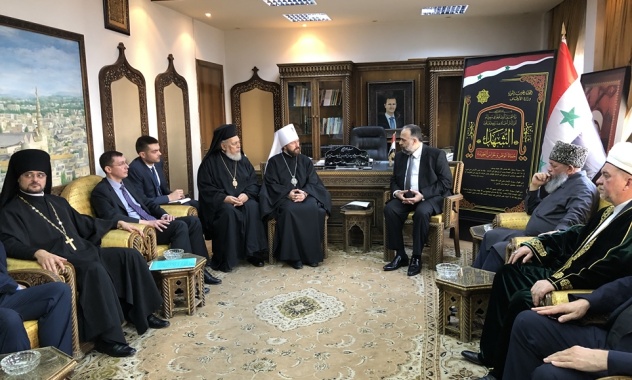 On 17 November 2018, Metropolitan Hilarion of Volokolamsk, chairman of the Moscow Patriarchate’s Department for External Church Relations, visited the Ministry of Awqaf of the Syrian Arab Republic and met with the Minister, Dr. Mohammad Abdul-Sattar al-Sayyed. Taking part in the meeting were also Islamic leaders of Damascus and members of the Russian delegation that had arrived in Syria together with Metropolitan Hilarion.

The Minister greeted the guests on behalf of the Government of the Syrian Arab Republic and thanked them for visiting the Syrian land with the view of promoting the humanitarian initiatives aimed at rendering aid to the Syrian people. He also expressed gratitude to His Holiness Patriarch Kirill of Moscow and All Russia, the religious communities of Russia and the Russian government for rendering assistance to the suffering Syrians, and noted that it is thanks to the Russian aid that a large part of Syria was liberated from terrorists.

Metropolitan Hilarion of Volokolamsk greeted the Minister on behalf of His Holiness Patriarch Kirill of Moscow and All Russia, noting that one the major tasks now is the restoration of peaceful life and infrastructure, including the religious one, in Syria. As Metropolitan Hilarion noted, the Russian Orthodox Church and the Russian religious communities will support this good endeavour. He added that the delegation which includes representatives of the Muslim and Protestant communities of Russia and of the Administration of the President of the Russian Federation arrived in Syria to discuss possible projects in this sphere.

After the meeting the Minister of Awqaf gave a dinner in honour of Metropolitan Hilarion of Volokolamsk and the delegation that accompanied him.