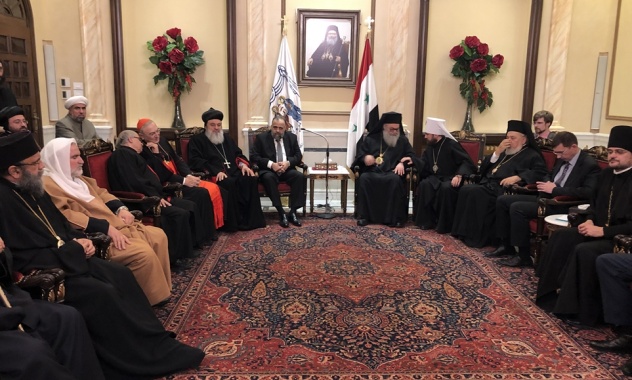 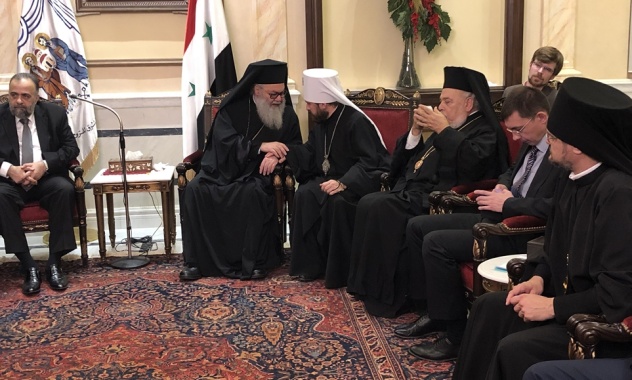 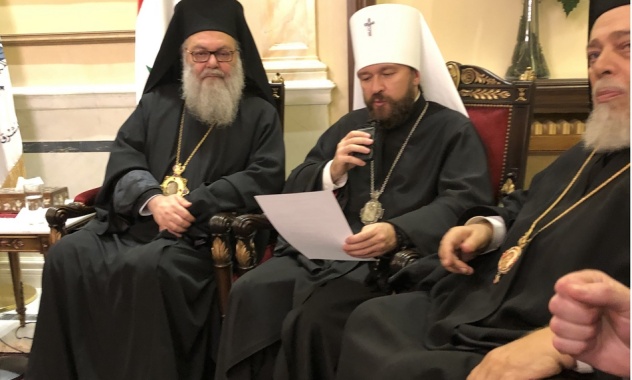 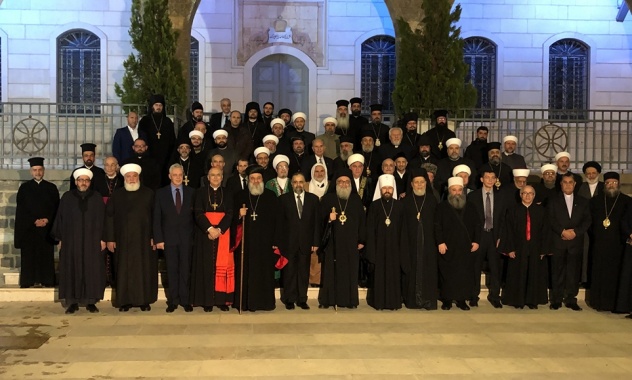 On November 17, 2018, a conference of the heads and high-ranking representatives of traditional religious communities in Syria and the interreligious delegation from Russia, headed by Metropolitan Hilarion of Volokolamsk, chairman of the Moscow Patriarchate department for external church relations (DECR), took place at the main hall of the Patriarchate of Antioch at the Cathedral of the Dormition in Damascus.

The event was initiated by the Russian Orthodox Church and was timed to the DECR chairman’s visit to Damascus. The aim of the meeting was to discuss further cooperation between Christians and Muslims in Russia and Syria in the area of aid to the suffering Syrian people.

From the Syrian side, the conference was attended by His Beatitude John X, Patriarch of Antioch and All the East; His Holiness Patriarch Mor Ignatius Aphrem II of the Syriac Orthodox Church; Sheikh Muhammed Abdul-Sattar al-Sayyed, Syria’s Minister of Aqwafs; Cardinal Mario Zenari, apostolic nuncio in Syria; and other prominent representatives of the Armenian Apostolic Church diocese of Damascus and Evangelical Church in Damascus; as well as Sheikh Bashir Eid al-Bari, Supreme Mufti of Damascus; Islamic leaders and scholars, high-ranking state officials and parliament members; representatives of Islamic youth, bishops and clergy of the Orthodox Church of Antioch, Syriac Orthodox Church, Melkite, Maronite, Syriac Catholic and Armenian Catholic Churches.

Participating in the conference from the Russian side were S. Melnikov, executive secretary of the Presidential Council for Cooperation with Religious Associations; M. Rakhimov, chairman of the executive committee of the North Caucasus Muslim Coordinating Center; I. Ziganshin, imam-mukhtasiv of the Tyumen Region; I. Ziganshin, member of the Presidium of the Central Muslim Board; S. Ryakhovsky, presiding bishop of the Russian Union of Christians of the Evangelical Faith; M. Dzhelalettdinov, imam-muhtasaib of the Nizhni Kamsk region, Tatarstan; as well as DECR staff members responsible of inter-Christian and interreligious relations and humanitarian aid  to Syria; and representatives of public organizations.

Greeting the participants, Patriarch John X expressed deep gratitude to Patriarch Kirill of Moscow and All Russia for the work carried out by the Russian Orthodox Church to give aid to Syria. His
Beatitude described the visit to Damascus by the interreligious delegation led by Metropolitan Hilarion and the high-level conference attended by representatives of Syrian religious communities an event of extraordinary importance for the development of further cooperation.

The next speakers, the Syrian Minister for Awqufs, thanked the Russian state for the help in delivering Syria from terrorists and the religious organization in Russia for their humanitarian aid and solidarity with the Syrian people. The minister said that the conference was attended by heads and high-ranking representatives of all the major religious communities in Syria, which intend to continue such a successfully developing cooperation with Russian colleagues. Judging by the membership of the conference from the both sides, this event is unprecedented.

Greeting the high gathering on behalf of the Syriac Orthodox Church, Patriarch Mor Ignatius Aphrem II said that the Syrian people see in Russian brothers reliable partners in the task of restoration of the country and need their help and accept it with gratitude.

Cardinal Mario Zenari, in his remarks, gave a high value to the humanitarian work carried out in Syria by Russian religious communities and said that he had met with their representatives on several occasions.

In his address, Metropolitan Hilarion shared, in particular, his remembrances of the visit made by Patriarch Kirill of Moscow and All Russia in 2011. ‘Many warned against that visit – it is unsafe there. But he replied: I must go because if the Syrian people are suffering I should be with them’, the metropolitan said and stressed that the Russian Orthodox Church and the Russian people and state officials, too, took to heart the suffering of the Syrian people.

The conflict in Syria, which has caused so many deaths and so much human grief was not born in this land but was provoked by those who had created similar conflicts in Iraq and later in Lebanon and want to make the same in Syria, the metropolitan said. ‘But the Russian president and Russian army set a powerful covering force against these plans to destroy Syria. And we can see today a peaceful sky above almost all Syria; we see the major part of the territory liberated from terrorists’, the hierarch stated.

The DECR chairman continued as follows:

‘Now a considerable work is ahead to restore the country, its destroyed infrastructure and to create conditions for people to come back to their home places.

The Russian Orthodox Church and other traditional confessions of the Russian Federation seek to make their own contribution to the revival of Syria. And I have come here as head of a large delegation consisting of representatives of Russian Islam, a representative of Russian Protestantism, a representative of the Presidential Administration. We have come, first of all, to support you and say that we are with you. Secondly, we have come to hear about specific needs of the Syrian people, Syrian Church and religious confessions and to develop charity programs that we can continue through common efforts.

This year, the Interreligious Working Group for Aid to Syria under the Presidential Council for Cooperation with Religious Associations had collected 77 tons of humanitarian supply that was distributed to Christian and Muslim families and people of other religious communities.

We have initiated a program for rehabilitation of Syrian children victims of explosions and terrorist actions. Some children had their limbs torn away, others lost their sight and still others suffered other serious traumas. We are engaged in arranging prosthetics and psychological rehabilitation for children victims and would like to continue this work by giving assistance to Syrian doctors engaged in this work in Syria.

It is very difficult to assess the scale of the tragedy that has happened in Syria. But step by step we should also restore the infrastructure and, most importantly, human lives. Many buildings including churches and mosques have been destroyed by explosions and bombing by various coalitions. To make Syria revive it is necessary to revive these holy places as well. It is a considerable work but Russian religious confessions and the Russian state are ready to take part in it to the best of our abilities and resources.

I would like once again to testify that the Russian Orthodox Church and Russia were, are and will be with you. I would like to wish God’s help and peace to all the Syrian people’.

Greeting the gathering, Mr. S. Melnikov of the Presidential Directorate for Domestic Policy, emphasized that Syria and Russia have a very similar historical fate, since the both are multinational and multi-confessional countries. ‘Both Russia and Syria have encountered the threat of international terrorism which tries to act under pseudo-religious slogans’, he noted, ‘Russia defeated this threat in the last century 90s. Syria has encountered it now. We are very glad that the Syrian people, with Russia’s help, are coming off victorious in this war. The membership of the Russian delegation on this visit to Syria shows that the movement for giving humanitarian aid to the population of this country is involving an increasing number of Russian religious organizations. Thus, with us today is one of the leaders of the Northern Caucasus Muslim Coordinating Center uniting all the Muslims in that Russian region and also representatives of the leadership of the Republic of Tatarstan Muslim Board’.

Mufti M. Rakhimov, who greeted the Syrian members in Arabic, assured them that the Muslims of Northern Caucasus with great enthusiasm would take part in the project for giving aid to the Syrian people together with other confessions in Russia.

Then other participants in the conference took the floor.

After the meeting, a dinner was given on behalf of His Beatitude Patriarch of Antioch.