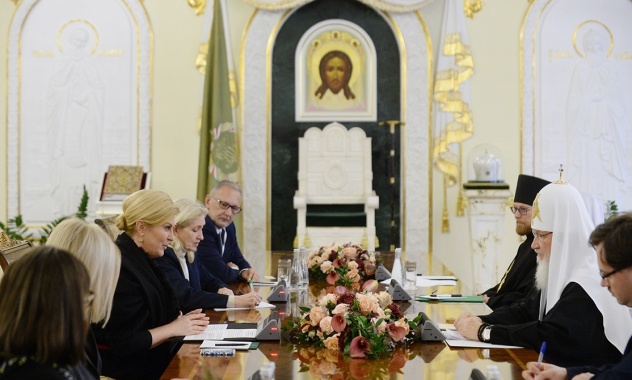 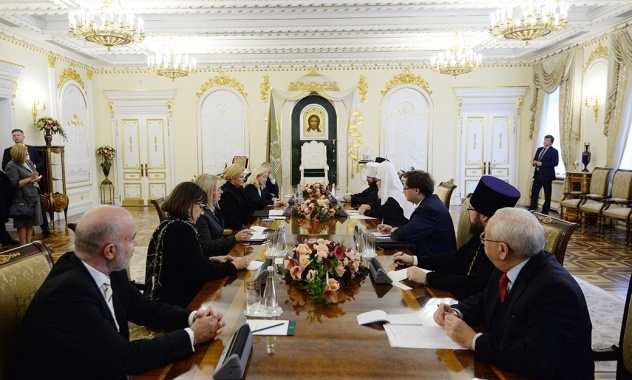 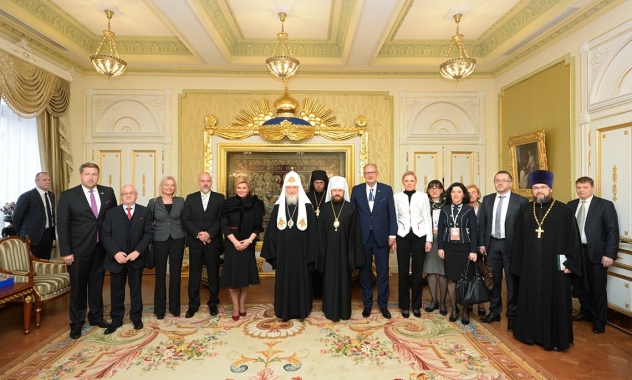 On 19 October 2017, His Holiness Patriarch Kirill of Moscow and All Russia met with H.E. Kolinda Grabar-Kitarović, President of the Republic of Croatia, at the Patriarchal and Synodal residence in St.Daniel’s monastery.

Taking part in the meeting from the Croatian side were Ms Anamarija Kirinić, Chief of staff, Office of the President; Mr. Davor Božinović, Minister of the Interior; Ms Zdravka Bušić, State Secretary, Ministry of Foreign and European affairs; H.E. Tonći Stanićić, Ambassador Extraordinary and Plenipotentiary of the Republic of Croatia to the Russian Federation.

His Holiness Patriarch Kirill warmly greeted the high guest and her entourage and said that good relationships were developing between the Russian Orthodox Church and the Croatian leadership. He continued to say: “During my first visit to Croatia in 2001 I had an opportunity to meet with the then head of the state, get acquainted with the religious situation and with the life of the people. Since then our representatives visited Croatia many times, and we appreciate the level of relations between the Russian Orthodox Church and Croatia.”

His Holiness mentioned the presence of the Russian minority in the Republic of Croatia, saying: “Though it is a relatively small community, I would like to note that the Russian language is included into the curriculum of some educational institutions of the country thus providing favorable conditions for the life of Russian people in Croatia.”

His Holiness dwelt on the centuries-long history of god relations between the Russian Orthodox Church and the Serbian Orthodox Church which is represented in Croatia by Metropolitan Porfirije of Zagreb and Ljubljana. Patriarch Kirill recalled that during his visit to Croatia in 2001 he and Metropolitan Jovan of Zagreb met with the President of Croatia for the first time… “I remember with gratitude the country leadership’s kind treatment of the Serbian Orthodox community.”

His Holiness Patriarch Kirill also spoke about the dynamic development of relations of the Russian Orthodox Church with the Roman Catholic Church to which the majority of the Croatians belongs. “We take a common stand on the main ethical problems which trouble people of today. Both the Russian Orthodox Church and the Roman Catholic Church feel concern about persecution of Christians, most notably in the Middle East and – regrettably – not only in this region of the world. During my meeting in Havana with Pope Francis last year we focused our discussion on how to defend the presence of Christians in the Middle East and in other regions.”

The upholding of moral values in the life of the people of today is another important item on the agenda of the Catholic-Orthodox cooperation. We have the same attitude to the so called alternative marriages, on euthanasia, abortions or anything that we deem dangerous to the integrity of the human person.” This common stand is a very important factor conducive to the consolidation of the position of Christians in the face of present challenges.

His Holiness continued to say: “We appreciate the beginning of the dialogue between the Catholic Church and the Serbian Orthodox Church that includes very sensitive issues of the modern history of Croatia in the 20th century. We know that common ground has not been reached, but we believe that the dialogue will help its participants to clear up their positions and to narrow the gap.” Hope was expressed that the dialogue will contribute to reconciliation and establishment of a more sustainable society.

His Holiness Patriarch Kirill wished the President of Croatia to have a successful visit.

H.E. Kolinda Grabar-Kitarović thanked the Primate of the Russian Orthodox Church for the cordial hospitality and said that it was a privilege to meet with him and talk about cooperation.

The President of Croatia highly appreciated the position of the Russian Orthodox Church on the inter-Christian and inter-religious activity for the prevention of wars and disorders and for the cessation of the persecution of Christians in different regions of the world.  She told the Primate of the Russian Orthodox Church about the principles on which the relations of the state with religious communities in Croatia are based, mentioning a provision of the Constitution on state assistance to them and saying: “We consider religious associations as partners who help us defend positive values that have been lost on different reasons, for instance, due to military actions or persecutions. Also, they help us uphold spiritual values which are being put in jeopardy in the present-day world.”