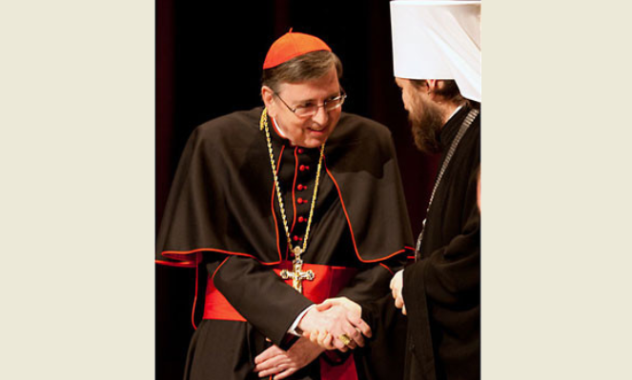 On September 19, 2016, Metropolitan Hilarion of Volokolamsk, head of the Moscow Patriarchate’s department for external church relations (DECR), met with Cardinal Kurt Koch, president of the Pontifical Council for Christian Unity, in Chieti, where the Joint Commission for Theological Dialogue between the Orthodox Church and the Roman Catholic Church is holding its 15th plenary session.

They discussed the state of the Orthodox-Catholic theological dialogue and the progress made in bilateral relations between the two Churches since the historic meeting between His Holiness Patriarch Kirill of Moscow and All Russia and Pope Francis of Rome on February 12, 2016, in Havana.

Metropolitan Hilarion pointed out to the positive dynamic of these relations. At the same time, the DECR chairman shared with his interlocutor his profound concern over hostile statements and actions recently made with regard to the Moscow Patriarchate and the Ukrainian Orthodox Church by leaders of the Ukrainian Greek Catholic Church. He also expressed the conviction that the issue of unia needs to be revisited by the Joint Commission for Orthodox-Catholic Dialogue.

The both sides noted the fruitful development of cooperation between the Russian Orthodox Church and the Roman Catholic Church in the field of culture. In the recent year, progress has been made in the exchange program of academic trips by clergy and theological students from the Roman Catholic Church and the Moscow Patriarchate to Moscow and Rome respectively. The interlocutors agreed that this project has good prospects and should be realized in an annual basis.

They also considered other matters of mutual concern.

They were joined in their talk by Rev. Hyacinthe Destivelle, Pontifical Council for Promoting Christian Unity, and Rev. Alexis Dikarev, Department for External Church Relations.