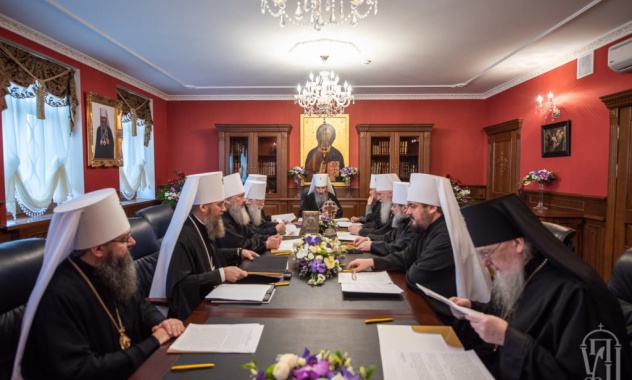 On 18 March 2020, the Holy Synod of the Ukrainian Orthodox Church met at the Kiev Pechersk Monastery of the Dormition. The session was chaired by His Beatitude Onufriy, Metropolitan of Kiev and All Ukraine.

Metropolitan Onufriy informed the meeting about his trip to Amman, Jordan, to attend the meeting of Primates and representatives of Local Orthodox Churches, which took place on 25 February 2020. The Synod noted the importance of that meeting as a first step towards a settlement of the crisis in the world Orthodoxy. It was stated that as of today the main problem for Orthodoxy lies in the mistaken erroneous ecclesiology held by the Patriarchate of Constantinople, which has led to its uncanonical actions in Ukraine. It was also noted that the solution of the Ukrainian church problem is an urgent need for the world Orthodoxy.

The Synod took notice of the information given by the Primate of the Ukrainian Orthodox Church about his visit to Montenegro from February 27 to 29, 2020. His Beatitude took part in the celebrations held on the commemoration day of St. Simeon the Myrrh-Flowing and the 800th anniversary of the foundation of today’s Metropolis of Montenegro. He led a divine service and processions with the cross in which over 100 thousand people participated. The Synod thanked His Holiness Patriarch Irenaeus of Serbia and Metropolitan Amfilohije of Montenegro and the Littoral for the invitation and warm welcome, pointing out to the importance of con-celebration, fellowship and mutual support.

Of special importance are the decisions of the Ukrainian Orthodox Church Holy Synod on the particulars of church life in the situation of the outbreak of Covid-19 coronavirus. In particular, the need was underscored to preserve calm and not yield to panic. The clergy, monastics and laity were called to fervent prayer. The Synod adopted the text of a prayer and petitions to be said at the litany to be lifted up during the Divine Liturgy in the quarantine period.

The Synod stated that today churches are open and divine services are celebrated in them. It was also deemed advisable to pray during the quarantine time with the sprinkling of holy water and tolling of bells. Besides, the Synod stressed the need to be attentive to the decisions and recommendations of the Ukrainian Healthcare Ministry and state bodies concerning anti-epidemic measures and restrictions. In case of a need for additional restrictions, diocesan bishops are instructed to co-ordinate their decisions with the Primate of the Ukrainian Orthodox Church.

The Synod also adopted a Message in View of the Spread of the Covid-19 Coronavirus.

Having considered reports from diocesan bishops, the Synod approved the appointment of abbots and abbesses of several monasteries and convents.

The Synod included in the Assembly of New Martyrs of Berdyansk the saints who carried out their service in the Diocese of Berdyansk and approved the Assembly’s Troparion, Kotakion and Prayer. In addition, the holy martyrs, Fathers Vasiliy Vakhnin, Feodor Roamnovsky and Iosif Chekhranov were ranked as locally venerated saints of the Diocese Kamenka and the troparion, kontakon and prayer to these men of God and their iconic images were approved.