Primate of Russian Orthodox Church meets with Archbishop of Canterbury 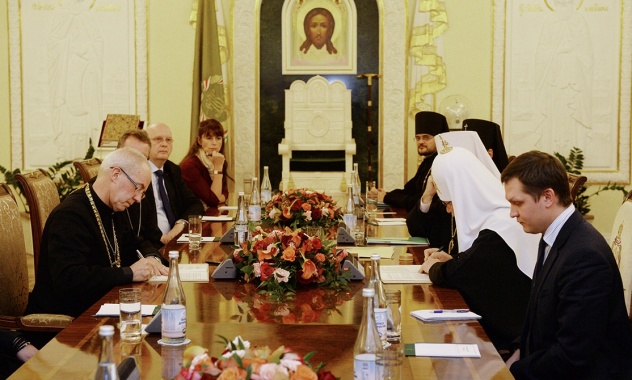 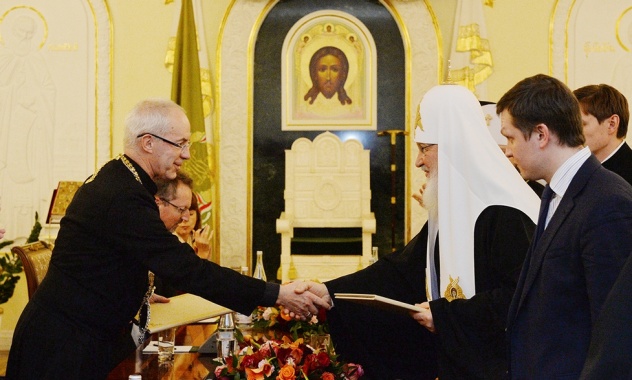 On 21 November 2017, at the Patriarchal and Synodal Residence in St. Daniel’s Monastery in Moscow, His Holiness Patriarch Kirill of Moscow and All Russia met with Archbishop of Canterbury Justin Welby, head of the Anglican Communion.

The Primate of the Russian Orthodox Church noted that he was glad to continue the conversation with Archbishop of Canterbury Justin Welby, which had begun in London in 2016 during His Holiness’s visit to Great Britain.

Pointing out that the Russian Orthodox Church and the Anglican Communion have been maintaining contacts since the 16th century, Patriarch Kirill said, “In those far-off ages, long before Christians entered into intensive dialogue and cooperation, the Russians and the Englishmen, belonging to different confessions, had an opportunity to meet and get to know each other.”

As His Holiness Patriarch Kirill of Moscow and All Russia mentioned, the Coordinating Committee for Cooperation between the Russian Orthodox Church and the Church of England has been working successfully over the past twenty years. “I would also like to note with satisfaction that with the assistance of the Russian Embassy in Great Britain and the British Embassy in Moscow, various meetings took place, including symposiums on the future of Christianity in Europe. I find such meetings particularly helpful at this difficult time,” His Holiness added.

One of the spheres, in which the cooperation between the two Churches has been successfully promoted, is student exchange. “Some of our students continue their education in Great Britain,” Patriarch Kirill said, “And in Russia we organized at Ss. Cyril and Methodius Theological Institute of Postgraduate Studies the Summer Institute for representatives of the Church of England. This project enables the clergy of the Anglican Church to learn more about the life of the Russian Orthodox Church, about our liturgy, spirituality and social ministry.”

His Holiness also noted the signs of crisis in today’s society, saying, “Humanity has now sunk into, I dare say, a very grave global crisis. It means not only the economic difficulties facing almost the whole world. The number of wars has also increased. When the Cold War was over, we all dreamed that a time of peace and cooperation would come. However, the number of local conflicts is growing, with their scale becoming threatening. The great powers are getting involved in these conflict situations. At the same time the ecological problems are also getting more complex. Politicians, economists and culture experts try to find answers why this all is happening. Yet, I think that we, Christians, should give our own answer: all the bad things in people’s lives happen because of human sin. If the global crisis increases, if evil acquires global dimension and radicalizes, it means that something goes on in peoples’ souls, and it comes with their falling away from God. We used to have such sentiments back in the Soviet Union and realized how negative was the influence of the atheistic propaganda in society on all spheres of life. However, that “atheization” had a weak point. It was a result of the propagation of an ideology, but ideologies do not live long. As soon as the ideology was gone, the atheistic propaganda stopped.”

What is going on today in the world, especially in the Western countries, is much more frightful than what had happened to religion in the Soviet Union, the Primate of the Russian Orthodox Church emphasized. “God is being forced out of people’s lives, and the Divine moral law is being ignored. What is particularly destructive is that the neglect of the Divine moral law takes on the form of state law. It is a very dangerous tendency. If people, using the force of the state law, will try to commit sin or associate themselves with sin, then we will enter into some apocalyptic reality,” His Holiness said.

Patriarch Kirill raised a question of whether the Christian communities are able to stop this process, able to perform a prophetic service. “Back in the Soviet times, when conducting the dialogue with our Western partners, we were off-put by one question: Can you criticize your government and its policy? We found it difficult to answer this question, because we lived under the totalitarian regime,” the Primate of the Russian Church noted, “And now we ask the Western Christians who do not live in a totalitarian society: Can you criticize your government, the mass media, and those in power? We should reflect on these topics together. That is why at this time of difficulties, first of all for the Western Christians, we in the Russian Church are not ready to give up our historical contacts with them. In an open and honest dialogue we try to clarify our positions and, to the extent possible, reach understanding on various issues and on what is going on in the world today.”

Having expressed his deep concern over the plight of Christians in the Middle East and North Africa, His Holiness Patriarch Kirill of Moscow and All Russia reminded the participants in the meeting that the Russian Church had been one of the first to draw the world community’s attention to the persecution of Christians in the Middle East, especially in view of the Syrian territories being captured by terror groups. “We saw churches being destroyed by terrorists, monasteries being desecrated, and believers in Christ being drawn out of the Valley of Christians in Syria,” His Holiness said, “Being well aware of what is going on in this region, we realized that the very existence of Christians is hanging by a thread. That is why we welcome the real victory over the terror groups in Syria, being secured through the efforts of many, including the Russian Federation.”

In 2016, the problem of the plight of Christians in the Middle East was at the core of the meeting between Patriarch Kirill of Moscow and All Russia and Pope Francis in Havana. “I thank God that it was during the meeting that the situation was described as genocide of Christian minority,” His Holiness said, “The political establishment tried to avoid this word, but later it became widespread at various levels, including the U.S. Congress. I believe that the bilateral meeting made its important contribution, helping change the world community’s attitude to the problem of Christian minorities.”

However, the problem of the preservation of the Christian presence in the Middle East remains acute, the Primate of the Russian Church noted. The Christian population in different countries of the region has decreased sharply. For instance, at present some 150 thousand Christians live in Iraq, while before the dramatic developments began there had been a million and a half Christians in the country.

His Holiness Patriarch Kirill also shared with the Archbishop of Canterbury his concern over the current religious life in Ukraine, saying, “Regrettably, there are forces that try to channel the deep civil conflict into the sphere of religion. With full responsibility I speak of the grossest violations of human rights and religious freedom in Ukraine today: church buildings of the canonical Orthodox Church, against which an absolutely unbridled propaganda is being carried on, are being seized. It seems that the Ukrainian authorities want to divide their people on religious grounds as well. It is hard to understand what they are guided by, but, perhaps, the most terrible thing that can happen to Ukraine in its current state is a serious religious conflict.”

As Patriarch Kirill reminded all those present, the radical nationalist deputies also proposed to pass at the Verkhovna Rada several bills that would legalize the seizure of church buildings and discrimination against the Ukrainian Orthodox Church, which has 12 thousand parishes and unites an absolute majority of the Orthodox Christians in Ukraine.

“I thank many people who responded to my appeal to speak out against these bills. I am particularly grateful to His Holiness Pope Francis and the General Secretary of the World Council of Churches, Rev. Olav Fykse Tveit, as well as to my brothers the Primates of the Local Orthodox Churches. Through the joint efforts, these bills were halted. Yet, we have no guarantees that they will not appear again in the agenda of the Ukrainian parliament.”

His Holiness handed over to the head of the Anglican Communion a document describing the current situation of the Ukrainian Orthodox Church in Ukraine.

The Primate of the Russian Orthodox Church also mentioned a visit of Archbishop of Canterbury Justin Welby to St. Andrew’s Anglican Church in Moscow that had taken place the day before.

His Holiness said in particular, “As far back as 1994, during her visit to Russia, Her Majesty Queen Elizabeth raised an issue of giving this church to an Anglican community at a meeting with President Boris Yeltsin. For various reasons and because of the problems within the Anglican community, the decision was not implemented. I also received requests, including those from the Anglican community. In summer 2016, I applied to the Government, asking to give the complex of buildings of St. Andrew’s Church to the Anglican community in gratuitous use for 49 years. I welcome the changes taking place in the life of this community today and the appointment of its new chaplain. I hope that the community will develop and the church will be fully restored.”

As His Holiness noted, the Russian Church asked the Moscow authorities to include St. Andrew’s Anglican Church in the general programme of restoration of architectural monuments in Moscow. The Department for External Church Relations and its chairman Metropolitan Hilarion of Volokolamsk take an active part in the implementation of this programme.

Addressing the Primate of the Russian Church, Archbishop of Canterbury Justin Welby said in particular, “I am full of the privilege and the pleasure to be here on my first visit to Russia, and I thank you most warmly for your fraternal hospitality.” He shared his recollections of the visit of His Holiness Patriarch Kirill to Great Britain, during which the Primate of the Russian Church consecrated the Cathedral of the Holy Dormition after the restoration and met with Queen Elizabeth II of Great Britain and with the Archbishop of Canterbury.

“You have raised both particular and global questions. You rightly said that they are linked to the questions of anthropology and the nature of the human being,” the head of the Anglican Communion added.

The Archbishop of Canterbury said he agreed with His Holiness Patriarch Kirill that “the hegemonic atheism and secularism pose a challenge to free expression of religious and especially Christian views.”

Among the issues that the head of the Anglican Communion considered important to discuss with the Primate of the Russian Orthodox Church was the problem of extremism and terrorism in the Middle East and other parts of the world, the situation of Christians and other religious minorities in these regions, and the problem of refugees. According to different estimates, there are now 65 million refugees in the world, the Archbishop of Canterbury pointed out.

The persecution of Christians in the Middle East is a matter of global crisis, Archbishop Justin Welby noted. “In what you said about the pressure on Christian expression in many Western countries, I want to emphasize the importance of our discussions and of our fellowship, for indeed through our conversations we are able to strengthen one another,” he said, “And in coming to Russia, with its history after 1917, I am reminded of the example of courage and faithfulness shown by the Russian Orthodox Church – a courage which sets the challenge to churches around the world during long periods of difficulty.”

As the result of the meeting, His Holiness Patriarch Kirill of Moscow and All Russia and Archbishop of Canterbury Justin Welby signed a joint declaration in support of Christians in the Middle East.