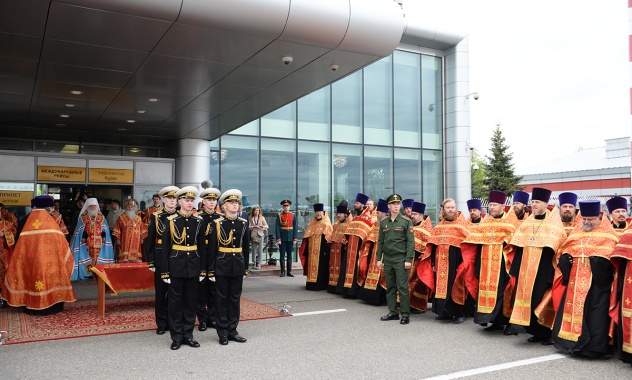 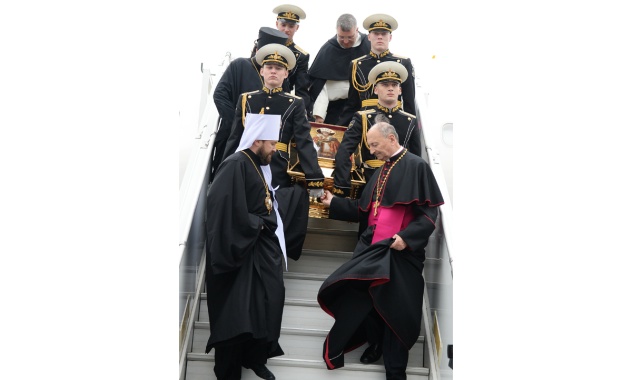 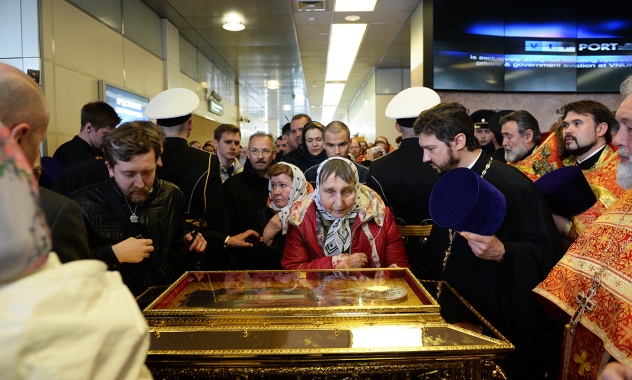 On 21 May 2017, the shrine containing a particle of the holy relics of St. Nicholas the Wonderworker was delivered by special flight from the Italian city of Bari to Moscow.

Meeting the holy shrine at the Vnukovo Airport were hierarchs and clergy of the Russian Orthodox Church. The reliquary was solemnly carried in front of the ranks of the silent drill platoon of the Preobrazhensky Regiment.

Metropolitan Arseny of Istra, Patriarchal first vicar for Moscow, said a molieben of thanksgiving to St. Nicholas at the boarding stairs. Later, inside the airport, the akathistos was read before the shrine.

Concelebrating with Metropolitan Arseny were Bishop Feofilakt of Dmitrov, Bishop Savva of Voskresensk, and the Moscow clergy.

“By its significance, this event is unprecedented for our Church. It was the Russian Church which, as far back as the 11th century, several years after the relics of St. Nicholas had been brought from Myra in Lycia to Bari, established the feast in commemoration of that event. And every time on May 22, when we celebrate the commemoration day of St. Nicholas, we hear at the divine service the following words: “The day of the radiant feasting is here, the city of Bari rejoices, and the world exults…”

“And today the Russian Orthodox Church is rejoicing together with the Italian city of Bari, because St. Nicholas is visiting the country, whose people venerate and love him. In Moscow and in other Russian cities and towns great many churches are dedicated to St. Nicholas the Wonderworker.

“St. Nicholas is quick to hearken people’s prayers, and many have learned it from their own experience: whatever you ask him, he will respond to all your requests. That is why people venerate St. Nicholas the Wonderworker.”

From the airport, the reliquary will be delivered to the Cathedral of Christ the Saviour where His Holiness Patriarch Kirill of Moscow and All Russia will celebrate the evening service.