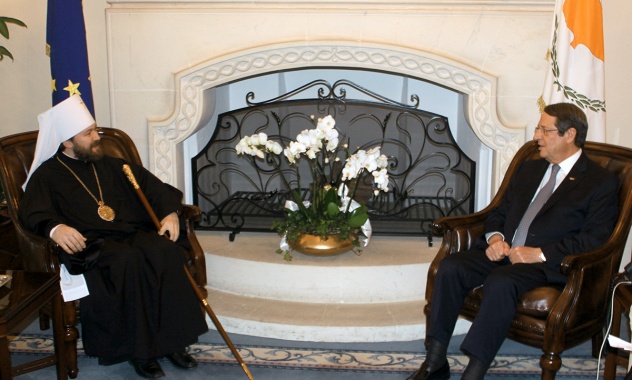 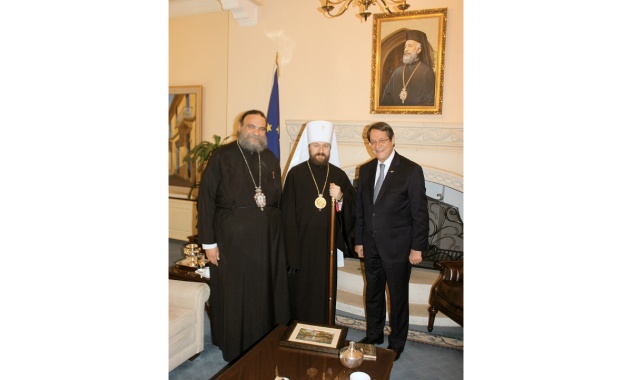 On March 27, 2017, Metropolitan Hilarion of Volokolamsk, head of the Moscow Patriarchate department for external church relations (DECR), met with President Nicos Anastasiadis of the Republic of Cyprus at his residence in Nicosia. Welcoming his guest, Mr. Anastasiadis said that the relations between Russia and Cyprus were not reduced to good relations between politicians but go much deeper thanks to the ages-long bonds of friendship between the peoples of Russia and Cyprus and the Churches. He described the opening of a Russian church at the Metropolis of Tamassos as a moving event and great joy for all the Cypriots.

On his part, Metropolitan Hilarion expressed the conviction that the new church would become a spiritual home for many Russian-speaking people on the island and that the example of the Metropolis of Tamassos would be followed by other dioceses of the Orthodox Church of Cyprus.

They also discussed the continued division of the island and shared their opinions on prospects of the negotiation process for settling this problem. The DECR chairman expressed hope that ultimately a just decision will be found to make it possible for the people of Cyprus to preserve the land of their fathers and their identity. President Anastasiadis stressed that one of the priorities for him as head of the state of Cyprus is to preserve the Christian presence on the island and throughout the Middle East region, pointing with gratitude to the active stand taken by Russia and the Russian Orthodox Church on this problem.