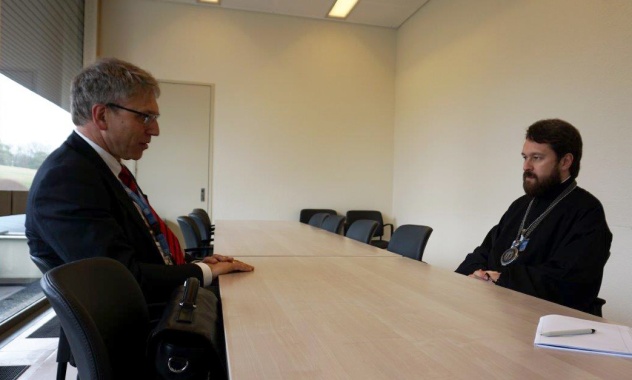 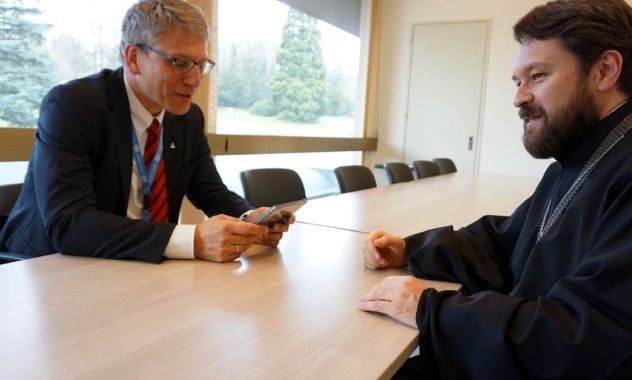 On 7 March 2017, Metropolitan Hilarion of Volokolamsk, chairman of the Moscow Patriarchate’s Department for External Church Relations, met with Rev.Dr. Olaf Fykse Tveit, General Secretary of the World Council of Churches. Attending the talk, which took place at the United Nations Office at Geneva, was archpriest Mikhail Gundayev, representative of the Russian Orthodox Church to the World Council of Churches and international institutions.

The participants in the meeting noted the importance of initiatives like a high-level international conference entitled “Mutual Respect and Peaceful Coexistence as a Condition of Interreligious Peace and Stability: Supporting Christians and Other Communities” in which they took part. Certain problems pertaining to the protection of Christians in the Middle East were discussed.

General Secretary of the World Council of Churches told Metropolitan Hilarion about his visit to Iraq to show solidarity with the churches in the country and analyze the situation of Christians. Rev. Dr. Tveit underscored that official representatives of the Iraqi government considered the Christian presence an important factor needed for building a truly pluralistic society in the country and invited the Moscow Patriarchate to take part in the WCC future programmes on Iraq.

The participants also discussed the situation of the Orthodox Church in Ukraine. Rev. Dr. Tveit emphasized the importance of attending the session of the WCC Central Committee in Trondheim, Norway, last June, by the two representatives of the Ukrainian Orthodox Church of the Moscow Patriarchate. The WCC’s willingness to cooperate with the canonical Churches in Ukraine aimed at the establishment of peace was confirmed.