Patriarch Kirill meets with delegation of Patriarchate of Antioch 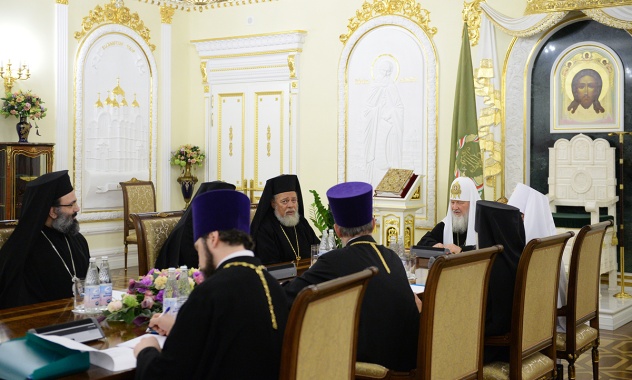 On November 21, 2016, His Holiness Patriarch Kirill of Moscow and All Russia met with a delegation representing the Patriarchate of Antioch at the celebrations devoted to the Primate of the Russian Orthodox Church’s 70th birthday.

Participating in the meeting from the Russian Orthodox side were Metropolitan Hilarion of Volokolamsk, head of the Department for External Church Relations (DECR), Bishop Panteleinon of Orekhovo-Zuevo, head of the Synodal Department for Church Charity and Social Service; Archpriest Nikolay Balashov, DECR vice-chairman, and Archpriest Igor Yakimchuk, DECR secretary for inter-Orthodox relations.

Welcoming the delegation, His Holiness said in particular, ‘I am very glad that as envoys of His Beatitude Patriarch John you have come to Moscow to take part in my birthday celebrations. We regret that His Beatitude the Patriarch was unable to come but take it with understanding. Your presence here is very important’.

His Holiness also expressed the conviction that despite the difficulties existing in the life of universal Orthodoxy, by God’s power and with the active participation of Churches they can be overcome. The unity of Orthodox Churches and their cooperation in resolving problems facing the world, the Church and the individual today require joint efforts.

He expressed solidarity and compassion with the suffering peoples of Syria, Iraq and the countries in which blood is spilt today, civilians die at the hands of terrorists and Christians are killed or driven away from their historical homes. ‘Addressing the hierarchs today, I mentioned this tragedy. The Christian world has experienced never before what it is experiencing now’, His Holiness stressed, ‘As to the number of killed Christians, the persecution of Christians in Russia was more cruel and its scale was larger, but if we look at this not in absolute but relative proportions what is happening in the Middle East can be called genocide against the Christian population. At the same time, the elimination and expulsion of Christians destroys all the balances, thus changing the nature of nations and peoples in the Middle East’.

Patriarch Kirill recalled that as far back as the very beginning of the conflict in Syria, he considered it necessary to visit the Orthodox Church of Antioch. That official visit took place in 2011, under the late Patriarch Ignatios. ‘I visited Syria; I saw the ardent faith of your people. Though the hostilities had already begun, there already were terrorist actions, but Damascus stayed impact and would probably stay as such in my memory for good. It was a prosperous Middle Eastern city. I came there for the first time in 1971 and remember what Damascus looked like at that time and what it remained until recently’. He said that the tragic events happening there cause pain to all who understand their possible consequences.

‘That’s why I would like to express my profound condolences in your persons to all those who are suffering in Syria and Iraq’, he continued, ‘Please convey my condolences to His Beatitude Patriarch John and I would like to assure you that the Russian Orthodox Church will continue to do all that depends on it to help suffering people, to work for putting an end to the hostilities as soon as possible and to help establish a lasting peace with justice’.

Having thanked His Holiness for the warm hospitality, the delegation conveyed him a message of fraternal love from His Beatitude Patriarch John of Antioch and his wishes of long life in Patriarch Kirill’s service of the holy Russian Church and the Russian people who bear the faith in their hearts.

‘As Your Holiness has said, the Russian people endured hard times but in that period many saints shone forth in Russia, and this enkindled the flame of faith in the heart of the Russian people. We very much wish that the feelings and sufferings we are experiencing there could pass through the intercession of Your Holiness and bishops of the Russian Church. We remember: after suffering always comes sanctity. We rely on the good and strong relations binding our two Patriarchates, on the love of the Russian Church for our people in Syria, Iraq and Lebanon’, Metropolitan Ignatios said.

The situation with regard to Metropolitan Paul of Aleppo who was kidnapped near Aleppo in April 2013 together with Metropolitan Mar Gregory John Abraham from the Syriac Orthodox Church remains an unceasing pain for the faithful of the Patriarchate of Antioch. As the participants in the talk noted, the fate of these Christian hierarch remains unknown to this day.

The delegation wished His Holiness long years of life in the service of the Russian Orthodox Church, stressing, ‘You have become a great support for Orthodoxy. Thank you’.

Patriarch Kirill, on his part, informed the delegation that the Russian Orthodox Church raised funds for people suffering from terrorism in the Middle East. Thus, fine tons of medicines and some medical equipment have been supplied recently to the Al-Hosn Patriarchal Hospital. ‘I should say that the people respond to requests and make donations when it concerns those who suffer in the Middle East’, His Holiness stated. He also noted that the first question he raised at his meeting with Pope Francis of Rome was that of the oppression of Christians in the Middle East.

As a gift from Patriarch John of Antioch, Patriarch Kirill received an epigonation, a church vestment.

His Holiness Kirill handed over to the delegation a gift for Patriarch John – a vestment made especially for him, a crozier and a copy of his Collected Works. He presented Metropolitan Philip, Metropolitan Ignatios and Metropolitan Silouan with bishop’s croziers.