Metropolitan Hilarion of Volokolamsk meets with Pope Francis of Rome 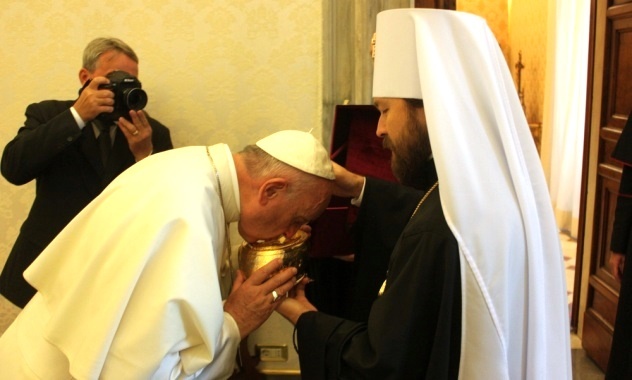 On September 15, 2016, Metropolitan Hilarion of Volokolamsk, head of the Moscow Patriarchate’s department for external church relations (DECR) met with Pope Francis of Rome at the Apostolic Palace in the Vatican.

Metropolitan Hilarion has arrived in Italy with the blessing of His Holiness Patriarch Kirill of Moscow and All Russia and in keeping with the Holy Synod decision as head of the Russian Orthodox Church delegation to the 14th plenary session of the Joint Commission for Theological Dialogue between the Orthodox Church and the Roman Catholic Church. The session will be held from September 15 to 22 in Chieti.

The DECR chairman conveyed to the head of the Roman Catholic Church a gift from His Holiness Patriarch Kirill – a part of the relics of St. Seraphim of Sarov in a shrine made in the form of an Easter egg. The Pope of Rome was deeply moved by the precious gift and asked to convey to His Holiness the Patriarch his cordial gratitude and fraternal greeting.

In the course of the meeting, the sides discussed the state of the Orthodox-Catholic relations following the historic meeting between the two heads of the Churches in February 2016 in Havana. Among the focuses of the talk was the tragic situation of the Christian population of the Middle East. Pope Francis and Metropolitan Hilarion pointed to the positive experience of cooperation in giving aid to Christians in the Middle East in pursuance of the decision made at the meeting in Cuba. The both sides stressed the need for further consolidated actions in the Middle East. The DECR chairman introduced the Pope to the Russian Church’s initiatives for bringing humanitarian aid to suffering people in Syria and thanked the Pontiff for his peacemaking efforts.

The sides noted the fruitful cooperation between the Russian Orthodox Church and the Roman Catholic Church in the field of culture – the area in which the Joint Working Group set up for the purpose is engaged. Thus, in the last year a project for exchanging academic trips by priests and theological students from the Roman Catholic Church and the Moscow Patriarchate to Moscow and Rome respectively has proved to hold much promise as an opportunity for a deeper introduction to the traditions and today’s life of the two Churches.

After the talk, which was held in an atmosphere of mutual understanding, the sides exchanged tokens of the meeting.

Present at the meeting were Rev. Hyacinthe Destivelle of the Pontifical Council for Promoting Christians Unity, and Rev. Alexis Dikarev, Department for External Church Relations.