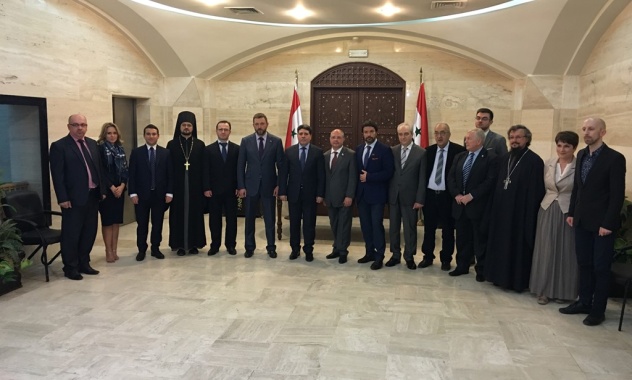 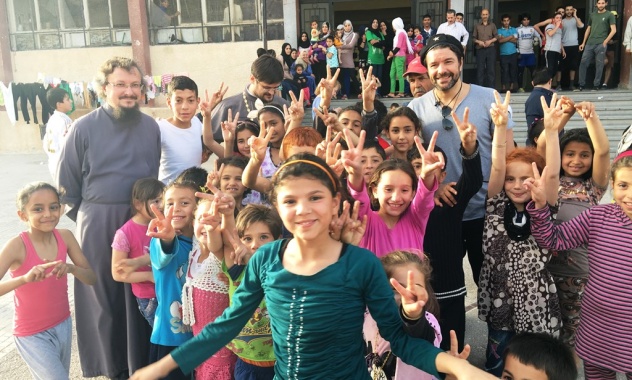 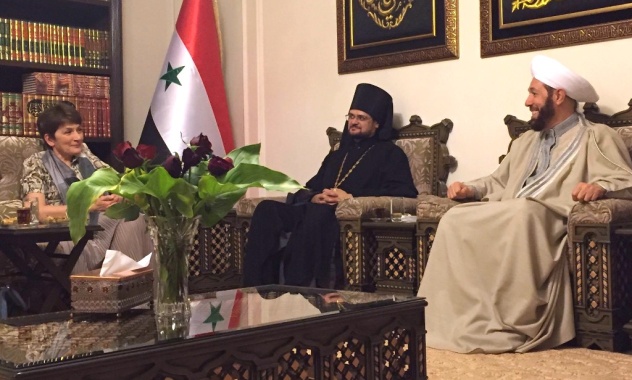 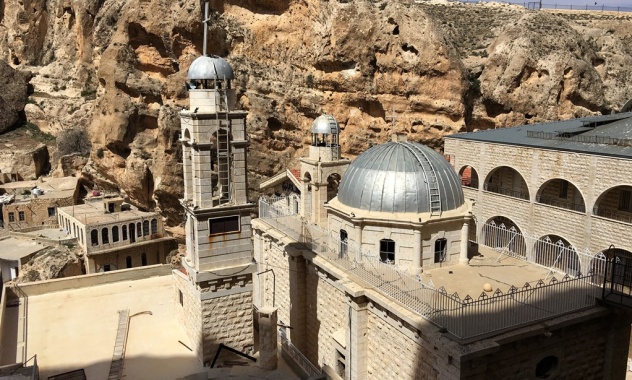 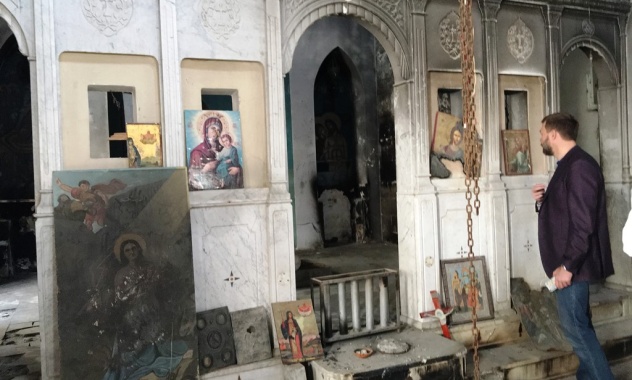 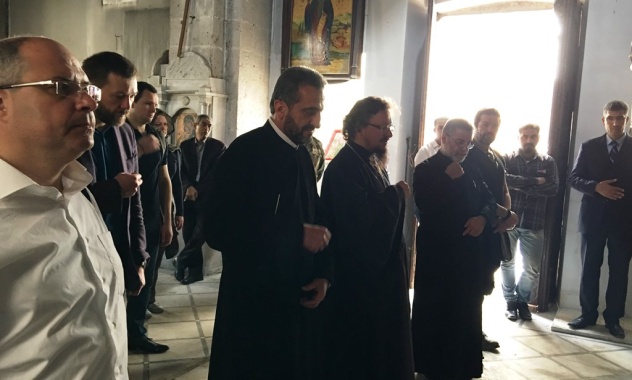 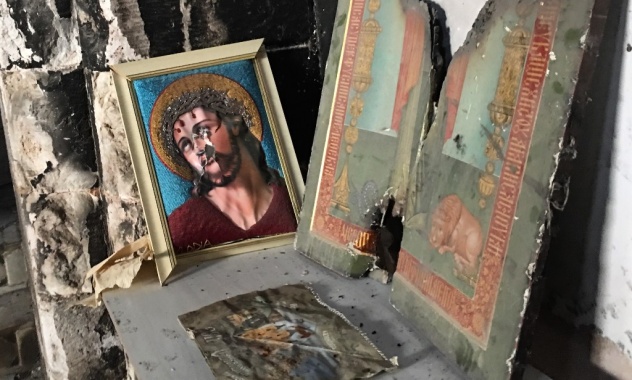 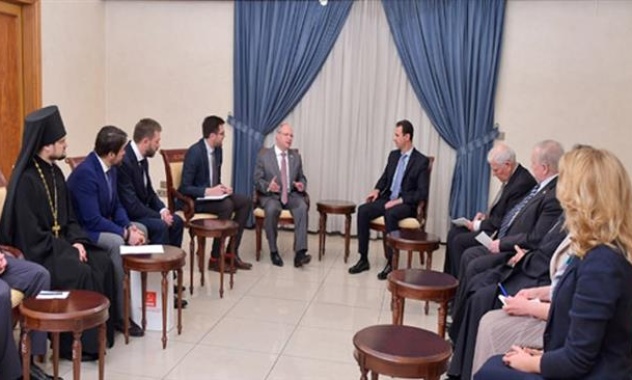 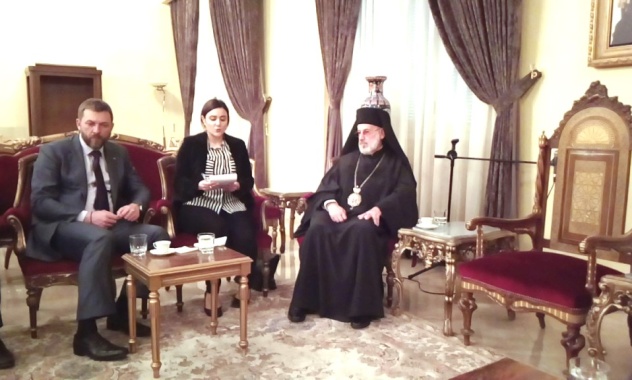 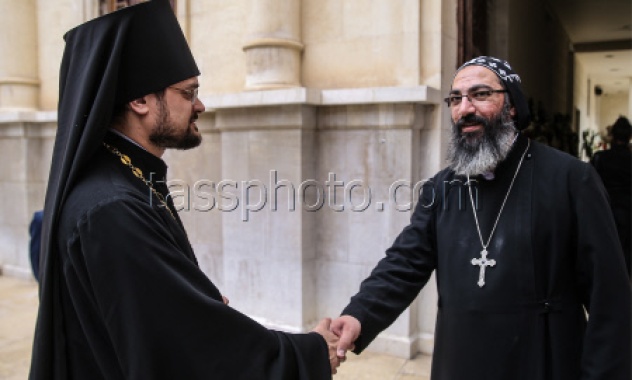 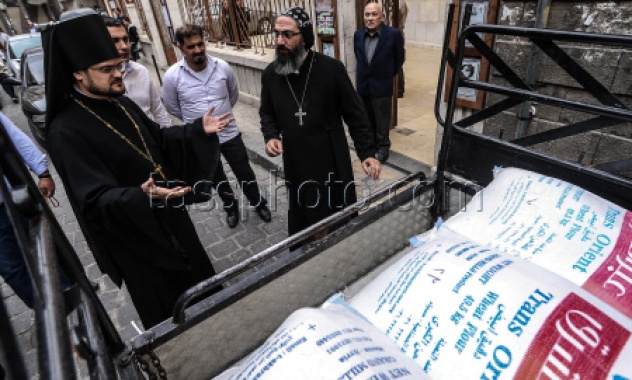 A delegation of Russian parliamentarians, members of the inter-factional group for defending Christian values, was on a visit to Syria from April 9 to 12, 2016. It included S. Gavrilov (State Duma), A. Yuschenko (Council of the Federation and State Duma), D. Sablin (Council of the Federation), and Ms. N. Kuskova and Ms. Ye. Averkova, members of the Committee for Solidarity with the Peoples of Syria and Iraq. With the blessing of Metropolitan Hilarion, head of the Moscow Patriarchate department for external church relations (DECR), the delegation was joined by Hegumen Arseny (Sokolov), representative of the Patriarch of Moscow and All Russia to the Patriarch of Antioch and All the East, and Hieromonk Stephan (Igumnov), DECR secretary for inter-Christian relations.

The delegation’s visit began with a prayer during the Divine Liturgy in the church of St. Ignatius the God-Bearer at the Moscow Patriarchate Damascus representation. It was celebrated on April 10 by Father Arseny (Sokolov). Among the worshippers were representatives of the Russian-speaking community in Damascus. The service was held in that church for the first time after a long interruption.

Later that day, the delegation met with the Speaker of the Syrian Parliament M. J. Al-Laham and the Syrian Prime Minister W. Al-Halqi. There was a constructive exchange of opinions concerning the current situation in Syria and prospects for a settlement of the Syrian crisis. In the light of the forthcoming parliamentary election to take place on April 13, they discussed various aspects of the development of parliamentarism in the country. The leaders of the Syrian state gave a high value to the peacemaking work of the Russian Orthodox Church. Addressing Mr. W. Al-Halqi, Father Arseny noted that Syria is a Biblical land held equally dear by all those who consider themselves to be descendants of Abraham. As far back as the 9th century BC, God sent the Prophet Elisha to anoint Azaliah as king of Syria, while in the 1st century AD, St. Paul, Apostle of Gentiles, embraced the holy baptism in Damascus.

On April 11, the delegation visited Maaloula, an old Christian city near Damascus. They were shocked to see a terrible picture of ruins to which terrorists reduced Maaloula’ holy places and shrines. Father Arseny said a prayer at the Orthodox convent of the Protomartyr Thecla. The delegation prayed for a speedy rebirth of the old monastery.

On April 12, the delegation was received by President Bashar Assad, who stressed, in particular, that the future of the Middle East and Syria as its part was unthinkable without the Christian presence. He also noted the considerable peacemaking and humanitarian role the Russian Orthodox Church played in settling the Mideast crisis and giving support to the Syrian Christians and bringing humanitarian aid to all the Syrian people.

Addressing President Assad, Father Stephan recalled that from the very beginning of the crisis the Russian Church and personally His Holiness Patriarch Kirill of Moscow and All Russia raised their voices in support of the Christians and all the suffering Syrian people and contributed to the humanitarian projects aimed to relieve their suffering. Speaking about the future rebirth of Syria, he stressed that it was important to remember that the restoration of destroyed shrines in Syria, churches, monasteries and mosques, should be the key elements in this endeavor as traditional centers of not only religious but also social life of the Syrian people.

On April 11, the delegation visited the Orthodox Patriarchate of Antioch in Damascus, where they were received by Bishop Lukas of Seidna, vicar of His Beatitude Patriarch of Antioch and All the East. The guests visited the Church of Antioch’s Cathedral of the Assumption, in which Fathers Arseny and Stephan, after vespers, held a requiem service for Archimandrite Petr (Afanasyev), father superior of the Monastery of the Holy Mandylion in Moscow, who passed away on that day. The delegation also visited the Armenian diocese in Damascus and met with the Grand Mufti of Syria Ahmad Badr Al-Din Hassoun.

During their stay in Syria, the delegation visited the camp for displaced people in ash-Sham suburb of Damascus and the boarding school for children whose parents were killed defending their homeland from terrorists.