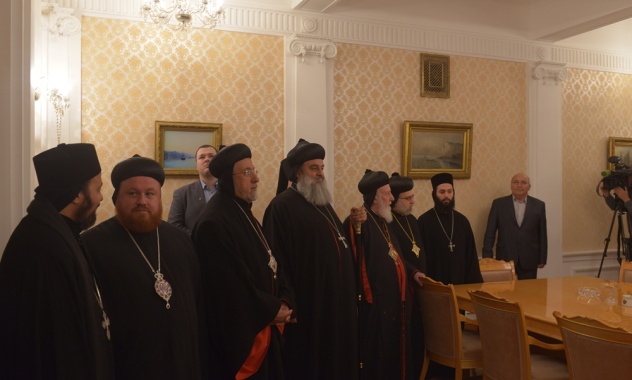 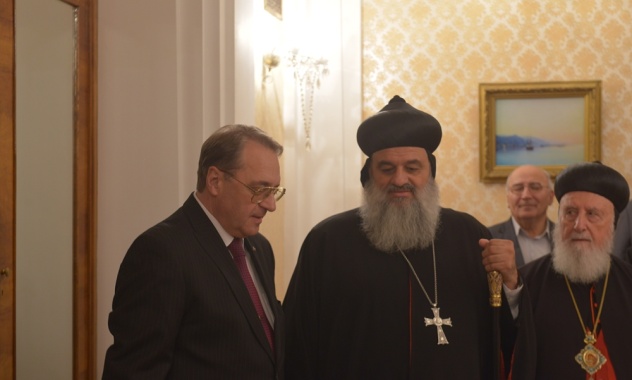 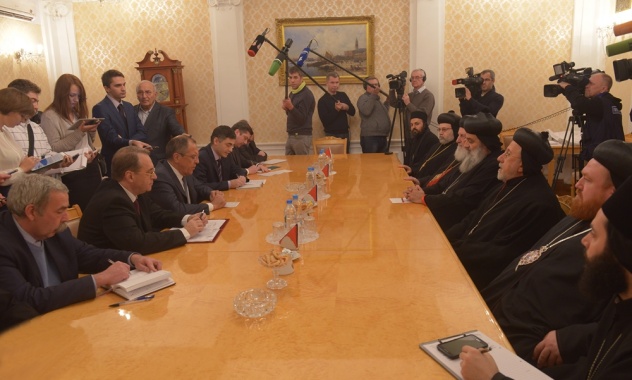 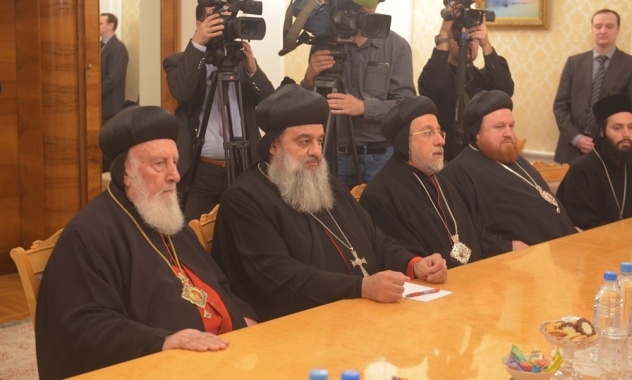 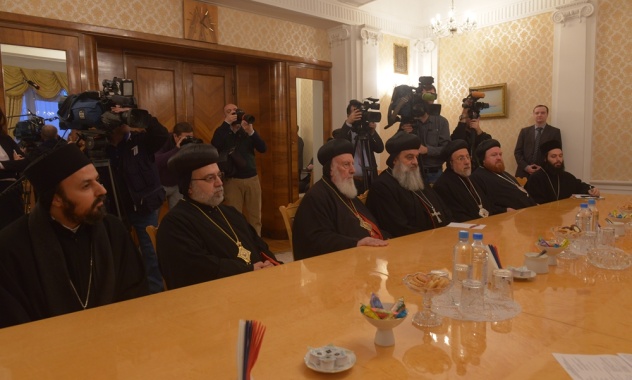 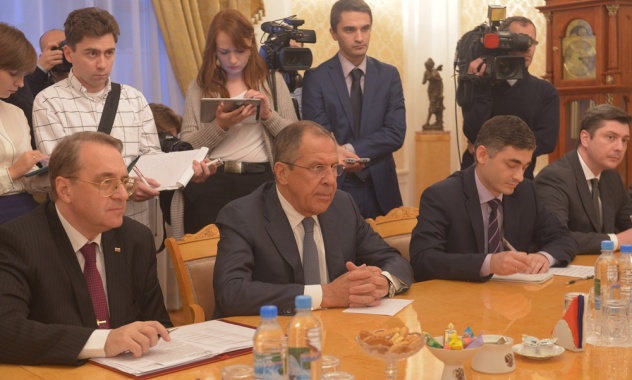 In attendance were also M. Bogdanov, deputy minister of foreign affairs, a number of other staff members of the ministry, Hieromonk Stephan (Igumnov), DECR secretary for inter-Christian relations, and S. Alferov, a staff member of the DECR.

As Mr. Lavrov pointed out, the Russian Federation Ministry of Foreign Affairs attached a great importance to close contacts with representatives of various confessions in the Middle East, considering the need to do everything possible to prevent an interreligious and inter-civilizational division in the region.

“The situation in the region is deeply disturbing. Great distress is experienced by our dear Syria, but no less complex problems are evident in Libya, Iraq, Yemen and other parts of the Middle East region, in which serious threats are arising to show that terrorists may reinforce their positions. The cruelty and brutality of militants of ISIS, Jabhat an-Nusra and other terror groupings victimise people of all confessions, all ethnic groups, and we certainly care for and are not indifferent about the fate of Christians in the Middle East”, the minister said.

Stating that the Middle East is the cradle of Christianity, Mr. Lavrov said, ‘Christians have lived there for over two millennia, and it is necessary to do all that is possible to preserve intact the civilizational fabric of this region’. He also recalled that the Russian Federation was one of the initiators of holding a special meeting on the persecution against Christians on the sidelines of the Human Rights Council meeting in Geneva in March 2015. ‘We will actively promote and advocate this policy, this initiative, in international organizations’, he assured his guests.

Mr. Lavrov also said that ‘to raise the effectiveness of the struggle with terrorism while launching efforts in a search for a political settlement in Syria, Libya, Yemen and other countries of the region is a common task for all people in the region, for the whole world community’.

Patriarch Ignatius Aphrem II, on his part, expressed sincere gratitude to the Russian State and the Russian Orthodox Church for help to the Syrian suffering population, as well as hope for Russia’s continued actions aiming to struggle with international terrorism, from which civilians in a number of the Middle East country, both Christians and Muslim, and people of other religious traditions are suffering today. ‘Today we associate our future with the actions undertaken by Russia in her Middle East policy. We are very glad that we have such good and strong friends’, His Holiness said.

‘The Syrian people are confident that Russia can help them not only to cleanse their native land of terrorists, but also to create conditions for full-fledged national dialogue aimed to form a future system of the country, in which representatives of all the ethnoses and confessions must be involved’, the patriarch stressed.

Addressing Mr. Lavrov, Metropolitan Mor Severius Hawa of Baghdad and Basra, who has served in Iraq for several decades now, said that his country endured many hardships in the modern history – wars, a blockade, internal disorders, but what is happening in Iraq today is a real tragedy for its people. Especially disastrous it is for ethnic-confessional minorities – Christians and the Ezides. For the last decades alone, the size of the Syriac Orthodox community in Iraq has decreased almost ten times. He noted that some countries of the west made repeated promises to protect the Iraqi civilian population, to stop the process of destruction of religious and historical monuments in the country and to create conditions for those who had been driven out of their homes to return to them. But none of these promises has been kept.

His Holiness Patriarch Mor Ignatius Aphrem II also addressed the Russian minister of foreign affairs, asking for assistance in clarifying the fate of the two Christian hierarchs, Metropolitan Mar Gregory John Ibrahim (Syriac Orthodox Church) and Metropolitan Paul (Orthodox Church of Antioch) who were kidnapped two and a half years ago. He also expressed gratitude for the efforts which had already been made to this end.

The head of the Syriac Orthodox Church also told Mr. Lavrov about the meeting he had the day before with His Holiness Patriarch Kirill of Moscow and All Russia. The sides stressed the considerable peacemaking role of the Russian Orthodox Church and personally her Primate in the process of settlement in the Middle East and gave a high value to its humanitarian initiatives.