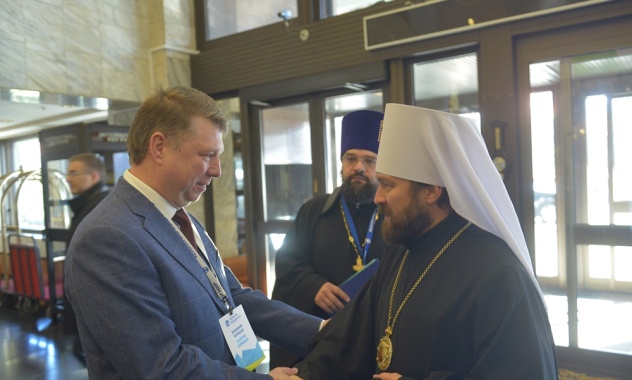 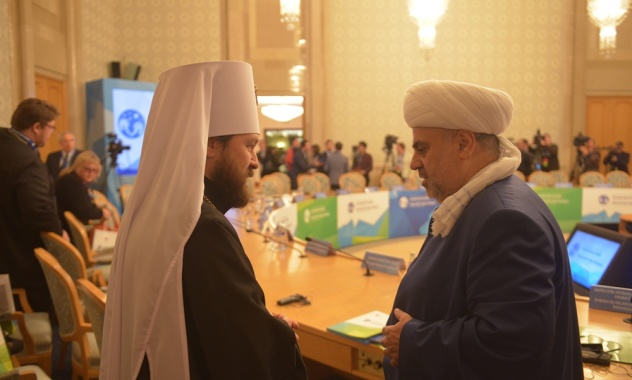 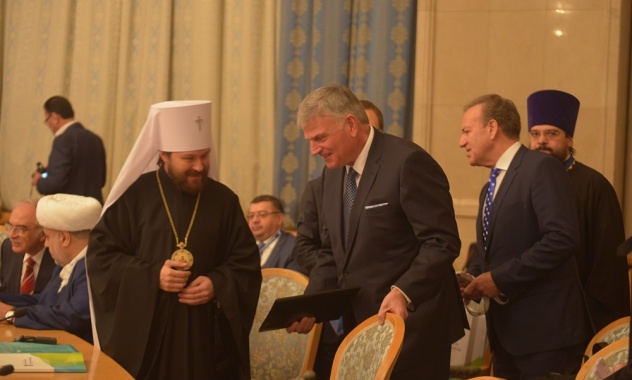 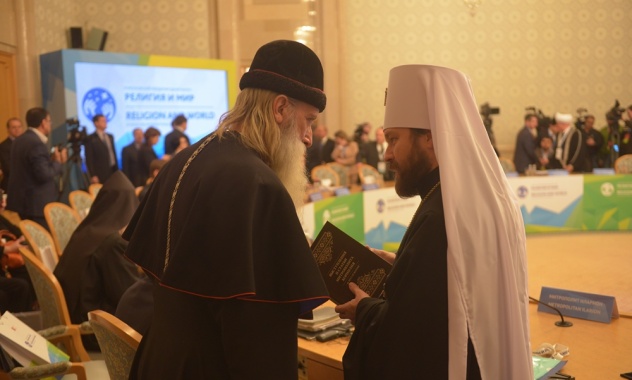 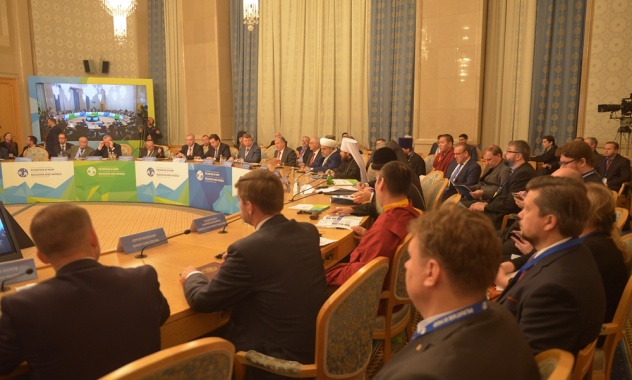 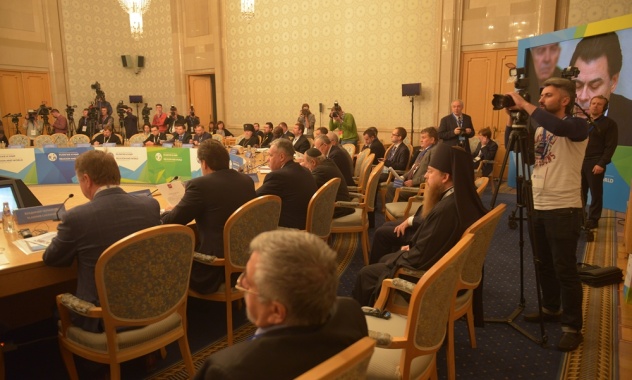 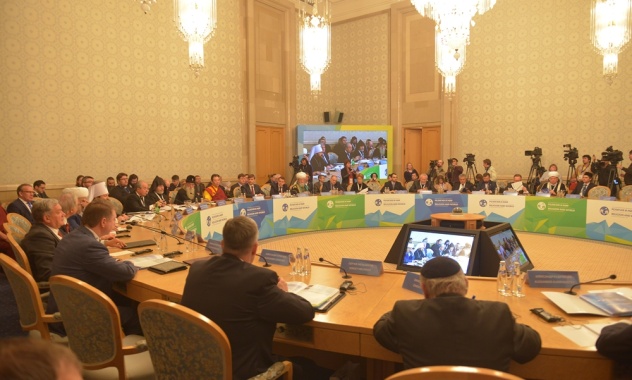 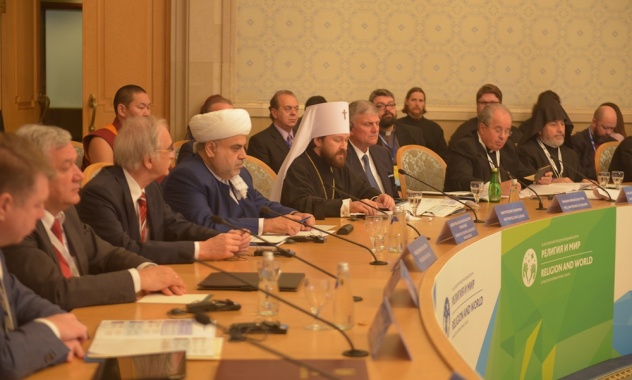 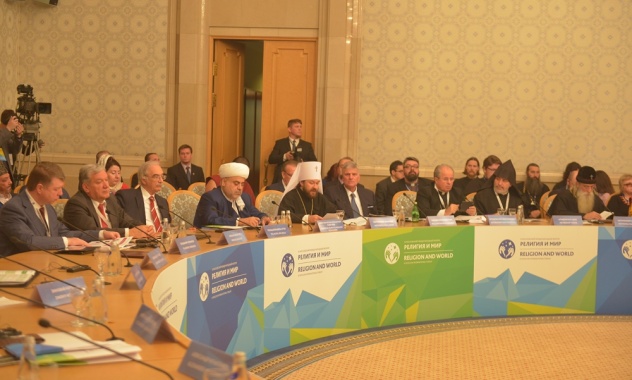 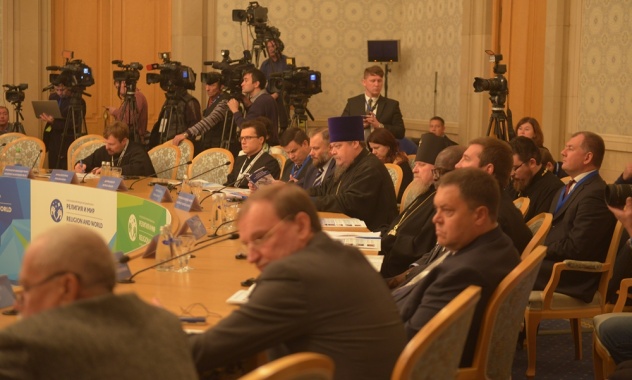 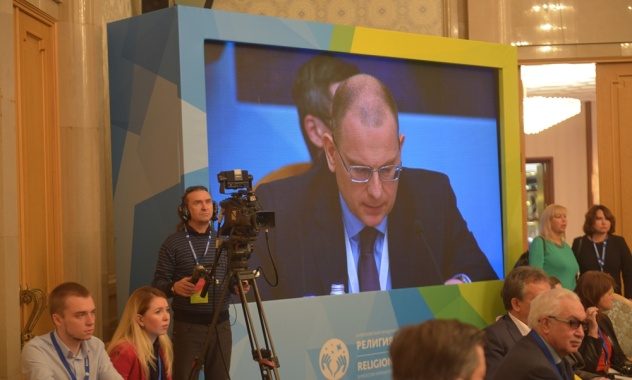 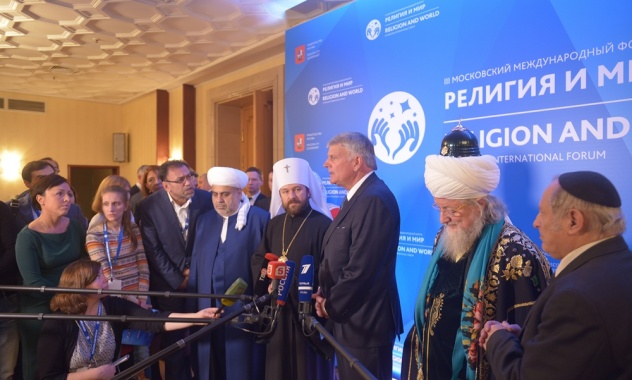 On October 26, 2015, the 3d Moscow International forum ‘Religion and Peace’ took place under the theme ‘The Role of Religion in the Modern World’. It was organized by the Moscow Government and the Presidential Council for Cooperation with Religious Organizations.

The chairman of the Moscow Patriarchate department for external church relations (DECR), Metropolitan Hilarion of Volokolamsk, opened the plenary part of the forum as its moderator. In his introductory remarks, he pointed to the special relevance of the forum’s theme since ‘without the peacemaking potential of traditional religions it is impossible to resolve any of the existing conflicts’.

‘It is difficult to overestimate the role of religion in the processes of the globalization, development of extremism and terrorism under religious slogans, and in the moral state of the human society. Russia has a rich age-old experience of building relationships between various ethnoses, religions and cultures. We keep addressing this experience today too’, he said.

His Eminence reminded the participants that there have never been interreligious wars or serious inter-confessional conflicts in the history of the multinational Russian state. ‘In our country, there has been no desire on the part of some peoples to absorb others or to unify cultures and traditions. On the contrary, conditions have been created for various ethnoses to preserve their faith, their language and customs’, the hierarch said.

‘For us, the priority aim of interreligious and inter-confessional cooperation is to promote peace and accord among peoples. The Lord Jesus Christ Himself has given us the commandment to do the tasks of peace (cf. 5:9). Concerning the faithful of other religions, we are guided by the behest of St. Paul who said: If it is possible, as far as it depends on you, live at peace with everyone (Rom. 12:18).

Metropolitan Hilarion recalled the words of His Holiness Patriarch Kirill, who in his address to the Bishops’ Council of the Russian Orthodox Church in 2013, outlined the primary tasks of interreligious dialogue today: ‘Our contacts with people of other religions are one of the ways of witness to Christ before the world. The aim of interreligious dialogue is a search for an answer to the challenges of today in seeking to ensure a peaceful life and cooperation between people of different religions, ethnic backgrounds and cultures’.

His Eminence expressed the conviction that the common moral foundations of traditional religions give an opportunity for meeting together such challenges of today as extremism, aggressive secularism and moral relativism and for protecting the traditional notions of marriage and family and for advocating fundamental human rights.

In conclusion of his remarks, the DECR chairman, speaking on behalf of His Holiness Patriarch Kirill, wished successful work to the Religion and Peace forum.

Mr. M. Belousov, deputy head of the Presidential Domestic Policy Directorate, read out a message of greeting from the Head of the Russian State. Mr. Putin stated in particular, ‘Today, representatives of the traditional religions take an active part in the life of the country, developing a broad educational and charitable work, and give tireless attention to the education of the younger generation, fostering the religious and moral traditions and doing much for the maintenance of peace and accord in society. The deepest credit is deserved by the consistent efforts of religious organizations to oppose any manifestation of religious extremism’.

A message of greetings from Moscow Mayor S. Sobyanin was brought by Deputy Mayor A. Gorbenko.

The plenary session, chaired by the DECR chairman Metropolitan Hilarion and Mr. B. Chernikov, head of the Moscow department for national policy, inter-regional relations and tourism, heard a report by the DECR chairman on ‘Peacemaking work of the Russian Orthodox Church: Interreligious and Inter-confessional Aspects’.

Among the speakers were also Sheikh-ul-Islam Allahshuqur Pasha-zade, co-chairman of the CIS Interreligious Council and chairman of the Caucasus Muslim Board, the Rev. William Franklin Graham, president of the Billy Graham Evangelistic Association, Mr. A. Glotser, representative of the Federation of the Jewish Communities in Russia, and Mr. K. Dolgov, Foreign Ministry commissioner for human rights, democracy and rule of law.

The forum continued its work in experts’ sections on ‘The Middle East: ways towards an interreligious peace’, ‘International discussion in defence of traditional religious and moral values’ and ‘Religious charities in Russia and the world’.
Among the speakers at the section on the Middle East was the Rev. Dimitry Safonov, head of the DECR section for interreligious contacts, who made a report on the cooperation between religious organizations, public institutions and states in the efforts to protect the persecuted Christians in the Middle East. He informed the forum about the work carried out by the Russian Orthodox Church for protecting Christians in the Middle East and North Africa and attracting to this problem the attention of the international community. He enumerated several international forums attended by the DECR chairman and his staff and the statements made by Metropolitan Hilarion and Patriarch Kirill on this problems. He described the ways in which the Church worked with non-Orthodox Christians and Muslim leaders and communities to give support to the victims of extremism.

After the plenary session, a brief press conference took place, at which Metropolitan Hilarion pointed to the need for cooperation between various religious communities in today’s world. Among the challenges to be met together by people of religious confessions are the Christian genocide in the Middle East, persecution against other religious minorities and terrorism with the use of religious slogans.

‘We have gathered together today to discuss these problems and to outline ways of their solution. It is important that the world community should pay attention to them and call upon political leaders to solve the existing problems’, the archpastor stressed. The situation concerning the persecution of Christians in the Middle East, he said, needs a serious attention. ‘It is impossible to manage the situation by declarations and statements alone. What is needed here are political mechanisms. It is necessary to create a broad coalition against terrorism that can make a real contribution to the elimination of this threat’.

Among the participants in the forum were Archbishop Alexander of Baku and Azerbaijan, the Apostolic Nuncio to Russia Archbishop Ivan Jurkovic, Archbishop Ezras Nersesian, head of the Novokhichevan diocese of the Armenian Apostolic Church, Metropolitan Cornily of Moscow and All Russia of the Orthodox Old-Belief Church, Archpriest Vsevolod Chaplin, head of the synodal department for church-society relations, Archimandrite Seraphim (Shemyatovsky), representative of the Orthodox Church of the Czech Lands and Slovakia to the Patriarch of Moscow and All Russia, as well as Supreme Mufti Talgat Tadjuddin, chairman of the Central Muslim Board in Russia, Mufti Albir Krganov, chairman of the Moscow Muslim Board, the Rev. S. Ryakhovsky, chairman of the Russian Union of Evangelical Faith Christians, Mr. Ya. Nilov, chairman of the State Duma committee for public associations and religious organizations, and Mr. Ye. Yeremin, head of the department for cooperation with religions organizations under the Presidential Domestic Policy Directorate.