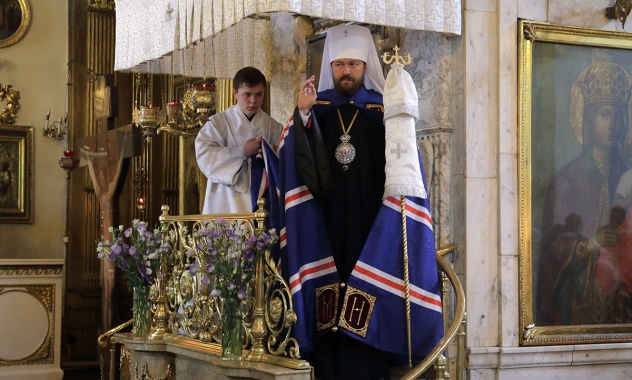 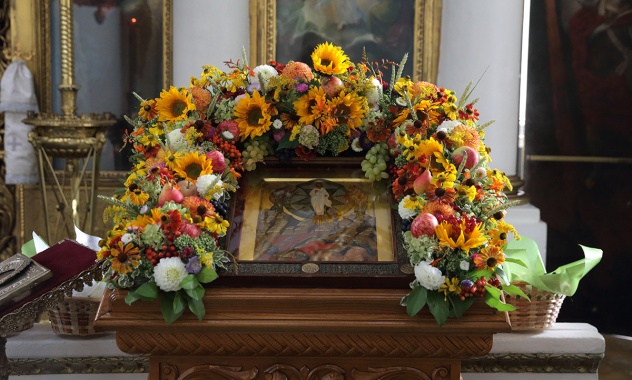 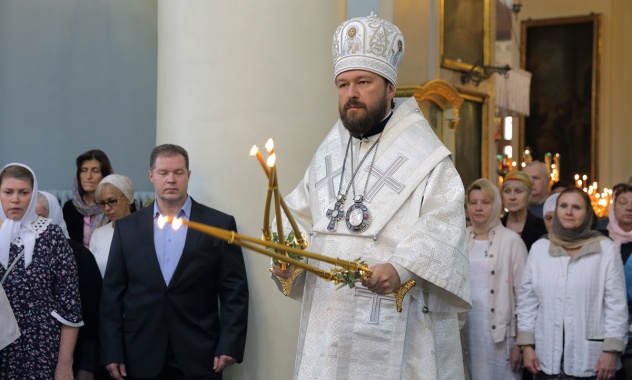 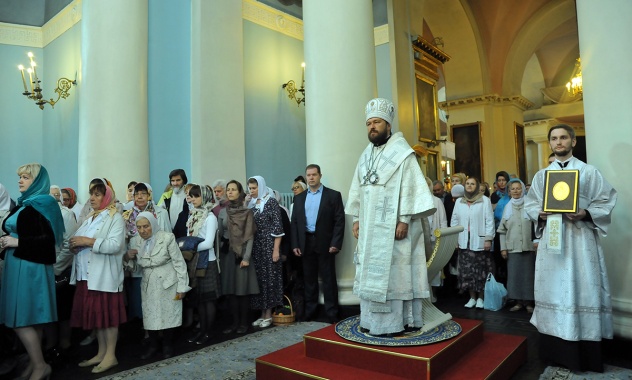 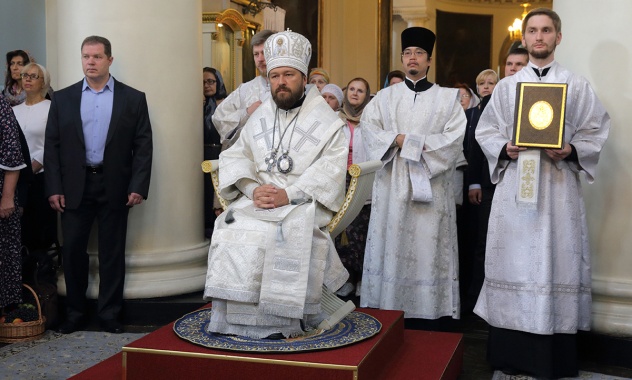 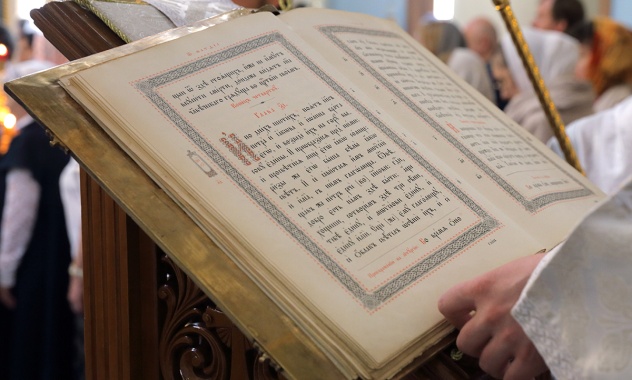 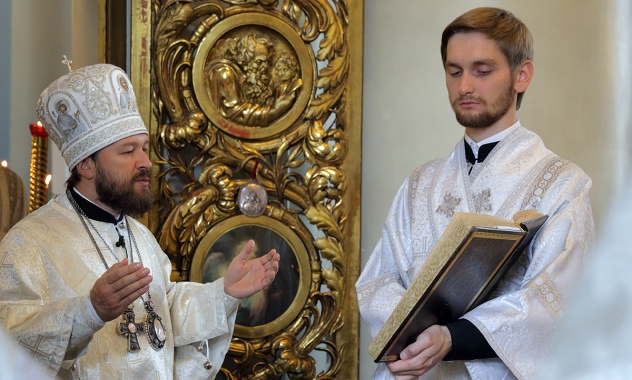 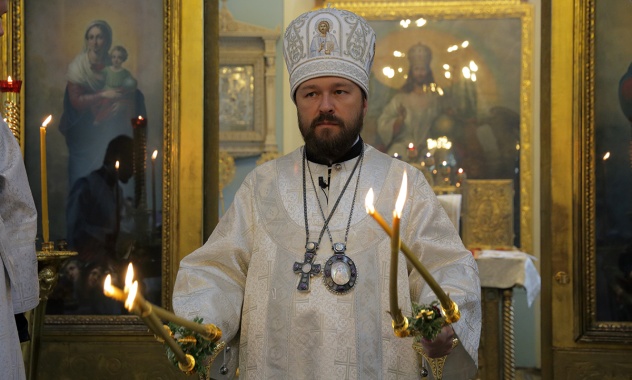 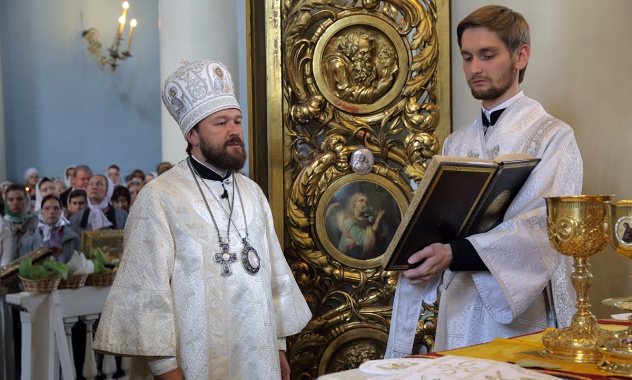 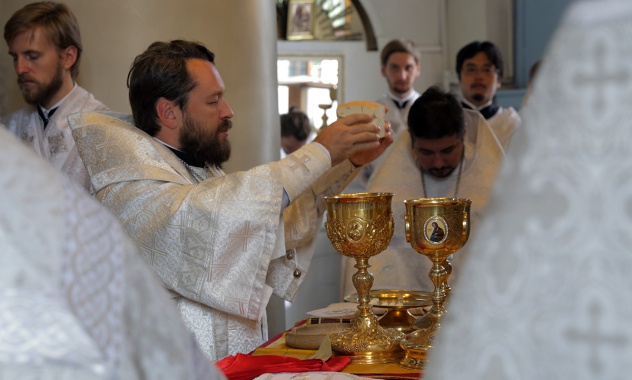 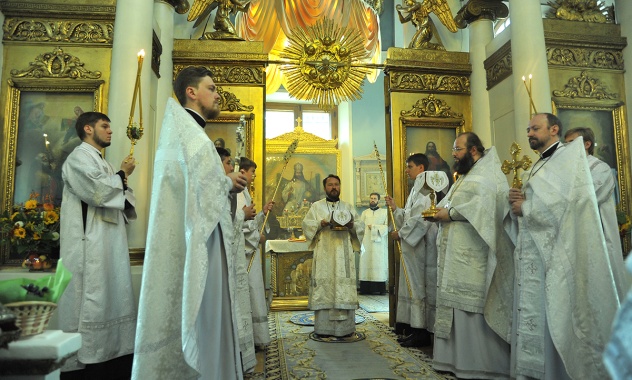 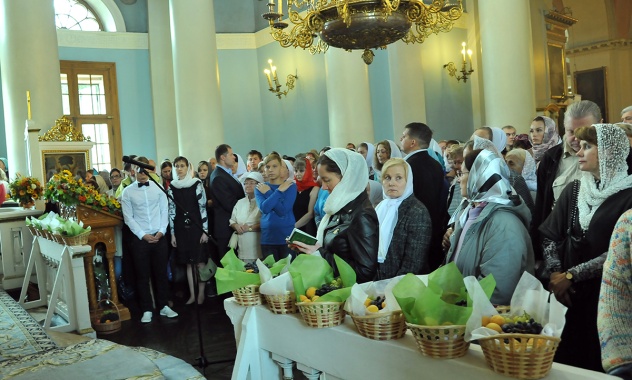 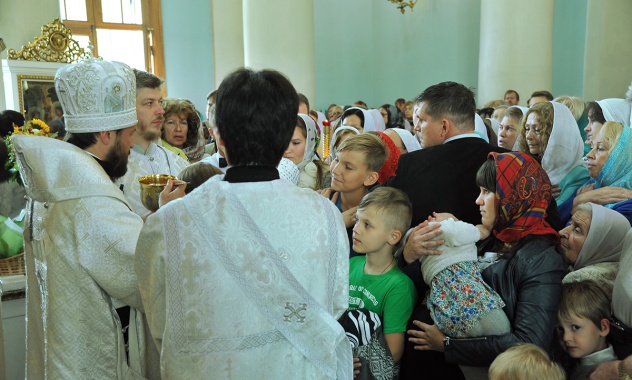 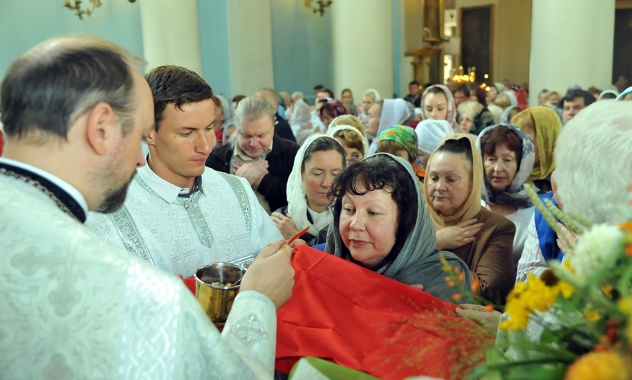 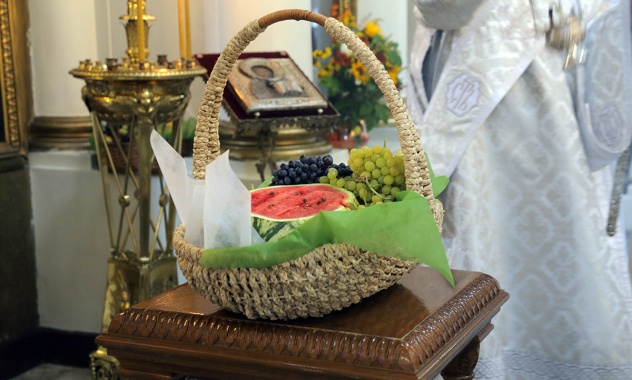 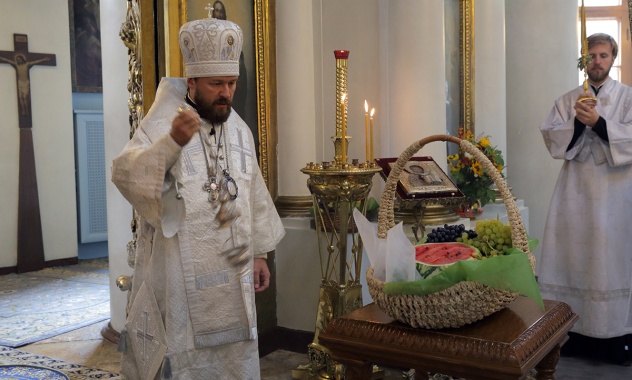 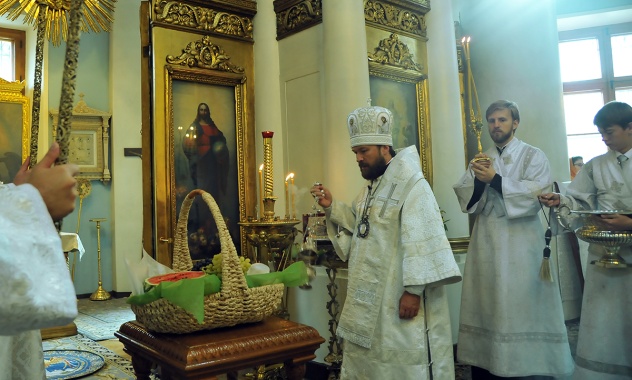 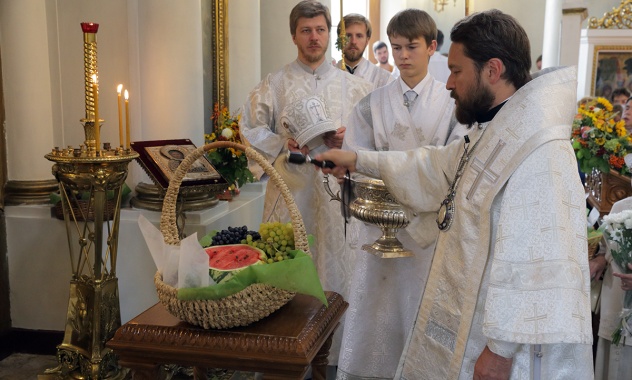 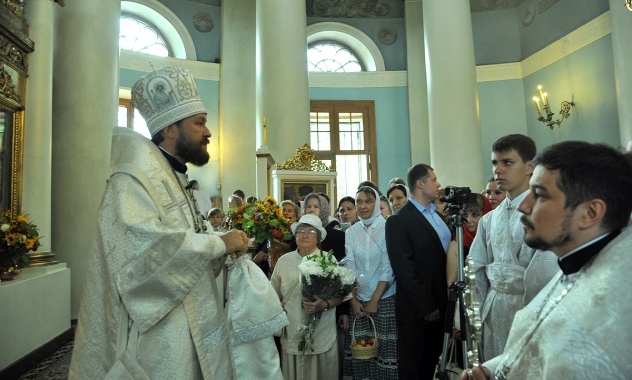 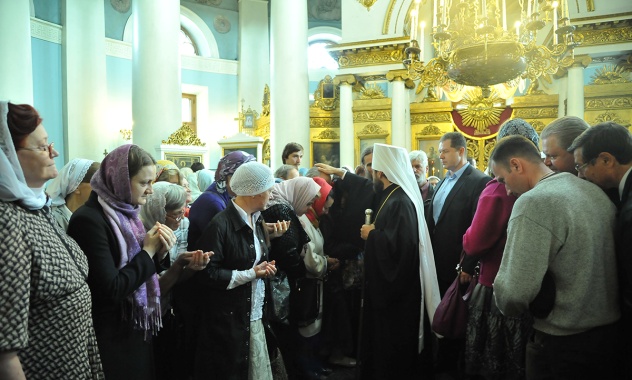 On 19 August 2015, the Feast of the Transfiguration of the Lord, Metropolitan Hilarion of Volokolmask, chairman of the Department for External Church Relations of the Moscow Patriarchate, celebrated the Divine Liturgy at the Church of the “Joy to All the Afflicted” Icon of the Mother of God in Bolshaya Ordynka Street in Moscow. Concelebrating with the archpastor were clerics of the church.

At the end of the service, Metropolitan Hilarion performed a rite of blessing the fruits.

After the Liturgy, he delivered a homily, saying in particular:

“Dear fathers, brothers, and sisters, today we are celebrating the patronal fest of our church – the Transfiguration of Our Lord and Saviour Jesus Christ. According to the three Evangelists, Matthew, Mark and Luke, the Lord took His disciples, Peter, John and James, and brought them up into a high mountain. There, when He was praying, His face was transfigured with the heavenly light and His raiment got radiant. The trembling disciples heard the voice of God the Father saying “This is my beloved Son, in whom I am well pleased” (Mt. 17:5).

“This vision of the Divine glory forestalled the Passion and death of Our Lord and Saviour Jesus Christ. As is said in the Kontakion of the Feast, Christ took His disciples onto the mountain and was transfigured before them so that, when they would see Him crucified, they would understand that His suffering was voluntary and would behold the glory which Christ had had in His Father even before the world came into being and people were created.

“The Gospel according to John, which does not tell about the Transfiguration, says about Our Lord Jesus Christ that He “was the true Light, which lighteth every man that cometh into the world. He was in the world, and the world was made by him, and the world knew him not. He came unto his own, and his own received him not. But as many as received him, to them gave he power to become the sons of God, even to them that believe on his name” (Jn. 1:9-12). The Divine light, characteristic of the very nature of the Son of God, and the glory, characteristic of Him as the Only-Begotten Son, were revealed on Mount Tabor to the disciples.

“According to God’s will, His beloved Son came into the world in the form of a humble human being. Of course, many people who had seen him felt that he was not just an ordinary man. Some regarded Him as a prophet, others said, “This is John the Baptist; he is risen from the dead” (Mt. 14:2). However, no one could see at the time that the man who was doing miracles, was preaching and telling parables, whose relatives were known to people, was God Incarnate Himself Whose Divine glory had been revealed to the disciples on Mount Tabor.

“The Gospel according to John reads that the Lord Jesus Christ came down to earth from heaven. Therefore, His return to the Father was nothing less than the ascension to heaven. He did not stay long on earth and did not belong to it. Jesus Christ was born of the Mother, but He had no earthly father, because his father was the Heavenly Father Himself… When Jesus came into this world, taking upon Him “the form of a servant” (Phil. 2:7), when He was suffering and dying on the Cross, the Divine glory was with Him.

“The Gospel according to John also tells us about the earthly mission of the Son of God: “For God so loved the world, that he gave his only begotten Son, that whosoever believeth in him should not perish, but have everlasting life” (Jn. 3:16). The Light which was shone upon the disciples on Mount Tabor was later revealed to the saints and ascetics who contemplated the Lord in the Divine light thanks to their faith and spiritual feats. The Lord would lift the veil which hid the Divine glory from people, opening for them the world which can only be seen through faith, obedience to the word and will of God.

“We know that Our Lord Jesus Christ was obedient to His Father “unto death, even the death of the cross” (Phil. 2:8). This obedience led Him to the Cross and made Him die for the sake of humanity. Yet, Christ always told His disciples that His death was voluntary. “No man taketh it [my life] from me, but I lay it down of myself,” He said (Jn. 10:18).

“Today the Lord strengthens us as He strengthened His disciples – by the vision of the Divine glory. Today we have an opportunity to ascend, together with the disciples of the Lord, Mount Tabor and behold His Transfiguration. It is made possible thanks to the Church and the Holy Eucharist we celebrate together. The Church becomes Mount Tabor for us.

“The Lord Jesus Christ Himself celebrates the Divine Sacrament, of which we are all partakers. He not only reveals to us His Divine light and glory, but gives to us His whole Self, so that we could eat His Body and drink His Blood, so that this Divine light would not just shine upon us from above, but would come into us and through us would shine upon people around us, transfiguring our human nature, both soul and body, by His Divine grace.

“Let us give thanks to the Lord Who came into this world and showed us His glory. Let us, through faith, prayer, good works and love for God and the neighbour, ascend Mount Tabor to see with our own eyes the glory of the Lord and to partake of His Divine light. Amen.”