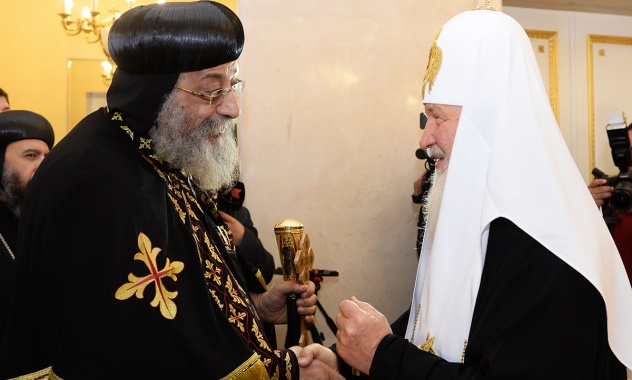 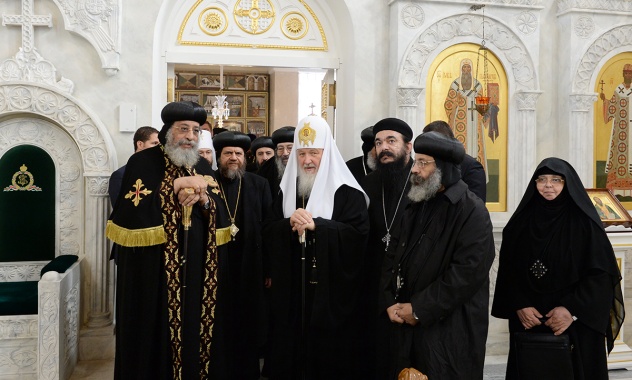 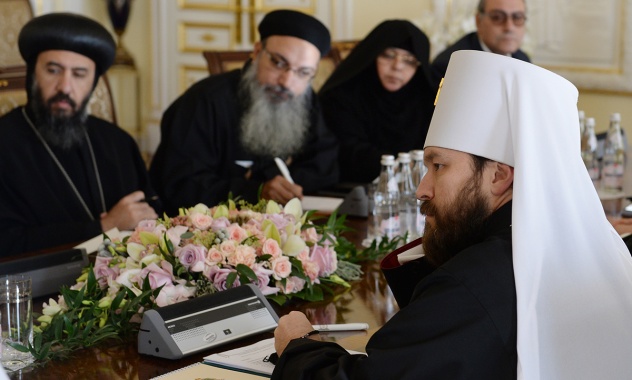 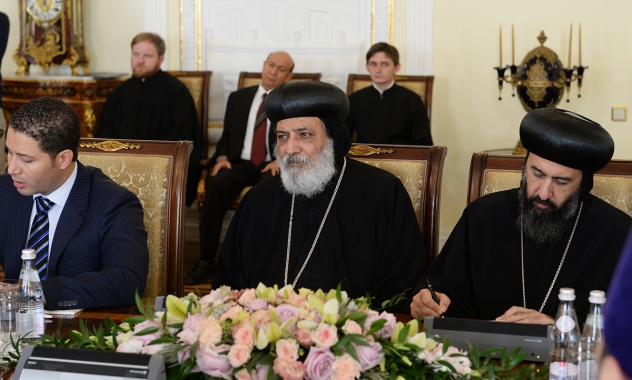 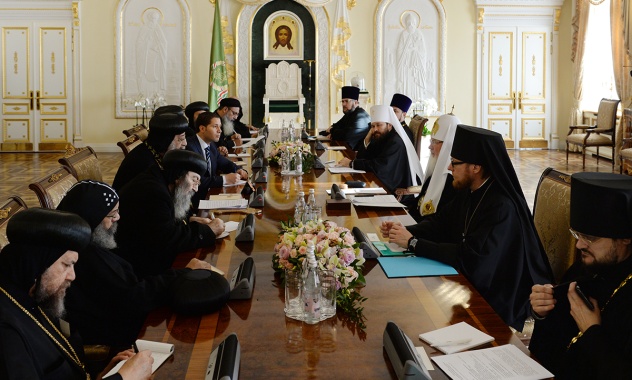 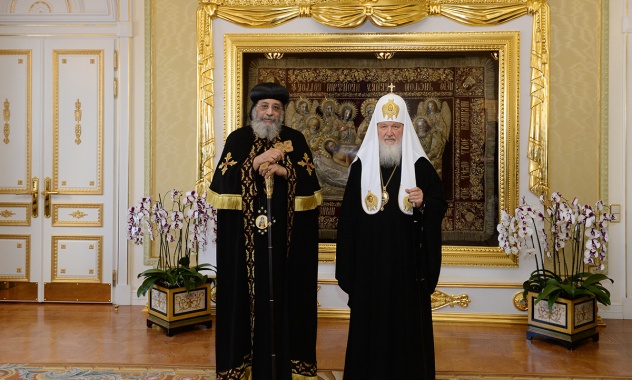 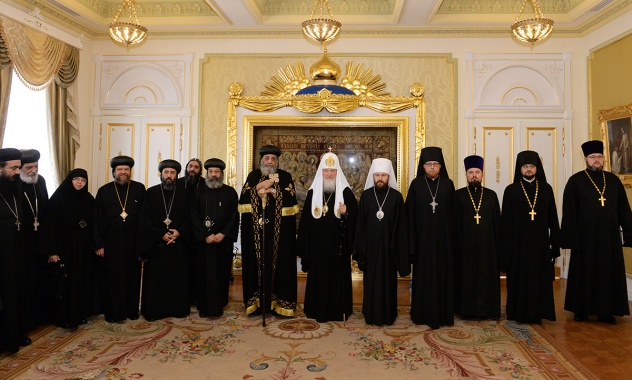 Taking part in the meeting, which was held at the Patriarch residence in St. Daniel’s Monastery, were members of the delegation accompanying the Patriarch, including Metropolitan Bishoy of Damietta; Bishop Raphael of Central Cairo, general secretary of the Holy Synod; Bishop Cyril of the Diocese of Milan; Bishop Serapion of Los Angeles; Bishop Angaelos of the Coptic Church in the United Kingdom; Fr Angelos Ishak, secretary to the Patriarch; Fr Boulos Halim, spoke person of the Coptic Church$ sister Edrosis Girgis, mother superior of the St. Theodore Convent in Cairo; and Prof. Dr. Ishak Ibrahim Agban, Port Said Theological and Pastoral College.

The Russian Orthodox Church was represented by Metropolitan Hilarion of Volokolamsk, chairman of the Moscow Patriarchate’s Department for External Church Relations (DECR), archimandrite Philaret (Bulekov), DECR vice-chairman; Rev. Viktor Kulaga, representative of the Patriarch of Moscow and All Russia to the Patriarch of Alexandria; hieromonk Stefan (Igumnov), DECR secretary for inter-Christian relations; and Rev. Alexander Vasyutin, a DECR staff member.

His Holiness Patriarch Kirill greeted Patriarch Tawadros and members of the delegation and noted that he considers his visit as a new stage in the relations between the two Churches.

His Holiness continued to say: ‘Our relations have always been good and cordial and active during the last forty years thanks to our participation in the work of several inter-Christian organizations. Theological dialogue carried on from 1985 to 1995 was very important as it allowed us to better understand the positions of our Churches on Christological issues.’

In 2005 the continuation was suggested, but, unfortunately, nothing happened due to the difficult situation in the Middles East. His Holiness suggested to discuss the matter.

A considerable attention during the talk was given to the situation in the Middle East, where the open persecution of the Church began in 2011. ‘Church buildings were destroyed, some two hundred thousand Copts were forced to leave Egypt, – His Holiness said. – You certainly know that the Russian Orthodox Church has made many statements in defence of Christians in Egypt and in the entire Middle East. We have kept direct contacts with the authorities of the Russian Federation on this issue. Also, we have worked with different international organizations and used our bilateral contacts, including meetings of the Patriarch with the heads of states, in order to attract attention to this problem.’

His Holiness Patriarch Kirill noted positive changes in Egypt and added: ‘We hope that these changes will last and that President al-Sisi’s good intentions concerning the Coptic Church will be carried out, including the restoration of the ruined churches and defence of the Christian population of the country.’

The Primate of the Russian Orthodox Church expressed his deep concern with the situation of Christians in North Africa and other countries of the Middle East, including Syria and Iraq. ‘We have been against civil war in Syria and against the attempts of certain countries to intervene. We know that religious peace in the country was undermined by the war. The destiny of the two abducted Metropolitan is still uncertain. We know that the radical had killed many priests and caused great damage to the people and the state. We see how the dangerous radical group called the Islamic State of Iraq and the Levant, which emerged out of the fire of the civil war, is realizing its aggressive intentions and bringing about the tragedy of Christians in Iraq.’

His Holiness Patriarch Kirill shared reminiscences of his visit to Iraq in 2002, saying that he was ‘deeply moved by the asceticism of the monks. I saw that people had been protected and could openly profess their faith, but now thousands of Christians have to leave the country because of the terrible war.’ He added that the Russian Church is raising her voice in defence of Christians in Iraq, Syria, Libya and other countries where the life of Christians is endangered. The Moscow Patriarchate has initiated several Pan-Orthodox statements on the situation of Christians in the Middle East.’

His Holiness Pope and Patriarch Tawadros said to the Primate of the Russian Orthodox Church: ‘I am very glad to meet You, Your Holiness. This meeting is very important to me… I hope that it will strengthen bilateral relations between our Churches. I have been dreaming to visit Russia; I have read many books about your country, about Orthodox theology and Orthodox monasteries. A year ago, in an interview to ‘Russia Today’ I mentioned my wish to visit Russia, and my dream has come true.’

Patriarch Tawadros spoke about history of the Coptic Church and its life at present. He said: ‘We have lived in peace and accord with our brothers Moslems for over fourteen centuries as we try to bring the Lord’s love to all… Now, after a difficult period, during which people suffered and churches were destroyed, we thank the Lord for a new period in the history of Egypt.’

The head of the Coptic Church expressed deep gratitude to the Russian Orthodox Church and its Primate for the support of Christians in the Middle East. Speaking about their situations in the region, Patriarch Tawadros said: ‘We pray to God to protect our brothers from sufferings they are undergoing.’

his hope that His Holiness Patriarch Kirill will visit Egypt again.

Patriarch Tawadros mentioned cooperation in peacemaking, culture and education as possible guidelines for the dialogue.

The sides underscored the importance of the continuation of theological dialogue.