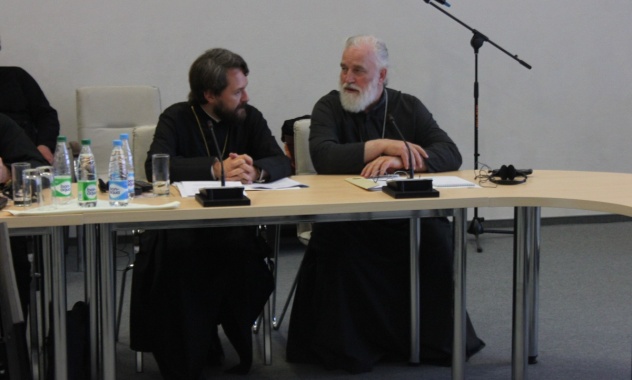 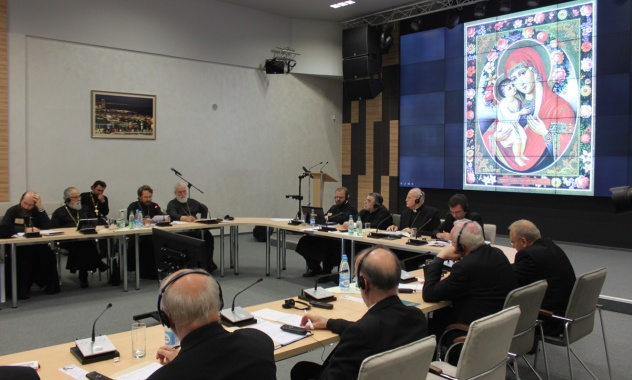 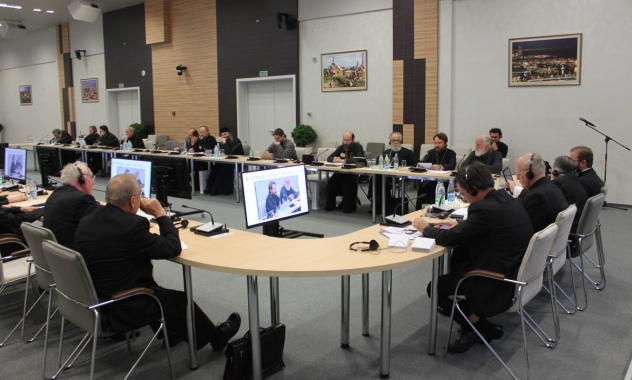 On June 3, 2014, the 4th European Orthodox-Catholic Forum on Religion and Cultural Pluralism: Challenges for the Christian Churches in Europe held its first plenary session.

It was opened by the co-chairman from the Orthodox side, Metropolitan Gennadios of Sassima, Patriarchate of Constantinople. Papers were presented by the co-chairman from the Catholic side, Cardinal Peter Erdö, as well as Metropolitan Pavel of Minsk and Slutsk, Patriarchal Exarch for All Belarus, Rev. Hyacinthe Destivelle of the Pontifical Council for Promoting Christian Unity, Prof. H. Tsironis of the University of Thessaloniki (Greek Orthodox Church), and Archbishop Paolo Pezzi of the Catholic Diocese of the Mother of God in Moscow.

Metropolitan Hilarion of Volokolamsk, head of the Moscow Patriarchate Department for External Church Relations presented a paper on the Role of Secular and Christian Values in Contemporary Multicultural European Society.

In the beginning of his presentation, His Eminence noted that from the moment of its formation the ancient Christian community was multicultural and multi-ethnic and pluralism of opinions and the freedom of discussion and self-expression were inherent in it from the very beginning. However, “in speaking of cultural diversity, it should be admitted that in our days cultural trends are directed so differently that it is hardly possible to give them an unambiguous assessment”.

According to Metropolitan Hilarion, cultural pluralism is inseparable from freedom of creativity, while freedom is inseparable from responsibility. The true challenge for the Christian consciousness is the fact that in our time the moral dimension of freedom is negated altogether, and the freedom to create in particular. “It is this content that is concretely fortified in the concept of ‘cultural pluralism’, which is reduced to the simple diversity of the numerous forms of creative self-expression, whereas their content should not be bracketed”, the archpastor stated. In this case, he believes, “cultural pluralism turns into an element of dominant ideology”.

“We believe that to remove the moral dimension from European culture would mean to deprive Europeans of culture itself. At the same time, we see before our very eyes the self-destruction of European Christian culture being replaced by a pseudo-culture, which is morally neural and in many instances openly and demonstratively immoral”, he stated.

Speaking of religious pluralism, Metropolitan Hilarion noted that if we mean by this term the multiplicity of religions, then this kind of pluralism is a reality of the world we live in. “It cannot be denied or reviewed, but it must be taken into account when building up relationships with representatives of other faiths. At the same time, the idea of equating sectarian movements, who often trample upon human dignity, with the religions of the majority, is wrong and unjustified… True religious pluralism is an atmosphere which unites people belonging to various religious traditions, yet at the same time sharing similar ethical concepts. There can be no unity among those who fight against sin and those who encourage and support it”.

His Eminence drew the Forum’s attention to the fact that Europe has already encountered a growing pressure upon Christians who adhere to traditional values, for example in the sphere of the family and marriage.

He singled out as a sensitive problem for contemporary Christianity in Europe the fact that in recent years the “inner Christian pluralism” encountered the same problems as the secular pluralism. “The re-evaluation of Christian moral teaching by a number of Protestant denominations and the blessing of same-sex unions has led to us Christians being unable to speak about our moral unity in the same way that we were able to do so thirty years ago. These attitudes in the Protestant world make difficult communication between the various Christian confessions and naturally force us to seek dialogue where it is bolstered by consensus”.

Metropolitan Hilarion is convinced that “in this situation co-operation between Orthodox and Catholics in the cause of defending traditional Christian morality acquires a special importance”. He called it a common duty to bear witness to the permanent significance of these ethical principles which were established by Christ and sanctified by the authority of the centuries-old tradition of the Church.

“One of the distinguishing features of Christianity is its ability to overcome cultural barriers, and we are called upon to unite in the cause of returning religious pluralism to its concepts and forms created by European civilization with the direct participation of the Christian Churches of the continent. It is precisely Christianity, which in Europe still is the religion of the majority, that can create the conditions for genuine freedom in the realm of culture and make the continent a hospitable home for peoples of other cultures and religions”, Metropolitan Hilarion said in the conclusion of his presentation.

After the first plenary session, participants attended a concert of Minsk choirs and a reception given by the City Council Chairman N. Ladutko. The mayor warmly welcomed the guests, underlining that the thriving of the Byelorussian capital city today is directly linked with the basic role played by traditional moral values and Christian morality in the life of most people in Minsk.