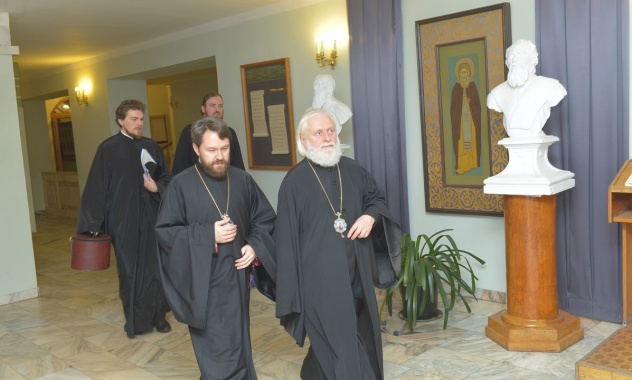 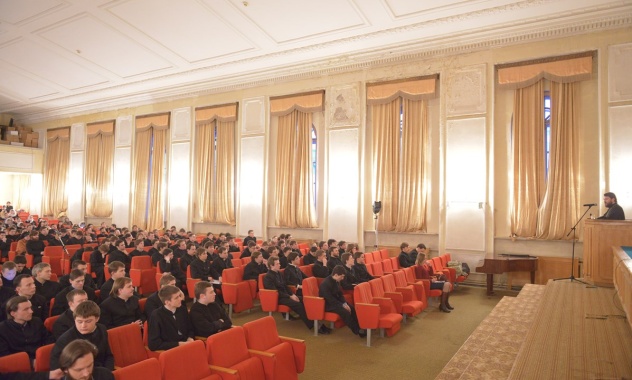 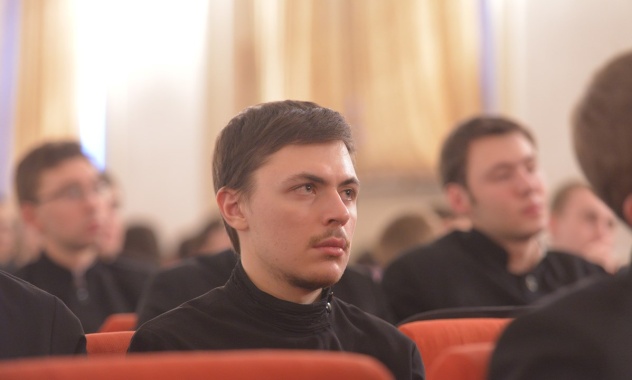 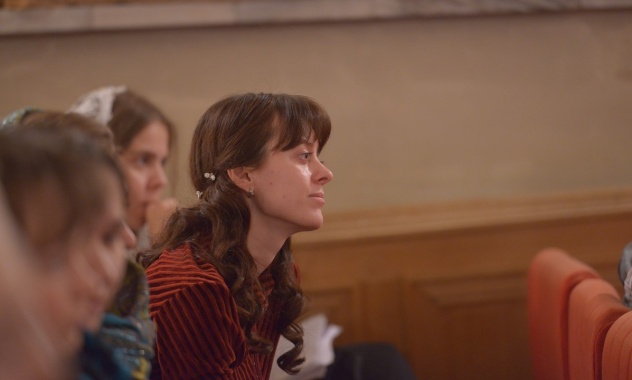 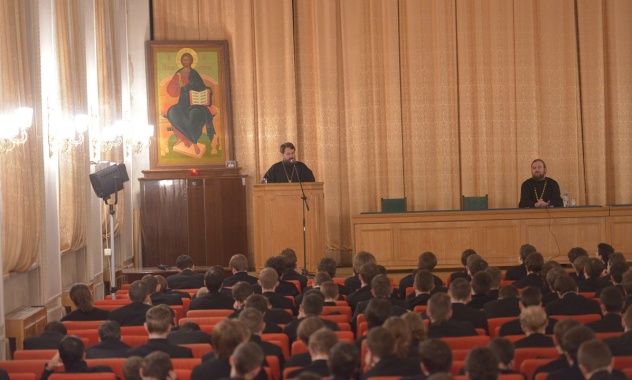 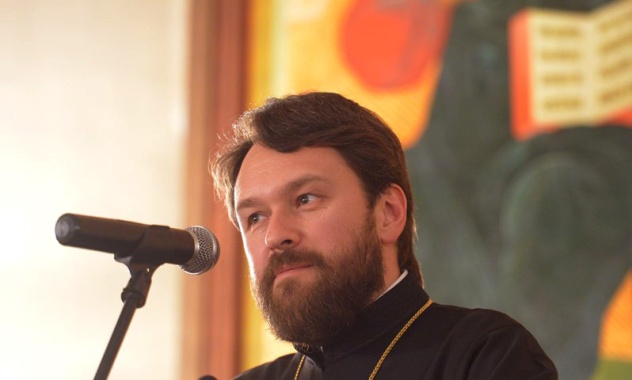 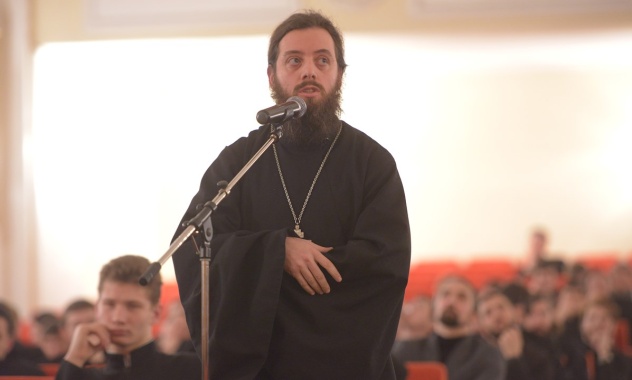 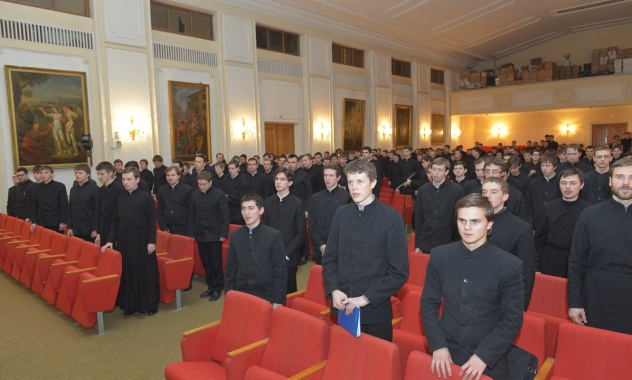 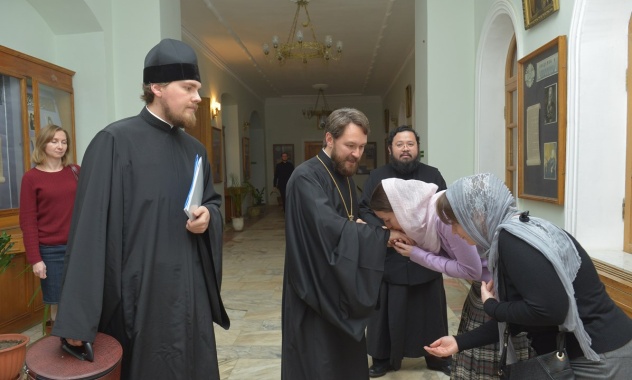 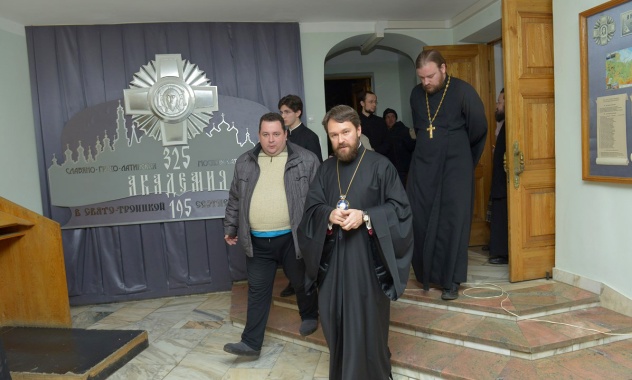 On December 11, 2013, Metropolitan Hilarion of Volokolamsk, chairman of the Department for External Church Relations, rector of the Ss Cyril and Methodius Institute of Post-Graduate Studies and chairman of the Synodal Biblical and Theological Commission, read a lecture to students of Moscow theological school on “Inter-Orthodox Relations at the Present Stage”.

In the beginning of his lecture, the DECR chairman pointed to the positive dynamics observed at present in the inter-Orthodox relations. “The Russian Orthodox Church is one of the Local Orthodox Churches and she carries out her service in unity with other Orthodox Churches. The existing structure of governance over the Orthodox Church globally has been shaped for centuries; it is a result of long development”, he said. At the same time, he mentioned a number of still unsolved problems persisting today on both the common Orthodox level and the level of bilateral relations between particular Local Churches.

Metropolitan Hilarion also spoke about large-scale inter-Orthodox celebrations which took place this year. Among them are the 1025th anniversary of the Baptism of Rus’ and the 1700th anniversary of the Edict of Milan. The first event, which took place in Moscow, Kiev and Minsk, gathered together heads and representatives of all the Orthodox Churches, with nine Churches represented on the level of Primates. “This event had a great importance for cooperation between Local Orthodox Churches also because primates have changed in some Churches recently, and they had an opportunity for meeting one another. And those who could not come sent their fraternal messages to the Primate of the Russian Orthodox Church”, he noted.

The participants in the celebrations became witnesses to results of an intensive spiritual revival that has taken place in the last 25 years in the canonical territory of the Russian Orthodox Church. “These celebrations underscored the unique multinational nature of our Church, which is the Church not only of the Russian Federation but also the Church of Ukraine, Belarus and other countries which we unite in the notion of Holy Rus’”, the archpastor stated, noting that the anniversary celebrations reiterated that Holy Rus’ continues living as a single organism that exists across state and political borders, uniting all people who trace their church tradition to Prince Vladimir and the Dnieper baptismal font.

Another significant date, the 1700th anniversary of the Edict of Milan, marked the beginning of the era of Christian Europe. The cities of Nis, where Emperor Constantine Equal-to-the-Apostles was born, and Podgorica became centers of common Orthodox celebrations during which a great number of primates and representatives of Churches had an opportunity for praying together. The celebrations were led by His Holiness Patriarch Bartholomew of Constantinople. Along with festive events, there were bilateral meetings, in particular, a meeting between the primates of the Churches of Constantinople and Russia.

Metropolitan Hilarion also spoke in detail about the preparations for a Pan-Orthodox Council, which have been in the works since 1961. He made an overview of issues proposed for consideration by the Council, pointing to the need to actualize some of them. In particular, he referred to the persecution of Christians in the Middle East as a common challenge. After the lecture, Metropolitan Hilarion answered questions from professors and students.