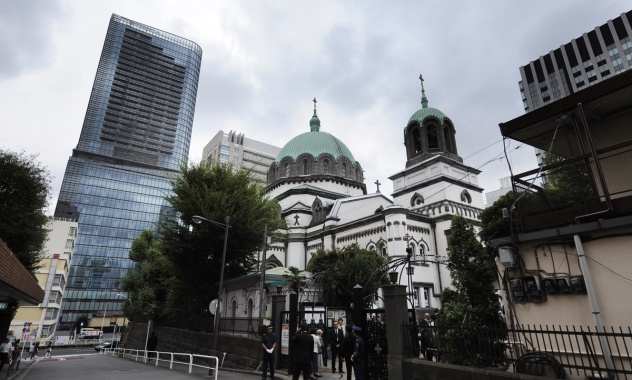 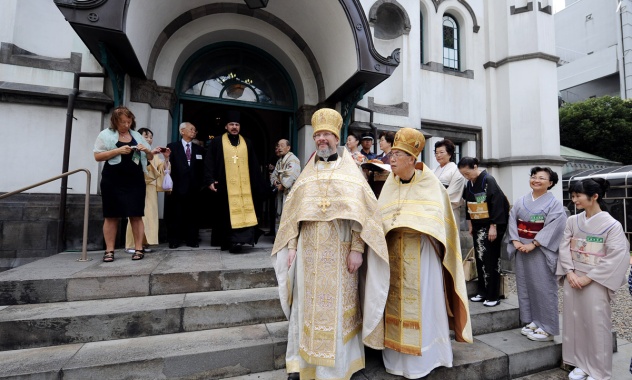 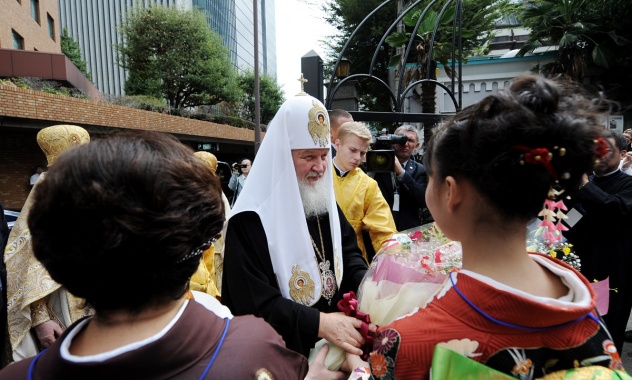 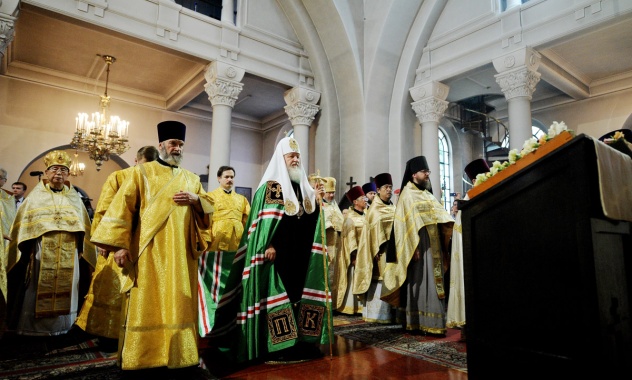 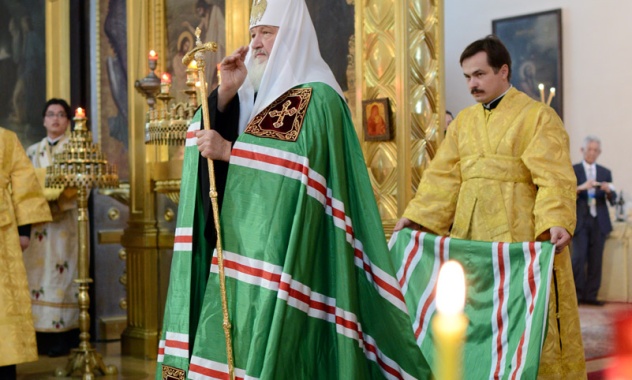 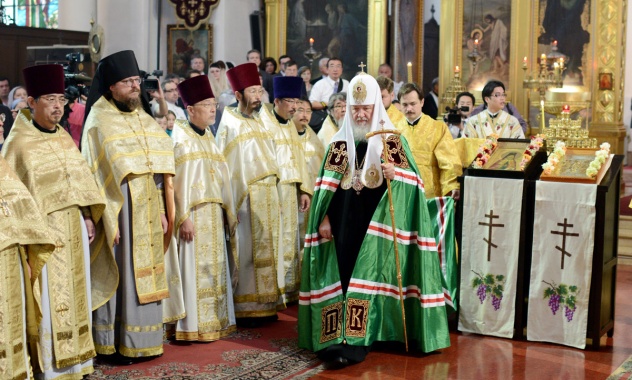 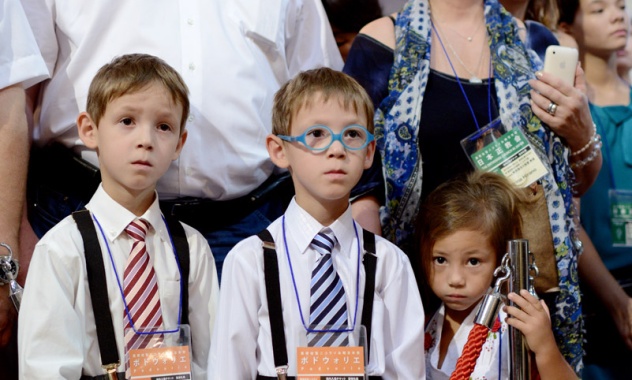 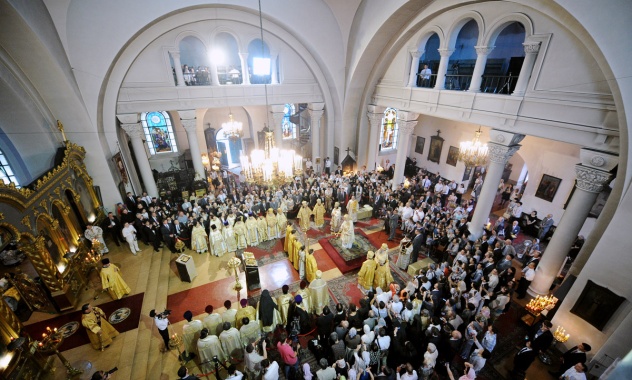 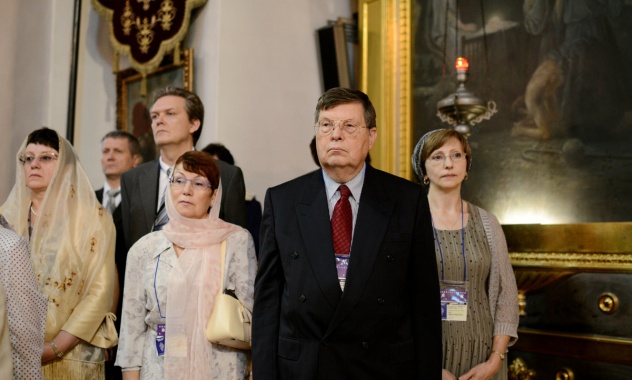 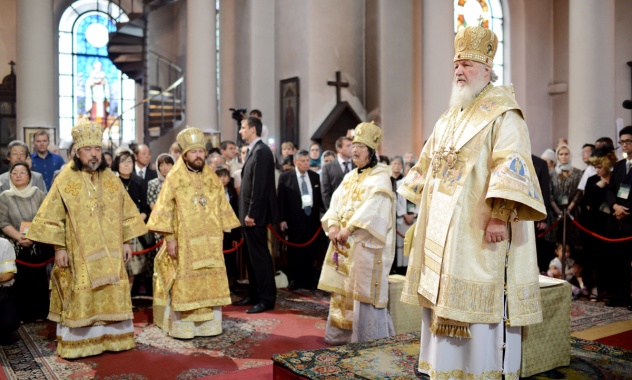 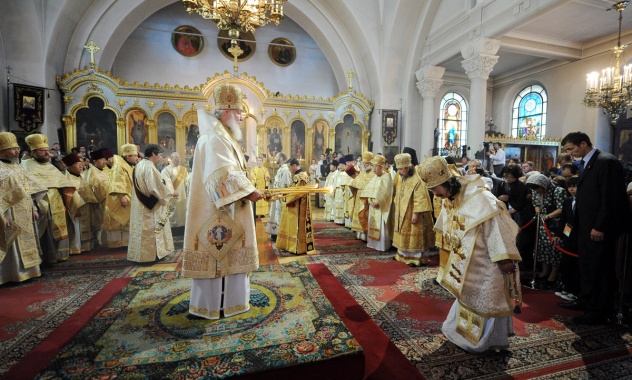 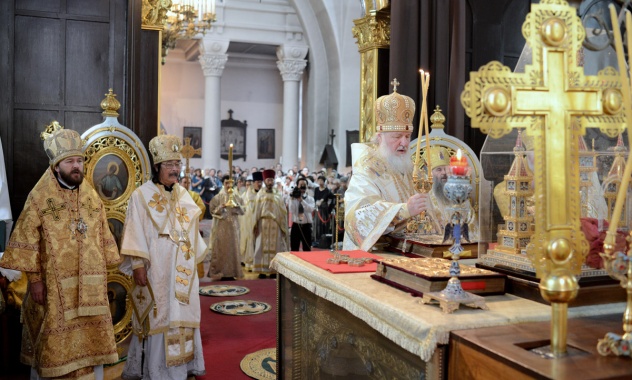 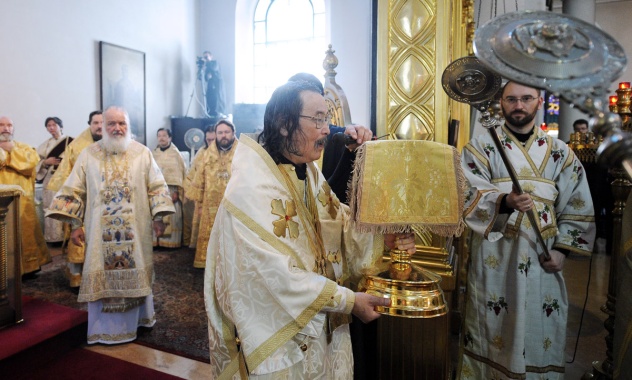 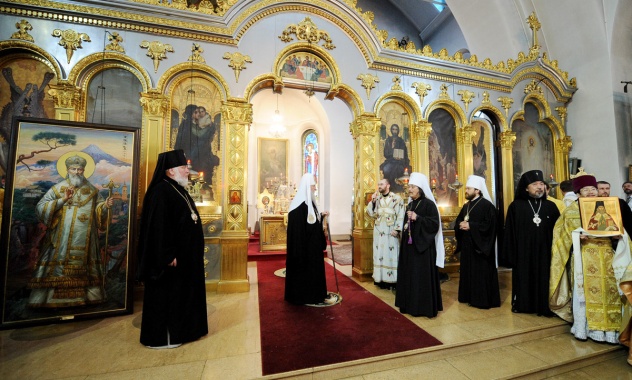 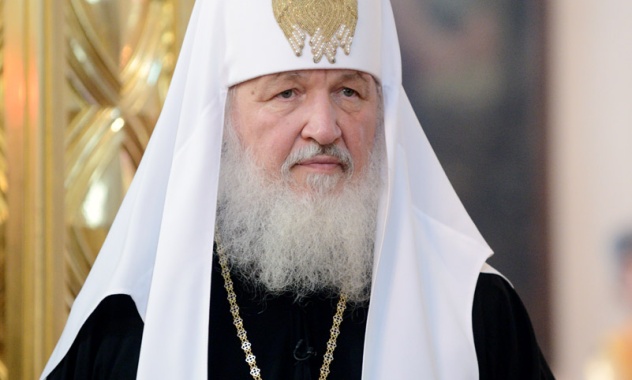 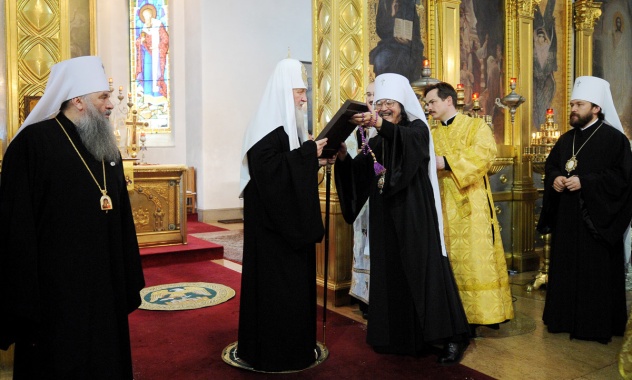 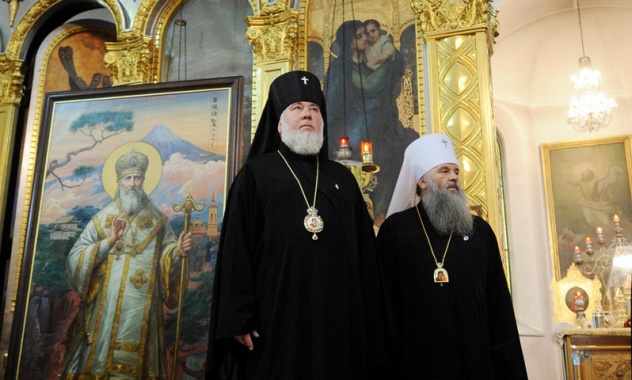 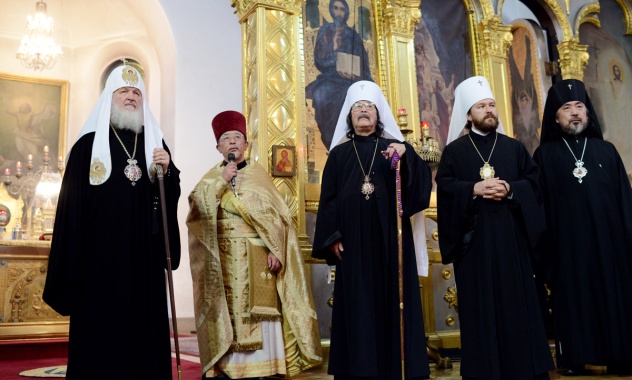 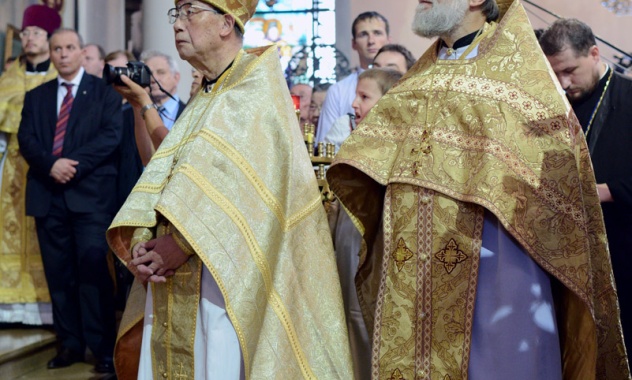 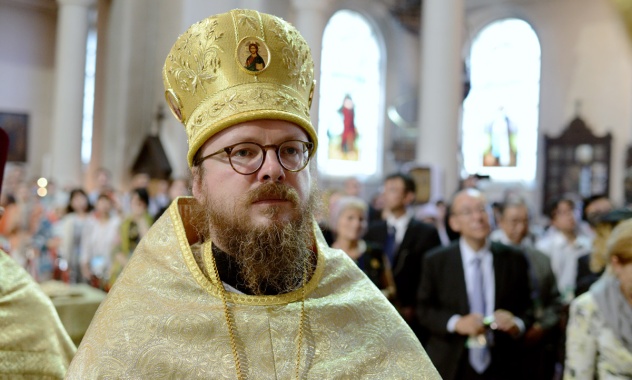 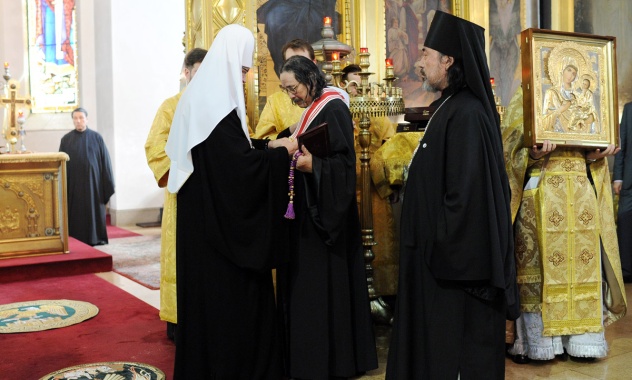 On September 16, 2012, the 15th Sunday after Pentecost, His Holiness Patriarch Kirill of Moscow and All Russia, while on a primatial visit to Japan, celebrated the Divine Liturgy at the Cathedral of the Resurrection in Tokyo. Among his con-celebrants were Metropolitan Daniel of Tokyo, primate of the Japanese Autonomous Orthodox Church, Metropolitan Varsonofy of Saransk and Mordovia, chancellor of the Moscow Patriarchate, Metropolitan Hilarion, head of the Moscow Patriarchate’s department for external church relations, Archbishop Varfolomey of Rovno and Ostrog, Archbishop Seraphim of Sendai, Bishop Sergiy of Solnechnogorsk, head of the Moscow Patriarchate’s administrative secretariat, Archpriest Nikolay Balashov, DECR vice-chairman, Archpriest Nikolay Katsuban, dean of the ROC Tokyo representation, and Japanese clergy.

The Patriarchal service, which was celebrated in both Japanese and Church Slavonic, was attended by numerous faithful of the Japanese Autonomous Orthodox Church and Russians living in Japan.

After the service, Metropolitan Daniel of Tokyo and All Japan greeted Patriarch Kirill, saying, ‘We are happy to greet you in Japan, in this church, and to participate together with you in the celebrations in honour of St. Nicholas of Japan’, who brought Orthodoxy to the Japanese land a century and a half ago. He founded a Church which exists to this day. ‘It often happens in history that human deeds are forgotten one hundred years later, but God’s deeds remain for centuries. God’s deeds were revealed through St. Nicholas to stay for ever. They live in the hearts of Japanese Christians. And though the history of our Church is only 150 year old, we believe it will live for hundreds of years. We will continue the task of St. Nicholas in the Japanese land, among Japanese people, in the Japanese language’.

Metropolitan Daniel also noted that a year and a half ago a terrible disaster befell Japan. A great number of people were affected; a considerable number of Orthodox churches were seriously damaged. The Russian Church responded to that misfortune. ‘At that time we could feel in full measure the love that the Russian Orthodox Church has for us and thanks to her support we continue to restore our churches and to reconstruct what was damaged’.

‘Today in the Cathedral of the Resurrection in Tokyo, in a solemn and beautiful setting, with so many people who have flocked to the cathedral, we remember the centenary of the demise of St. Nicholas. Both in Hakodate and Sendai and in Tokyo, wherever I have come, whatever Orthodox place I have visited – everywhere I have seen a trace of the work done by Nicholas Equal-to-the-Apostles. For over 50 years of his service in Japan, the saint created a local Japanese Church, which numbered 33 thousand people. It is a striking result of the mission carried out by a one who came to Japan as quite a young man without any knowledge of the local language or culture but who identified himself with the Japanese people by absorbing the Japanese culture and uniting it with Orthodoxy. This effort brought such an abundant fruit in the persons of thousands and thousands of Japanese believers. The question arises: What was the secret of such a success?

‘Today’s Reading of the Gospel helps us to understand why St. Nicholas succeeded in enlightening over 33 thousand people by bringing them to Christ, why he became a great missionary. When asked which commandment was the greatest, Christ answered, ‘You shall love the Lord your God and your neighbour as yourself’ (cf. Mt. 22:37-40).

‘The commandment is law, a certain rule. Let us think however: can one come to love a person by a rule or a law? By law one can refuse to kill or to steal; one can refuse to deceive, though it is more difficult to do. But how can one love by law? The Lord said however that the commandment of love was the first and foremost one, that is, the first and foremost law for people.

‘In order to answer this question I would like here, in Japan, refer to the samurai wisdom, which you must know better than me. The samurais used to say that their way was the one of death, that a samurai must live as though his body were dead. Then he frees himself to become strong and independent of death, his fear disappears.

‘In today’s Letter of St. Paul to the Corinthians we also encounter words about death. The apostle says that we should carry about in the body the dying of the Lord Jesus, that the life of Jesus also may be manifested in our body (cf. 2 Cor. 4:10). In the works of every Holy Father, who wrote about it, we see the same interpretation: the death of Christ in our body is our ability to be crucified together with Christ, as it were, to assume crucifixion together with Him, not to kill our body but to kill and overcome fear which is in our nature.

‘Just as Christ ascended the Cross, sacrificing Oneself for people, so we, crucifying ourselves together with Him, open our hearts to the way of feat and sacrifice for the sake of another. It is through this self-sacrifice that the mystery of man’s love of God and another human being becomes open to us. God can give everyone the gift of love, and it often blazes up like gunpowder, brightly and instantly, with a great power. We know however that this fire often dies out. Indeed, for love to exist one should know how to scarify oneself. And when spouses dedicate themselves to each other, they scarify themselves for each other. When the same happens in relations between parents and children then there is love over which time has no power. It is a great power which transforms a person.

‘The secret of St. Nicholas’s success is that he lived by such love. He wholly dedicated himself to others. It is only the love of people and the strong faith in the Lord and love of Him that was the reason of this great missionary success. St. Nicholas taught people during his lifetime, but after his death, looking into his life and reflecting on his feat and the success of his mission, we also learn from him just as his contemporaries did it.

‘Love is tested in a special way by sorrows and suffering: it is easy to love in a situation of wellbeing, comfort and beauty, but it is much more difficult to love when disease, misfortune or disaster befalls your loved ones. But it is against the background of grief, misfortune and disasters that the beauty of this greatest feeling, which God was pleased to put in the basis of human relations, becomes so vivid.

‘Speaking about it, I mean in the first place the terrible disaster that befell the Japanese people a year and a half ago. The whole world admired the way in which the Japanese struggled with that element, showing solidarity, discipline, self-sacrifice and mutual help. People in Russia took that catastrophe close to their hearts. The terrible pictures of the flood, of the formidable wave of the ocean shocked the consciousness of millions. They began to respond with all their hearts by, among other things, raising funds for giving aid.

‘Today that tragedy is already behind, but its traces are still visible. I have had an opportunity to see them with my own eyes when I was in Sendai where I continued to commemorate all who died and asked the Lord to forgive their sins and to accept them in His Kingdom. We pray for the prosperity of the Japanese people, so that the Lord may protect you against such terrible shocks and help all to live in peace, accord and unanimity, growing from strength to strength.

‘Marking the centenary of the demise of St. Nicholas of Japan, we pray to him that he may intercede before God for His mercy for the peoples of Japan and Russia. We pray that the good feelings aroused by the terrible tragedy may not die out, that good relations between countries and nations may grow through the awareness of the fragility of human life.

‘We believe that St. Nicholas, who belonged at the same time to Japan and Russia and was a spiritual bridge uniting our nations, intercedes for us so that there may be a great number of such bridges today, many ties to hold the two neighbouring nations strongly together in unanimity and as much as possible in love’.

Patriarch Kirill also stated that the Holy Synod of the Russian Orthodox Church resolved to establish the Order of St. Nicholas Equal-to-the-Apostles, Archbishop of Japan. The first person to be decorated with this Order of the First Degree was the primate of the Japanese Autonomous Church, Metropolitan Daniel. His Holiness also presented him with a commemorative pectoral icon and a cross. Among those who were decorated with the Order of St. Nicholas of Japan (Degrees II and III) were Archbishop Seraphim of Sendai, Protopresbyter Justin Yamaguchi, Archpriest Savva Onami and Archdeacon Paul Matsura.

Patriarch Kirill presented the Japanese Church with a portrait of St. Nicholas and an Icon of Our Lady of Tikhvin.

The Cathedral of the Holy Resurrection is known in Japan as Nikolay-do. The first church was built in 1871 when the Japanese Orthodox Mission led by Archimandrite Nikolay (Kasatkin) moved to Tokyo. The domestic Chapel of St. Nicholas was too small, and immediately after his episcopal consecration, Bishop Nicholas began raising funds for the construction of a cathedral in Tokyo, preaching throughout Russia. He managed to collect over 130 thousand roubles.

In March 1884, the foundation of the cathedral was laid on Surugadai Hill next to the Orthodox Mission. In February 1891 the Cathedral of the Holy Resurrection was consecrated. Cesarevich Nicholas, heir to the Russian throne, timed his visit to Japan to the consecration of the cathedral. However, he was not to reach Tokyo because of the attempt made on his life in Otsu.

In 1917, the Cathedral of the Resurrection, just as the whole Japanese Mission, was deprived of the financial support from Russia. The seminary and the women’s school were also closed.

The great earthquake in Kanto on September 1, 1923, caused an enormous damage to the church. During an urgent council convened in October 1023, it was resolved that the Church of the Resurrection be restored despite the radical decrease in the number of parishioners. The restored cathedral was consecrated in December 1929.

In 1946, the state of the church was described as neglected. The metal fence and copper sheet from the roof were sold. Worship serviced was almost discontinued.

Services were resumed in 1949. In December 1950, a Tripe Committee, consisting of Japanese, Russians and Greeks, was established at the church to raise funds for the repair of the cathedral.

In 1962, the Cathedral of the Resurrection was granted the official status of major cultural monument in Japan.