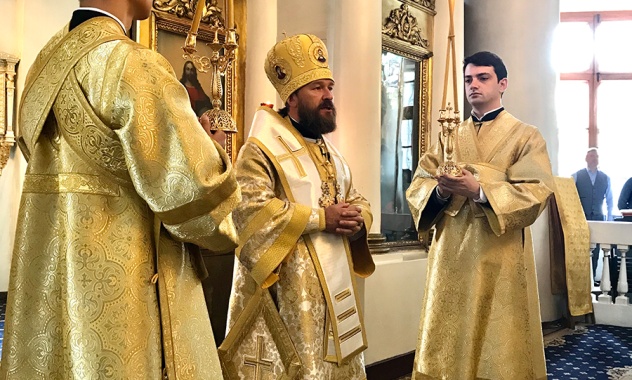 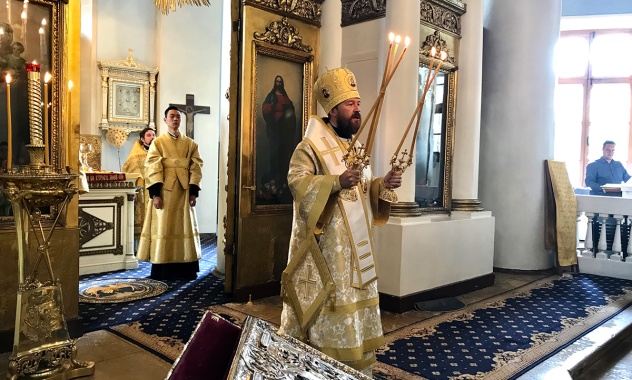 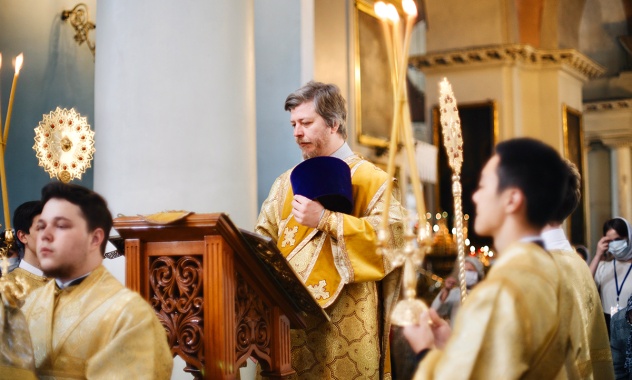 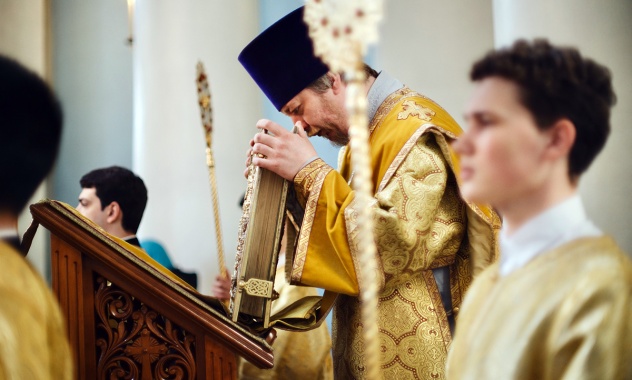 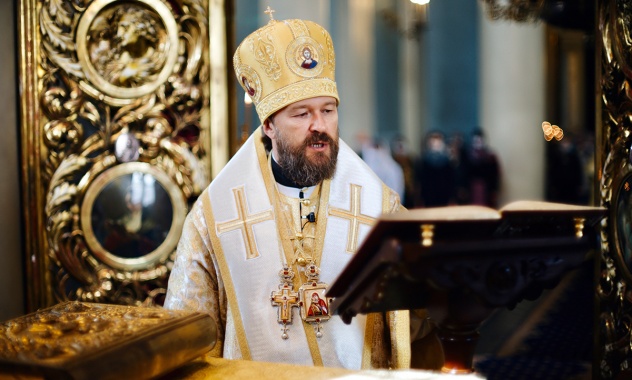 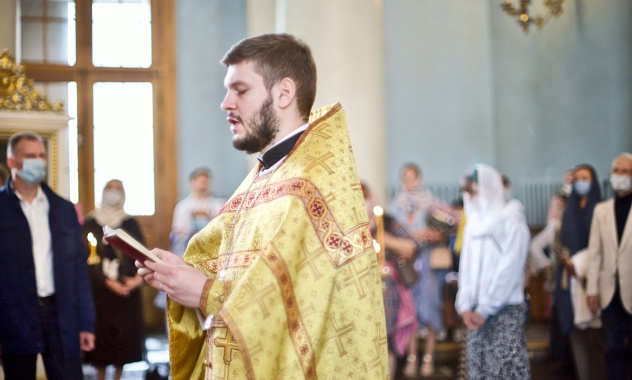 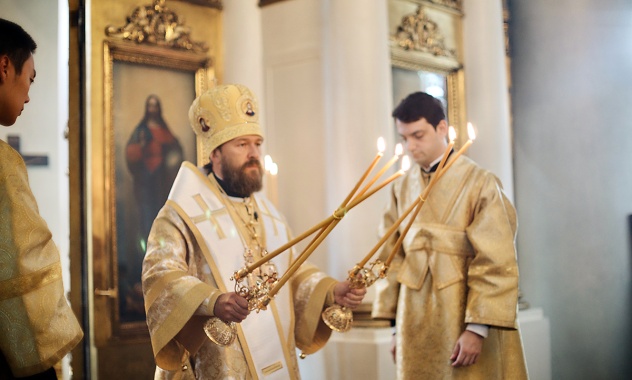 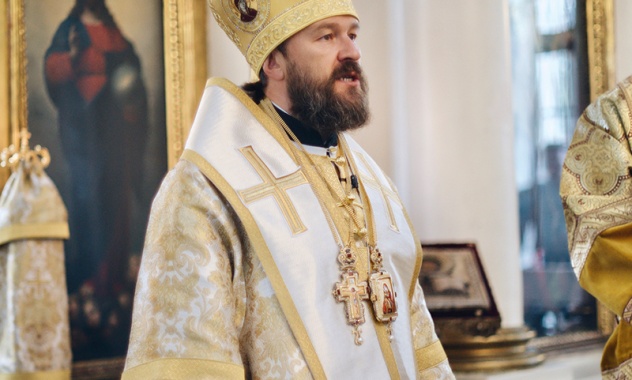 On 24th July 2020, commemoration day of the Holy Princess Olga, Equal-to-the-Apostles, Metropolitan Hilarion of Volokolamsk celebrated the Divine Liturgy at the Church of the “Joy of All Who Sorrow” Icon of the Mother of God in Bolshaya Ordynka Street, Moscow.

During the Litany of Fervent Supplication, prayerful petitions were read out in view of the persisting threat of the spreading coronavirus infection. After that Metropolitan Hilarion lifted up a prayer which is read at a time of harmful pestilence.

At the end of the divine service the archpastor delivered a homily, saying:

“I greet all of you, dear Fathers, dear brothers and sisters, with the commemoration day of the Holy Great Princess Olga, Equal-to-the-Apostles. I wholeheartedly congratulate those who are celebrating their name day today.

“On this day we commemorate the first baptizer of the Holy Rus’, who brought up in godliness her grandson, Prince Vladimir, Equal-to-the-Apostles. As we know from historical sources, Olga herself received baptism from the Patriarch of Constantinople, and the Emperor of Constantinople became her godfather. The sacrament of baptism of the Holy Great Princess Olga took place in the Church of Hagia Sophia.

“I would like to tell you about this church, for today Muslim prayers will be said there for the first time in many decades. Such was the decision of the Turkish rulers – the decision, on which His Holiness Patriarch Kirill and our Holy Synod, as well as the Primates of other Local Orthodox Churches expressed their opinion. However, it is not a common practice for the Turkish rulers to hearken to the voices of Orthodox people.

“The church was built in the 6th century by the Holy Emperor Justinian and was modelled on the ancient Old Testament tabernacle and the Temple in Jerusalem, albeit in its architectural forms it had nothing to do with them. The Temple in Jerusalem, as we know from its reconstruction, was built in the antique style and had colonnades, while Hagia Sophia was designed as a new architectural marvel, because in this wonderful cathedral architects tried to realize the ideal of a church as an image of the Universe, and its majestic dome, over 30 metres in diameter, was to symbolise heavens. Just imagine, how much such dome weighs, and it does not stand on columns or pillars, but seems to hang in the air. To prevent it from collapsing on people’s heads, an artful system of semi-domes was designed, which took on them the weight of this grand heavens-like dome.

“The remarkable architecture harmonized with equally remarkable interior decoration: the church was decorated with marble slabs, and its upper parts, including the dome and semi-domes, were adorned with precious mosaics. These golden heavens were shining above people’s heads, so it is not fortuitous that those who entered Hagia Sophia did not know where they found themselves, whether they were on earth or not, because they had never seen such beauty created by human hands. And when solemn divine services were celebrated in this church with the participation of the Patriarch, the Emperor, numerous priests and over 400 singers and readers, it created an indelible impression.

“Time and again throughout its history the Church of Hagia Sophia was subjected to desecration and was in a state of dilapidation. For the first time it was desecrated by iconoclasts, when it came into the Byzantine Emperors’ head that there must be no sacred images in churches. By that time the image of the Theotokos had already been painted on the sanctuary’s apse of Hagia Sophia, so the iconoclasts chipped it off. It was restored only after the victory over the iconoclastic heresy. To this day this image of the 9th century stands in splendor on the sanctuary’s apse of this holy church, turned into a mosque.

“After in 1453 Constantinople fell, unable to withstand the onslaught of the Turks, the Cathedral of Hagia Sophia was turned into a mosque. Most of the sacred images were chipped off, and those that had survived due to the lack of hammers or time, were simply painted over. It was those images that were restored in the 20th century, and looking at them now we can imagine what this magnificent church was like in the years of its glory. In 1934 it was turned into a museum. Just in recent months talks have begun again that Hagia Sophia is to become a mosque; and today the first Muslim prayers are being said there.

“However, for us, Orthodox Christians, Hagia Sophia will always remain a church dedicated to the Lord Jesus Christ. As you know, the cathedral was consecrated not in honour of a holy woman called Sophia. Sophia is the Wisdom of God, one of the Names of our Saviour. The Church of Hagia Sophia was built in honour of the Lord Jesus Christ, and the Nativity of Christ became its patronal feast. The Sophia Cathedral in Kiev, and later the Sophia Cathedral in Novgorod, modelled on this church, were also dedicated to the Lord.

“We grieve because the Church of Hagia Sophia in Constantinople is now deprived of its splendor and is used for other than intended purpose. Yet, we see that God’s mercy towards the Orthodox Church does not grow scarce. Somewhere churches are being desecrated, but in other places new majestic cathedrals are being constructed. One of them is the Church of St Sava in Belgrade, capital of Serbia, built after the fashion of Hagia Sophia. Its construction lasted for over a hundred years, and now interior decoration works are nearing completion. Engaged in this work, financed by the Russian state with the assistance of the Russian Orthodox Church, are mosaic artists from Russia. Soon the cathedral in Belgrade will be shining in its beauty, and coming there we will be able to see what Hagia Sophia would have looked like if had not been time and again desecrated and defiled.

“In the 20th century we suffered for many decades, when our holy churches were closed and used for other than intended purpose, and many of them were even rased to the ground. Yet, nowadays our Church enjoys all the opportunities which arose after the Millennium of the Baptism of Russia. We are building new churches, big and small, magnificent and less notable. And let no one say to us that we ‘have built too many of them,’ that these churches will stand unattended. Enter any church on Sunday or on any feast day, be it in the centre of Moscow or on the outskirts, and you will see that it is full of worshippers. Churches are being built for people. Some may be dedicated to the Lord Himself, others – to the Most Holy Theotokos or a saint, but every church is a place where God is present. Participating in the divine services celebrated there is the whole synaxis of saints, starting from the Most Holy Theotokos and ending with the saints of our time, including all heavenly angels and deceased Orthodox Christians. Every church reveals the glory of God that fills it.

“I would like to wish all of us that we may always love our churches, come there to pray, participate in the Liturgy, partake of the Holy Mysteries of Christ, that we may feel in a church what envoys of the Holy Prince Vladimir felt when they entered the Church of Hagia Sophia in Constantinople. Having seen its splendor, having heard beautiful church singing, the stunned envoys returned to the Prince and said, ‘We have travelled around the world, visited Muslims, and Jews, and western Christians, but in Hagia Sophia we no longer knew whether we were in heaven or on earth, because there is no such beauty in the world.”