Metropolitan Hilarion of Volokolamsk completes his visit to Rome 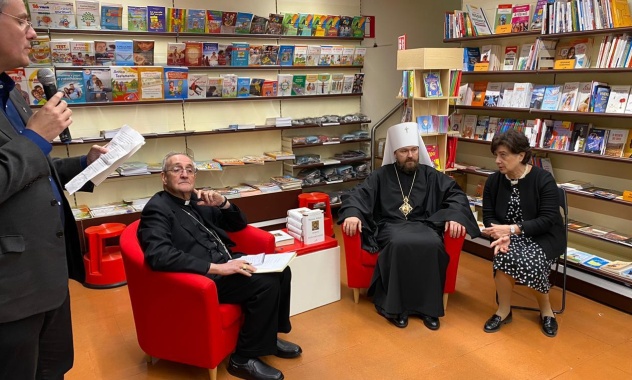 On 13th February 2020, after his meeting with Pope Francis, Metropolitan Hilarion of Volokolamsk, chairman of the Moscow Patriarchate’s Department for External Church Relations, visited Libreria Romani book store in Rome, where the Italian edition of his books – Volumes 2 and 6 of the series Jesus Christ. His Life and Teaching – was presented.

Presenting the books was Archbishop Antonio Menini, representative of the Vatican’s Secretariat of Sate, former Apostolic Nuncio to the Russian Federation.

Among those who attended the event were Prof. Adriano Roccucci, specialist in the contemporary church history; Ms. Giovanna Paravicini, cultural attaché of the Vatican’s representation to Russia; Mr. Peter Humeniuk, head of the Department for Relations with Russia of the Kirche in Not International Catholic Charitable Foundation; Rev. Hyacinthe Destivelle, staff member of the Pontifical Council for Promoting Christian Unity; Archpriest Kirill Kaleda, rector of the Church of the Russian New Martyrs and Confessors in Butovo, Moscow; and Rev. Alexander Aleshin, vice-chairman of the Synodal Department for Church Charity and Social Ministry.

Speaking of his books about Jesus Christ, Metropolitan Hilarion noted that they offer an Orthodox response to more than two centuries of development of the New Testament studies in the West.

The DECR chairman wished to the Italian readers “to discover Christ not only as a teacher of morality, but as God and Saviour.”

After the presentation Metropolitan Hilarion and those accompanying him departed for Moscow. At the Leonardo da Vinci-Fiumicino Airport the DECR chairman was seen off by Mr. Alexander Avdeyev, Ambassador Extraordinary and Plenipotentiary of Russia to the Holy See, and Rev. Jaromir Zadrapa, staff member of the Pontifical Council for Promoting Christian Unity.

During his working visit to Rome Metropolitan Hilarion of Volokolamsk met with Pope Francis and Cardinal Kurt Koch, president of the Pontifical Council for Promoting Christian Unity. Together with Cardinal Koch the Russian hierarch chaired the session of the Working Group for Cultural and Social Cooperation between the Roman Catholic Church and the Russian Orthodox Church. The DECR chairman also took part in the conference that marked the 4th anniversary of the historic meeting between Pope Francis and Patriarch Kirill in Havana on 12th February 2016.