Patriarch Kirill presides over meeting of Interreligious Council in Russia 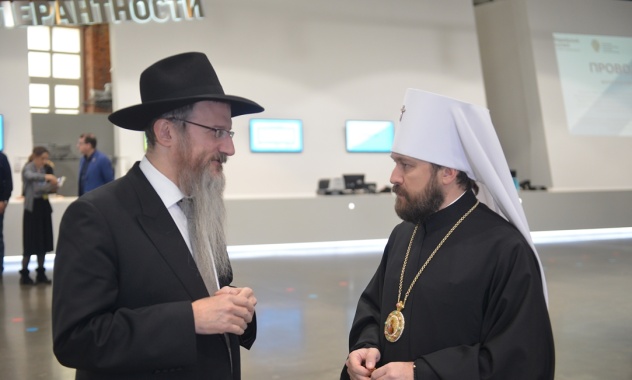 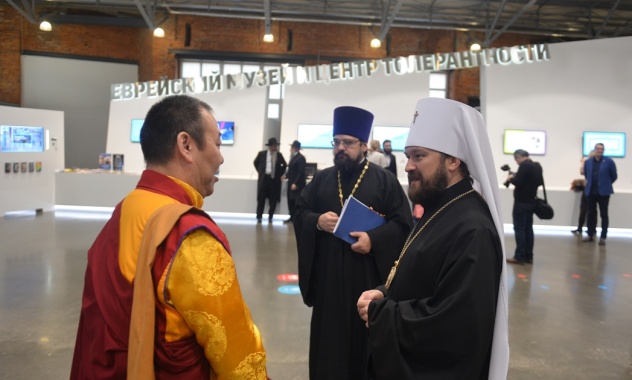 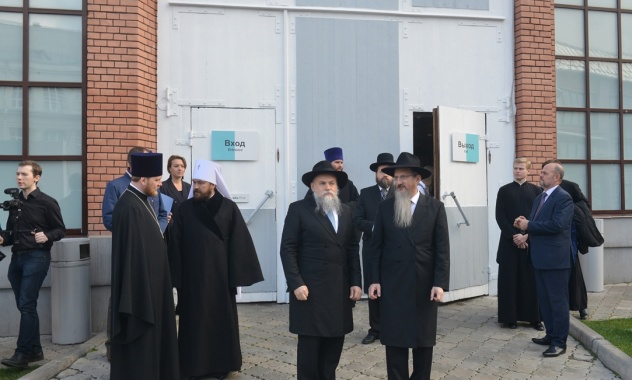 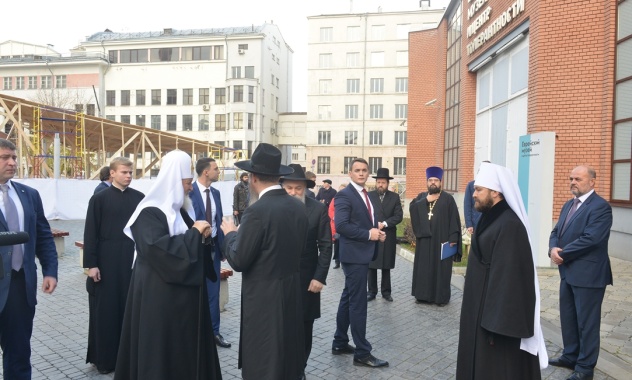 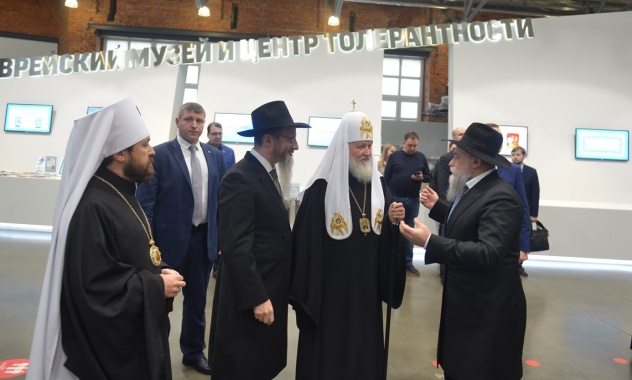 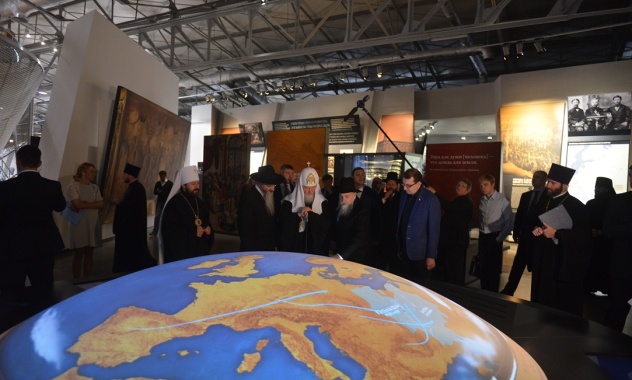 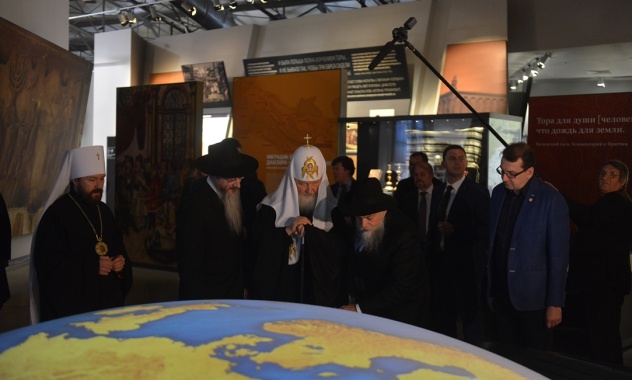 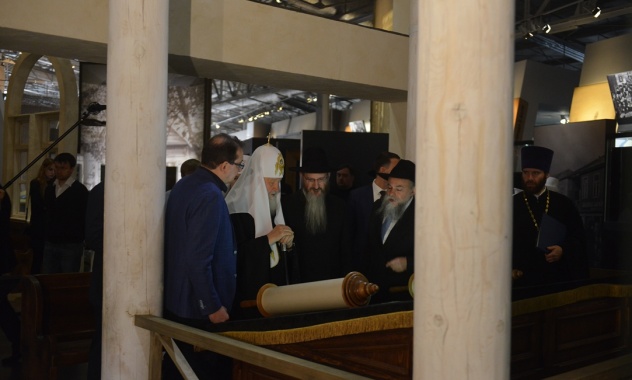 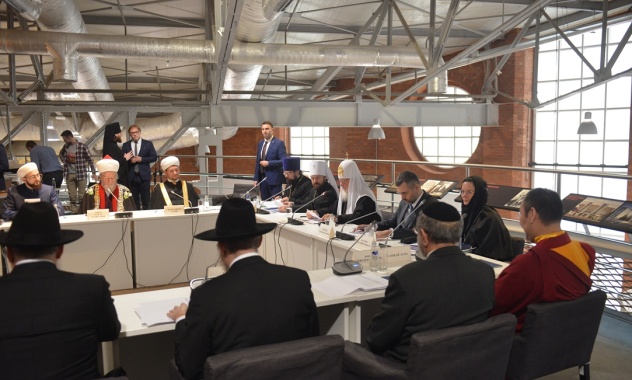 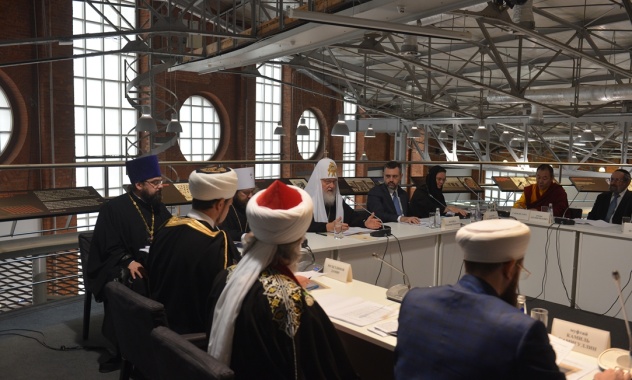 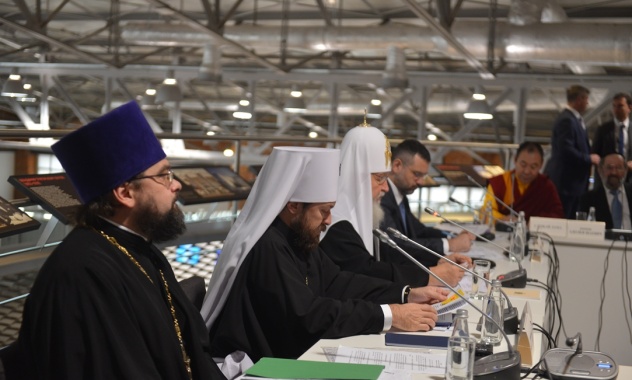 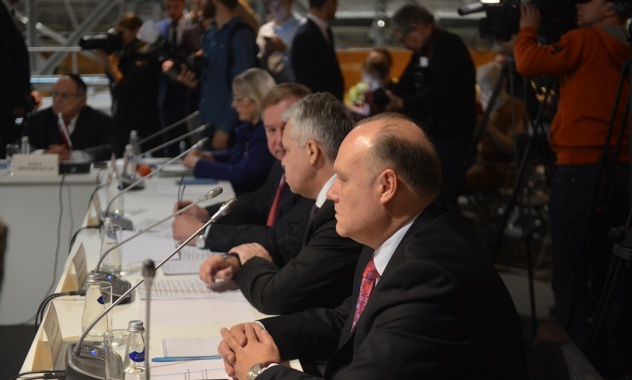 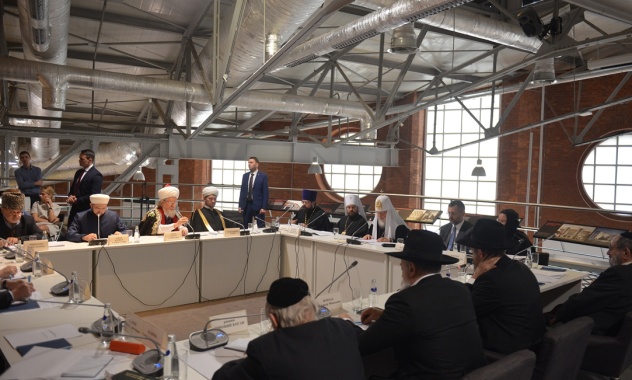 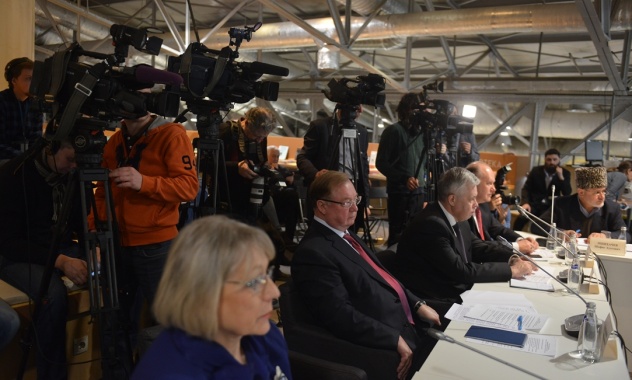 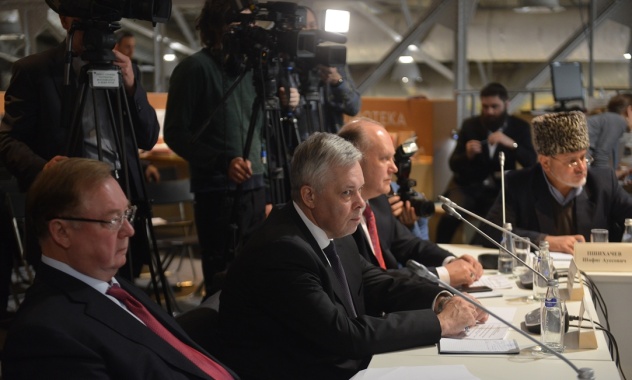 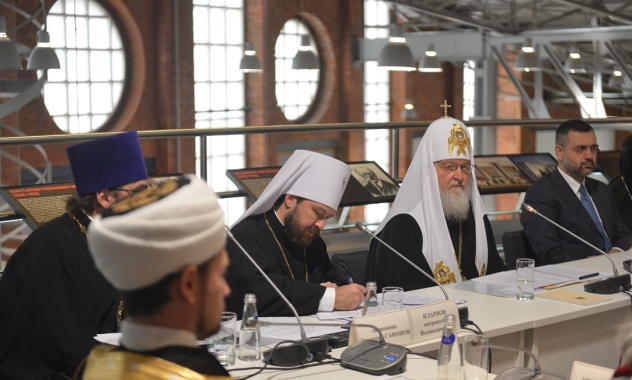 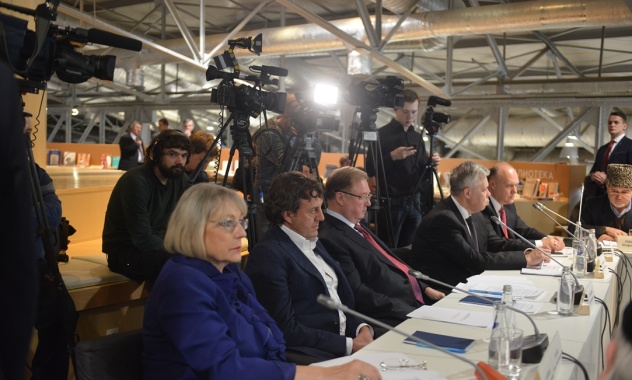 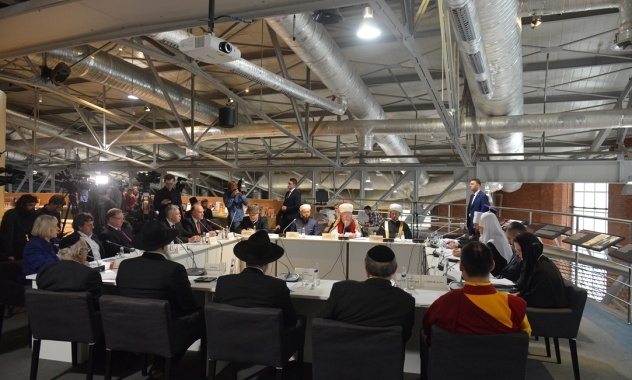 October 24, 2017 – The presidium of the Interreligious Council in Russia (ICR) met at the Jewish Museum and Tolerance Center in Moscow.

At the entrance of the museum the Primate of the Russian Orthodox Church was met by Metropolitan Hilarion of Volokolamsk, head of the Moscow Patriarchate department for external church relations (DECR), Russia’s Chief Rabbi Berel Lazar, and President of the Federation of Jewish Communities in Russia A. Boroda. Before the beginning of the meeting, the Patriarch saw the museum exposition devoted to the history and culture of the Jewish people.

After that the IRC presidium began its work under the chairmanship of Patriarch Kirill. The meeting was attended by the IRC members and their representatives including Metropolitan Hilarion of Volokolamsk, Sheikh ul-Islam Mufti Talgat Tajuddin, head of the Central Muslim Board in Russia; Russia’s Chief Rabbi Berel Lazar (Federation of Jewish Communities in Russia), Russia’s Chief Rabbi A. Shayevich (Congress of Jewish Religious Organization and Associations in Russia), Mufti Kamil Samigullin, head of the Muslim Board in the Republic of Tatarstan, Sanjay Lama, authorized representative of the Buddhist Traditional Sangha in Russia; A. Boroda, President of the Federation of Jewish Communities in Russia; Mr. Damir Mukhetdinov, first deputy chairman of the Muslim Board in the Russian Federation; Mr. Sh. Pshikhachev, authorized representative of the coordinating center of the Muslims in Northern Caucasus; and Rev. Dimitry Safonov, ICR executive secretary.

Participating in the meeting from the Russian Orthodox Church were also V. Legoida, head of the synodal department for the Church’s relations with society and mass media, and Sister Xenia (Chernega), head of the Moscow Patriarchate legal service.

The ICR Patrons Committee was represented by its chairman S. Stepashin, chairman of the Imperial Orthodox Palestine Society (IOPS), and E. Taran, vice-chairman of the committee and president of RATM Holding Company.

Mr. S. Melnikov, executive secretary of the Presidential Council for Cooperation with Religious Associations, Ms. Ye. Agapova, IOPS vice-chair, and Mr. O. Blyudov, adviser to the RATM Holding president, were present at the meeting as guests.

Patriarch Kirill’s introductory remarks were devoted to the Presidium’s draft Statement on Culture. Freedom of Creative Work and Moral Responsibility.

In his remarks, Rabbi Berel Lazar said that he saw a special symbolism in the fact that the ICR meeting took place at the Jewish Museum and Tolerance Center. He stressed that along with the idea of tolerance popularized in the museum, all the traditional confessions in Russia are also united by the common history of persecution for faith in the times of the Soviet power. ‘We all suffered and this has taught us to help each other, to endure disaster and deprivations together. And now when all the traditional confessions can freely observe their religious behests, our duty is to preserve this experience, to consolidate our ties, to defend together our eternal values – tolerance to others’ views and mutual respect, solidarity and fraternal love. Regrettably, in the present time of super-liberal education we encounter outrages in all spheres. The situation in which the art and culture today have decided that they have a right to insult the feelings of believers and their religious values cannot be called freedom. It is all-permissiveness that regrettably leads to the most terrible consequences’.

Mufti Talgat Tajuddin pointed out that freedom should be realized within the framework of public morality as it has accumulated all the diversity of relations with other people and respect for the rights of others people, ideological groups and religious communities. It is true for the freedom of creative work. He said, ‘By his creative work a person signs off each of his action and bears responsibility reflecting his special socially and morally lawful attitude to society, to humanity as a whole. It is very regretful that lately religious and national values have become an object of mockery under the pretext of perverted understanding of freedom of creative work. Such freedom of creative work is comparable to the word ‘arbitrariness’; for a person does his will without taking into consideration the norms of human common life and interests of other people including their aspiration to be free too’. Inspiration and true creativity are impossible without spiritual moral freedom, the mufti stressed, saying, ‘Spiritually and morally the source of freedom and the decisive form of freedom is the choice between good and evil’.

According to Rabbi Adolf Shayevich, public dialogue should include representatives of the most diverse viewpoints which belong to either religious traditions or those which do not claim to belong to any confession. ‘It is very important for the unity of the country, for each of us because our children are to understand where we go to, what we want and what we seek. And if in the dialogue we hand down to them the heritage which helped us to survive in incredibly hard situations, it means a bright future awaits them’.

The next speaker, Mufti Kamil Samigullin said particular, ‘In the creative and scientific milieu today the problem of relationship between freedom and creative work is often discussed. I would like to point out that freedom of creative work is a high art that helps to purify one’s soul and to liberate reason from all the shackles obstructing spiritual and material development. But! It is so only if justice, honesty and all the moral and ethical norms, which do not damage people and do not insult their values and beliefs, are observed. The freedom of creative work which does not respect spiritual and religious values and ignores the cultural and ethical traditions of society is actually a disease. A society that has reconciled with this disease is to expect an inevitable decline and stagnation, which we vividly see in the western culture bogged down as it is in a cult of the body, limitless freedom of self-expression, pleasures and lechery. We can clearly see the fruits of all this: the world highest proportion of suicides, decay of family values, increase in the number of neglected children, natural decline of the population, aging population, population crisis, etc. Therefore, if we as citizens of the Russian Federation wish to stop this pernicious tendency, which regrettably penetrating into our society as well, then we as representatives of traditional confessions, public organizations and the state, should together develop the moral aspects in our cultural development’.

Sanjay Lama said, ‘Today is the time then lust has prevailed, when feelings may be insulted. Advertising and pursuit of sub-truths – all this makes a negative influence on the public consciousness’. He spoke of the importance of faith which also presumes ‘personal and collective commitment to a certain positive awareness that makes one to devote one’s life to the service of society. We all are responsible for the nature of human responsibility, solidarity, charity and compassion’.

Mr. Damir Mukhetdinov shared his opinion, saying, ‘A provocative point inherent in many areas of creative work is appropriate only if it encourages the audience to engage in reflection and aspiration but does not split the society, does not make the existing differences even deeper’. He spoke of the importance of an artist’s awareness of his responsibility and pointed to the need of a ‘moral bar’ that an artist sets in his creative work. He also spoke about the ‘conflicts of historical memory’, which have become more frequent in the Russian society in recent time: ‘The task of religious leaders in this context is to reflect on our history from moral positions and to make efforts to consolidate society’.

Mr. Shafig Pshikhachev of the Muslin coordinating board in Northern Caucasus said that ‘many of our faithful see religiosity only in begging the Most High to give them something for themselves. At the same time, we can see little responsibility not only before the Most High but also before society and nature. A lack of responsibility leads to one’s own perception of freedom, with each, in his self-expression and art, seeking only to attract as much attention as possible. Religious leaders should put the stress on the efforts to make our faithful feel responsibility. We should cultivate responsibility in the younger generation’.

Metropolitan Hilarion of Volokolamsk spoke on the problem of relationship between freedom, morality and human rights. Noting that this topic in its various aspects was repeatedly highlighted in the ICR statements, he stressed that freedom of creative work and human rights should not come into conflict with such fundamental values as faith, veneration of shrines, love of the Motherland and her history and culture. He said that a special role in building forms of public order that preserve balance between the human rights institution and moral responsibility belongs to the state, system of moral formation, culture and mass media. ‘One of the primary tasks of the state is to ensure and support peace and justice in society. The state should not use the tools of coercion to restrict the freedom of culture and art. At the same time, the moral norms shared by most of the citizens should be taken into account in legislative acts and in forming the cultural policy’.

According to the DECR chairman, the traditional religions in Russia agree on the understanding of basic moral principles and recognition of their universal nature. ‘The ideology of moral relativism and absolutization of the sovereignty of individual rights and freedoms without moral responsibility often leads to all-permissiveness, connivance of low passions, desire to achieve one’s own welfare at the expense of others. An important task facing our religions is to bear witness to the intransient importance of moral values both for individuals and the whole society’.

‘A great contribution to the moral formation of the personality’, His Eminence said ‘can be made by arts. Coming in touch with the world of the beautiful, a person cultivates the best qualities of his own soul’. He expressed the conviction that there must be a moral idea in culture and arts, elevating human personalities and compelling them to seek good and truth. ‘Freedom of creative work can be used not for a good course but for an evil one. It can lead to the destruction of the moral nature of the individual and degradation of a society. Culture and art workers should be aware of their responsibility for the fruits of their creative work, evaluate their impact on the human mind and on the state of society’. He also pointed to the extreme danger of a situation in which sinful and immoral things are presented in mass media, culture and arts as publicly approved norm.

According to Metropolitan Hilarion, the ability to combine different value systems in harmony is the most important factor of supporting social stability and accord in today’s multicultural societies. ‘One of the factors hampering a fruitful dialogue between bearers of religious and secular consciousness today, in my view, is the low level of religious literacy in the population, the existence of many errors, false stereotypes and even ignorance in religious matters. I believe that this obstacle can be overcome through the development of theological education and science in our country’. His Eminence informed the meeting about the recent steps made to assert theology in the educational space in Russia.

The meeting summed up its work in a Statement of the Interreligious Council in Russia on Culture, Freedom of Creative Work and Moral Responsibility in Russia.