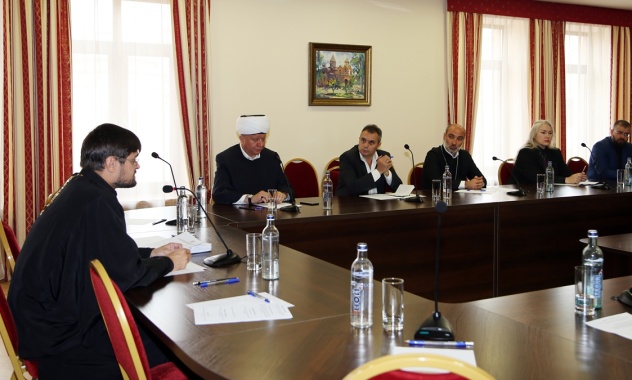 August 30, 2017 – the interreligious working group for aid to the Syrian population under the Presidential Council for Cooperation with Religious Association met for its regular session at the Moscow residence of the Armenian Apostolic Church’s Diocese of Russia and Novo-Nakhichevan.

The meeting was attended by Hieromonk Stephan (Igumnov), leader of the group; Mr. A. Melnikov, executive secretary of the Presidential Council for Cooperation with Religious Associations; Albir-Khazrat Krganov, chairman of the Muslim Assembly in Russia; Rev. Gevorg Vardanian, representative of the Armenian Apostolic Church’s diocese of Russia and Novo-Nakhichevan; Bishop K. Bendas, chancellor of the Russian Union of Christian of the Evangelical Faith; A. Surovtsev, head of the directorate for work with believing servicemen in the Russian Armed Forces under the Chief Directorate for Work with Personnel of the Russian Armed Forces; A. Rudakov, deputy head of the Middle East and North Africa department of the Russian Ministry of Foreign Affairs; M. Mirny, Presidential Directorate for Domestic Policy department for cooperation with religious organizations; Rev. Alexander Alyokin, deputy head of the Russian Orthodox Church Synodal Department for Church Charity and Social Service; S. Baidakov, head of the Moscow branch of the Imperial Orthodox Palestine Society; N. Osin, representative of the Conference of Catholic Bishops in Russia; S. Akopian, representative of the Armenian Apostolic Church diocese of the Southern Russia; Ms. N. Kuskova, co-chair of the Committee for Solidarity with the Peoples of Libya and Syria; Ms. A. Averkova, Committee for Solidarity with the Peoples of Libya and Syria.

The meeting summed up the two actions for aid to the suffering population in Syria, which took place on June 22-24 and August 22-24, 2017, and unanimously noted the progress made in the development of the project. The aid collected by Russian religious organizations was given to people in refugee camps near Latakia, in Aleppo, Homs and in the de-escalation zone close to it. A part of the supply was added to the aid brought by the Russian center for reconciliation of the warring parties to the city of El-Kamysh in northeastern Syria for the first time. The aid consisted mainly of foodstuffs and medicines. However, during the second action, children in Aleppo could receive toys and school stationary on the eve of a new academic year.

The meeting approved the choice of the way in which the humanitarian aid is distributed in Syria under this project, namely, through the Russian Center of Reconciliation of Warring Parties. In this way it reaches the targeted people in need and distributed regardless of their confession or other affiliation.

Representative of religious communities in the group expressed great gratitude for the assistance in preparing and implementing the action to the Presidential Directorate for Domestic Policy, the Russian Ministry of Defense and Ministry of Foreign Affairs.

The meeting considered it important to continue the work for aid to the suffering population of Syria, who stand in an acute need of it. Representatives of Christian and Muslim communities stated that they continued raising funds for these aims, which will be then used together in carrying out further actions.

Hieromonk Stephan noted that His Holiness Patriarch Kirill of Moscow and All Russia personally coordinated the development of the project, reminding the meeting that the already collected aid was based on the contribution made on behalf of His Holiness.

The group outlined prospect for broadening its work in coordination with Syrian religious communities, as it was discussed during the joint round-table conference held on June 23, 2017, in Beirut.