News > DECR Chairman > Sermons > Metropolitan Hilarion: the Church in his world is called to bear witness to God’s truth

Metropolitan Hilarion: the Church in his world is called to bear witness to God’s truth 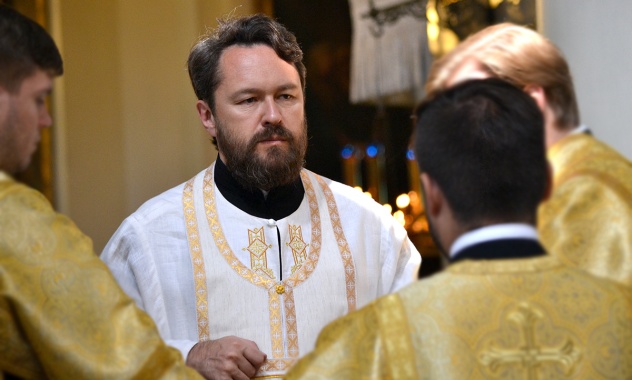 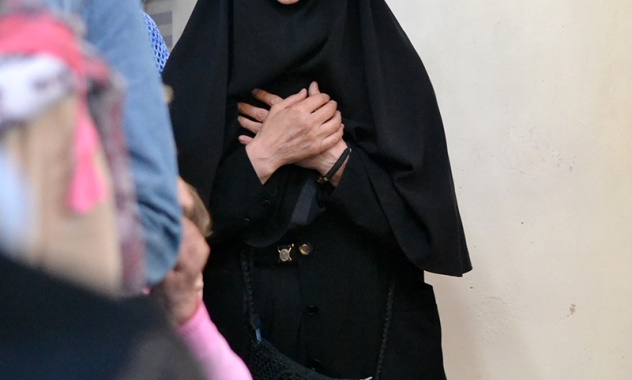 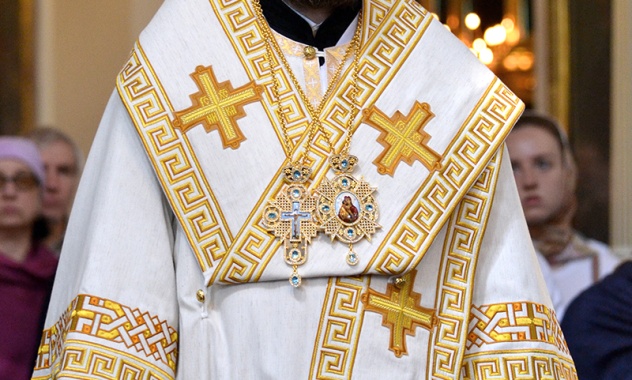 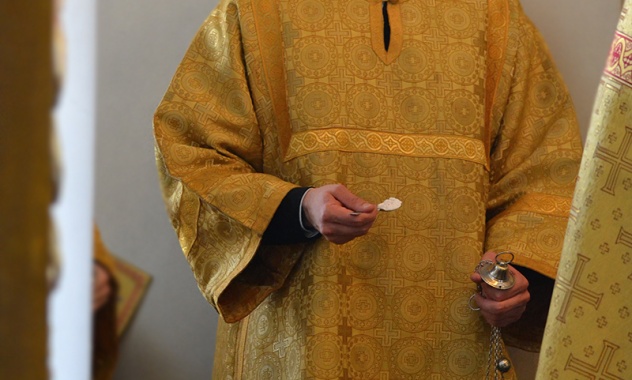 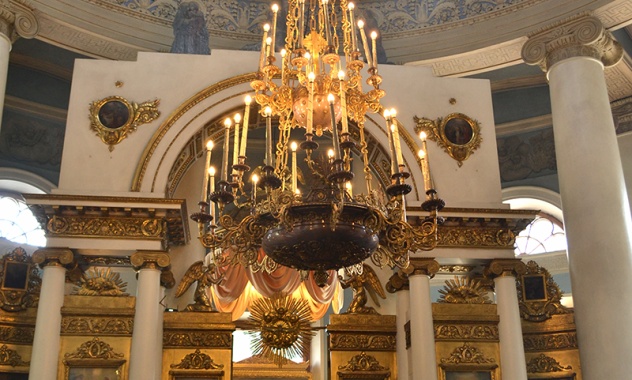 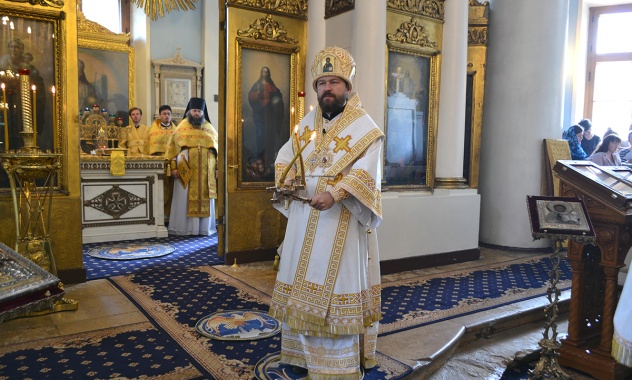 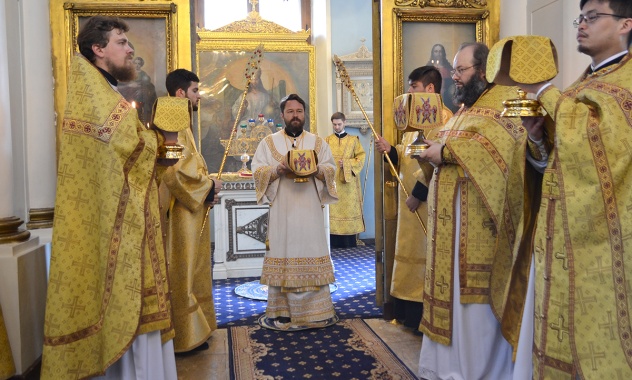 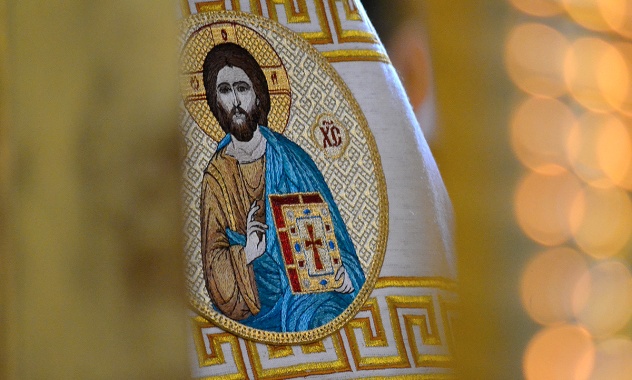 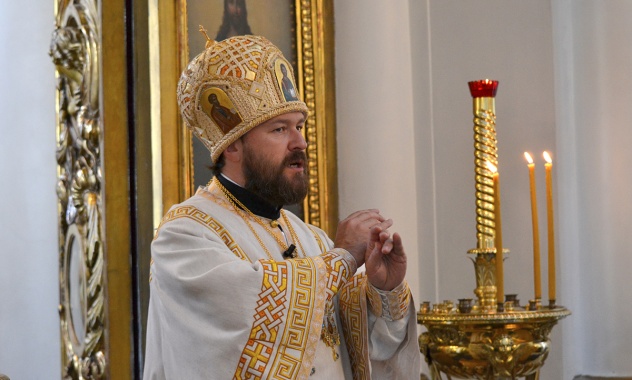 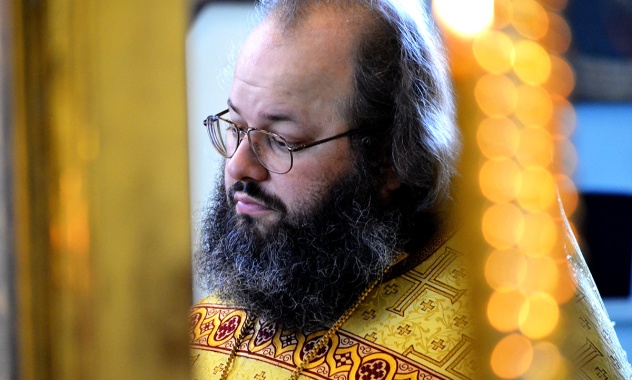 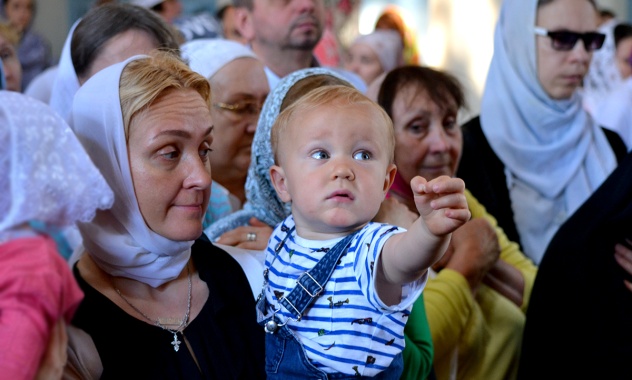 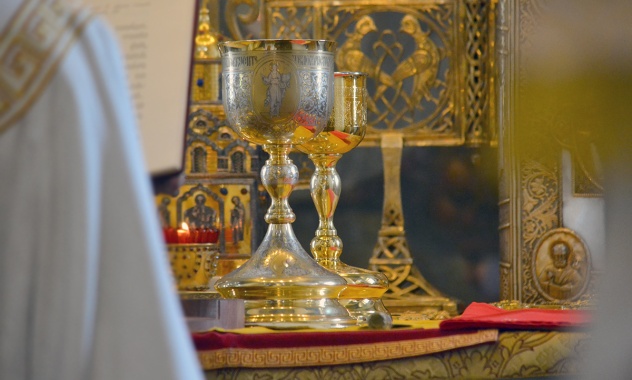 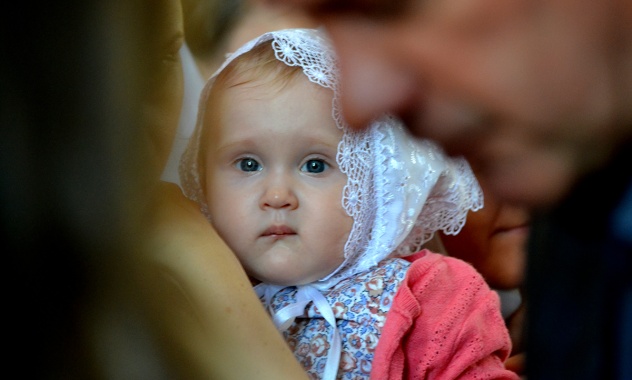 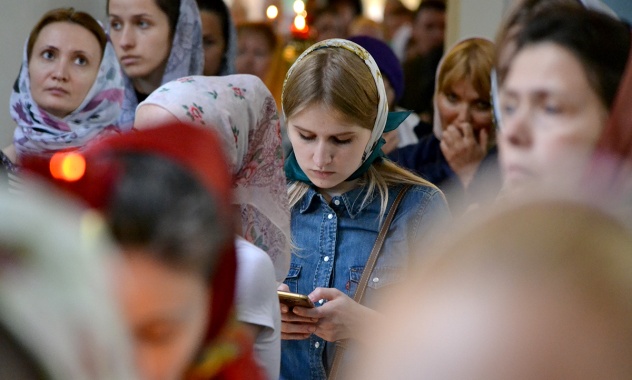 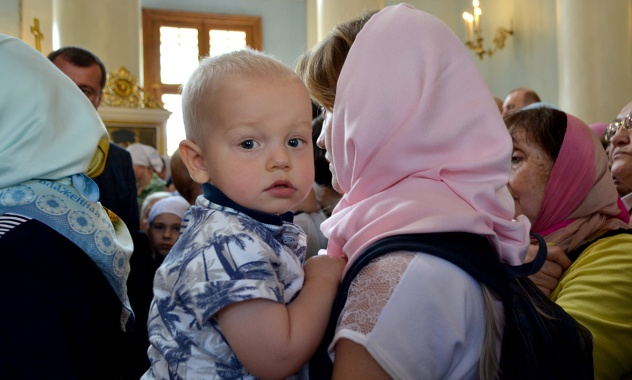 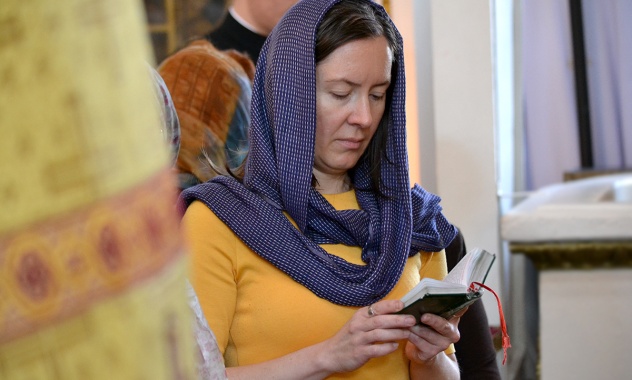 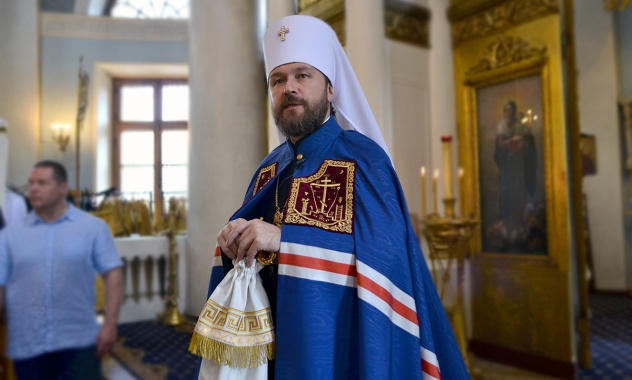 On July 16, 2017, the commemoration day of St. Philip the Wonderworker, Metropolitan of Moscow and All Russia, the chairman of the Moscow Patriarchate department for external church relations, DECR) Metropolitan Hilarion of Volokolamsk celebrated the Divine Liturgy at the Moscow church of Our Lady the Joy to All the Afflicted-in-Bolshaya-Ordynka. The archpastor was assisted by the clergy of the church.

After the Prayer of Fervent Supplication, Metropolitan Hilarion lifted up a prayer for peace in Ukraine.

After the service, His Eminence addressed himself to the worshippers with a homily:

This Sunday coincides with the commemoration day of the Holy Martyr Philip, Metropolitan of Moscow. He came from the boyar family of the Kolychevys. Until he turned 30, he lived an ordinary mundane life, though, as his Life narrates, he loved the church of God from his childhood, loved to read Holy Scriptures and was a devout Orthodox Christian. But when he was 30, he once came to a church of God and heard the words of our Lord Jesus Christ:  “No one can serve two masters” (Mt. 6:24) and these words made his think over the meaning of his own life.

He left everything behind, changed to a simple peasant’s clothes and set off for the Solovki Monastery, one of the remotest monasteries in Holy Rus’ in which he was to fulfil hard tasks for nine years without revealing who he was and where he came from, what was his origin and kinship. With time, having seen in him a man of God, the brethren elected him as presbyter and father superior. And then he got down to the task of putting the monastery in good order, not only spiritually but also materially. He, as his life story narrates, united the lakes by channels, drained the swamps and built two cathedrals in the monastery so that it might look properly and the monastic community might live under conditions it deserved.

It was under St. Philip that the Solovki Monastery became a center of monastic life and remained so for several centuries up to its closure after the 1917 October Revolution. At some point the saint to be was summoned to Moscow and the Tsar Ivan the Terrible elected him to the Moscow metropolitan see. Philip did not want to assume such a service, for his heart disliked it: his soul sought a reclusive life and monkhood. But such was the divine providence and such was the will of the tsar and for this reason Philip humbly bowed down under the hands of bishops who elevated him to the rank of bishop and metropolitan.

We know what kind of man Ivan the Terrible was. Today there are different views of his rule, but historians have left us a terrifying evidence of the way in which his man ruled Rus’. First his rule was good and successful but later he initiated a policy of repression against various people, especially those who were dissatisfied with his rule. He created oprichnina, a non-official ‘police’ who rode about the country catching those who fell afoul of the tsar and savagely punishing them. Oprichniks, who wore black monastic-like clothes, made the whole Holy Rus’ creep. The tsar himself was increasingly turning from an autocrat to a despot who would move away from the capital for some time to create a pseudo-monastic community around him.

All this certainly gave the Metropolitan of Moscow strong anxiety and deep grief. He repeatedly tried to admonish the tsar in personal talks but the tsar still did what he considered necessary to do. Once, on the Sunday of the Veneration of the Cross, the tsar came to the Cathedral of the Assumption in the Moscow Kremlin while the metropolitan was standing on his metropolitan’s pulpit. According to tradition, Ivan the Terrible came up to him for a blessing but the metropolitan refused to give it. He stood looking at an icon of our Saviour as if he did not notice the tsar. So the boyar said to him, “Don’t you see? The Tsar is asking for your blessing”. And then the saint turned to the tsar and said, “Here we offer the bloodless sacrifice to God while the innocent blood of Christians is being spilt behind the sanctuary”.

The metropolitan’s condemnation infuriated the tsar. He nursed a grievance and soon found a pretext for punishing him. When on the St. Michael Day the saint celebrated at the Kremlin Cathedral of the Assumption, oprichniks burst into the cathedral, tore off his primatial vestments and, before the eyes of all the people, pushed him from the church and confined him. But it seemed not enough to the despotic tsar and after a while he sent his optichnik Maliuta Skuratov to do away with the saint. And St. Philip, who was confined to the Otroch Monastery, was strangled by this oprichnik at the tsar’s order.

This was the terrible fate of a man who, against his will, was installed to a high church service only to become a victim of the tsar’s wrath. But the Church glorifies him as one of the great saints of Holy Rus’ who was not afraid either of the civil authorities or the tsar’s power, since for him above all was always the truth of God to which he bore witness by both his primatial service and preaching.

We know from history that there were various forms of rule: monarchies and republics, parliamentary and presidential, and to these days these various forms of governance co-exist in our world. Sometimes people would argue about which form of governance is better. What is better – to have an anointed tsar with power to rule given by the Church or a president elected by the people and empowered to rule by the people? Or some other form?

However, history has shown that in any form of governance there were both wise and unwise rulers. Some used their power given by God or the people for the good of the people, while others turned their autocracy into despotism. And the Church has always been loyal to state power, even in the years when the power was a persecutor of the Church as was the case in the Roman Empire when the apostle called Christians, “Fear God, honor the emperor” (1 Pet. 2:17), and the emperor at that time was indeed a heathen and persecutor of the Christian Church. Such was also the case in the Soviet time when the power was again a persecutor of the Church and the Church did not come out against it.

In history however there were moments when the Church, by the voice of her saints, had to witness that power committed unlawful acts. It was precisely at such times that the Lord raised such people as St. Philip the Metropolitan of Moscow who were not afraid of the authorities, were not afraid of death in bearing witness to God’s truth, as prophets did it in Old Testament times. And the Church has glorified these people for the feat of confession, for they tread in the steps of our Lord Jesus Christ, emulating Him in their standing for the truth.

When we read the Gospel we often ask ourselves: Why was the Lord Jesus Christ so steadfast in His polemic with the Pharisees? Isn’t it possible to find a compromise and come to an agreement with them? But the Lord did not at all come to this world to make compromises with the prince of this age. And when the devil tempted Him in the desert He rejected all the three temptations.

Similarly the Church is called to bear witness in this world to God’s truth. So long as power does not speak against this truth, so long as it does not force people to commit anti-Christian acts and actions, the Church remains loyal to power. And the Church does not evaluate which power or a form of governance is better or which party or ruler is to be followed – all this lies on the conscience of the people who chose the ruler or on the divine providence if the ruler is not chosen by the people. As for the witness to God’s truth, the Church should always be on the side of this truth. And there always be people who bear witness to this truth even if the state power dislikes it.

Let us pray to St. Philip the Wonderworker, Metropolitan of Moscow, that through his intercession the Lord may preserve our Holy Rus’ for all the ensuing times, that God’s truth, through the mouths of saints and the Church, may always be proclaimed in our Motherland and our rulers chosen by the people’s will may always follow it. Amen’.