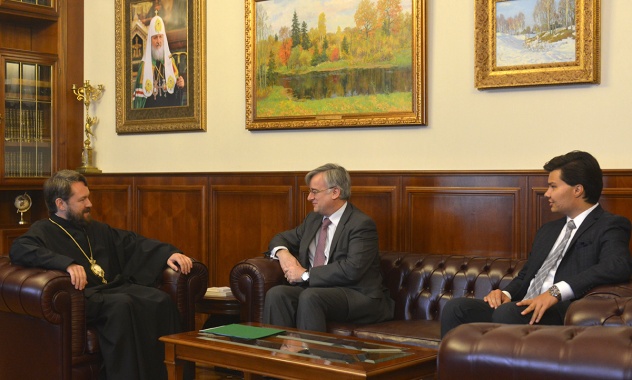 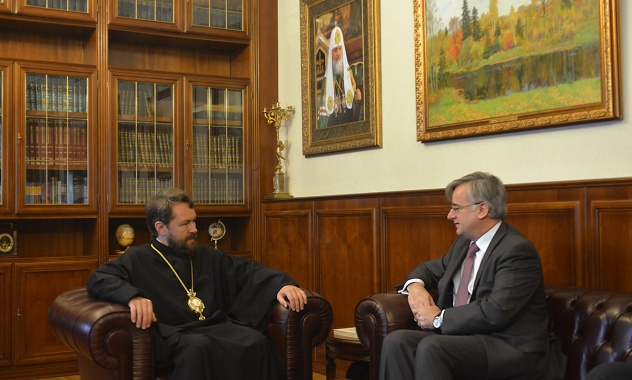 On 10 July 2017, Metropolitan Hilarion of Volokolamsk, chairman of the Moscow Patriarchate’s Department for External Church Relations, met with H.E. Mr. Ignacio Ibañez Rubio, newly appointed Ambassador Extraordinary and Plenipotentiary of the Kingdom of Spain to the Russian Federation. They were joined in the meeting which took place at the DECR premises, by Mr. Miguel Palacio, a staff member of the DECR Secretariat for Far-Abroad Countries.

Metropolitan Hilarion noted a high level of cooperation between the Department for External Church Relations and the Spanish diplomatic mission in Moscow and told his guest about the situation of the Russian Orthodox Church in Spain, where parish life has intensified.

Mr. Rubio thanked the Russian hierarch for the meeting and expressed his willingness to promote the relationships with the Russian Orthodox Church.

The participants in the meeting discussed the current inter-Christian relations, inter-religious dialogue in Russia, Spain and other EU countries, as well as other issues of mutual interest.