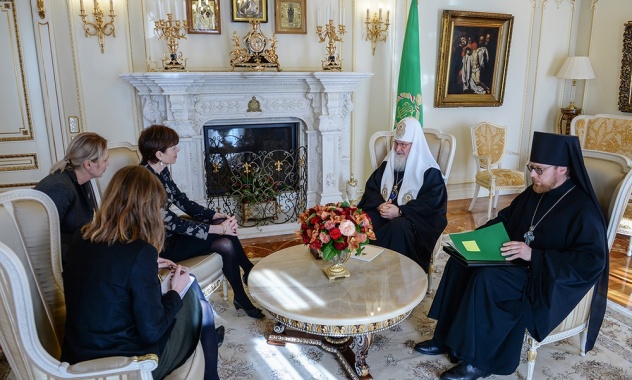 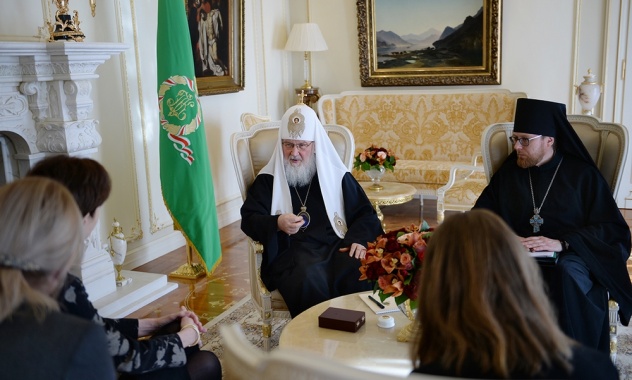 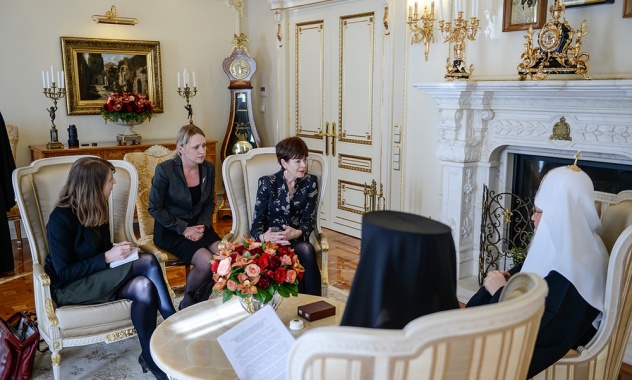 On 10 March 2017, at the Patriarchal residence in St Daniel’s Monastery in Moscow, His Holiness Patriarch Kirill of Moscow and All Russia met with H.E. Ms Renée Jones-Bos, Ambassador Extraordinary and Plenipotentiary of the Kingdom of the Netherlands to the Russian Federation.

They were joined in the meeting by Archimandrite Philaret (Bulekov), vice-chairman of the Moscow Patriarchate’s Department for External Church Relations, and Ms Miriam Otto, First Secretary of the Embassy of the Netherlands.

Greeting the guest, His Holiness Patriarch Kirill noted the traditionally good relations between the Russian Orthodox Church and the diplomatic mission of the Kingdom of the Netherlands in Moscow and said in particular, “The Church is an institution that brings together not only people of different views, but also different epochs… Unlike politicians who focus upon the pressing problems, the Church is concerned with, among other things, the relations between countries and peoples seen in the historical context as well. In the history of our nations and states there were many positive moments of great significance. First of all, it was associated with the activities of Emperor Peter I, who was a reformer and had a special liking for your country and your people. Following his reforms, many people from your country used to visit Russia and even live here, holding different senior posts and having influence on the development of the Russian Empire.”

His Holiness Patriarch Kirill told the guest about his numerous visits to the Netherlands and about his meetings with the country’s statesmen, as well as with scholars and religious leaders. “We have always had a constructive dialogue,” the Primate of the Russian Church added.

As Patriarch Kirill emphasized, the interreligious contacts are to continue to play their important role in the cooperation between the nations, in particular, between Russia and the Western Europe. “I recall the period of the Cold War when the relations between the Soviet Union and the Western world were even more complicated than the relations between our countries today. At the time the ecumenical ties played a very important role; we managed to reach agreements on very significant issues in the dialogue with Christians of the United States and the Western Europe.”

His Holiness noted that the Russian Orthodox Church would continue to make efforts to promote good relations and cultural ties between the two countries in spite of what is going on at the political level.

H.E. Ms Renée Jones-Bos thanked the Primate of the Russian Orthodox Church for the meeting and noted that despite some tensions in the political sphere, the Dutch companies continue to work in Russia and the cultural cooperation develops.

Among the topics raised by the diplomat were the activities of the diocese of the Russian Orthodox Church in the Kingdom of the Netherlands.

Photo by the Patriarchal Press Service