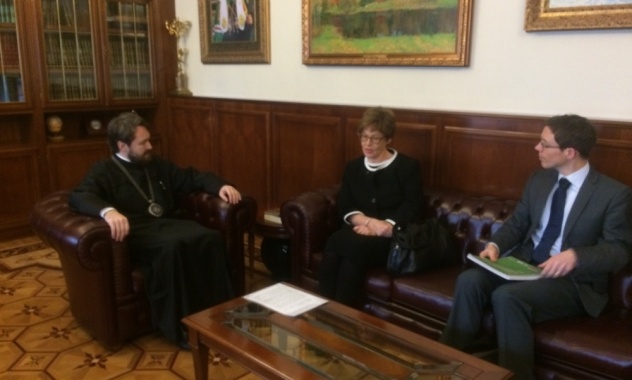 On 9 March 2017, Metropolitan Hilarion of Volokolamsk, chairman of the Moscow Patriarchate’s Department for External Church Relations (DECR), met with Dr. Cornelia Füllkrug-Weitzel, head of the Protestant Agency for Diakonia and Development (PADD) in Germany, who has arrived in Russia to look at the social service projects carried out by the Russian Orthodox Church. She will visit the Synodal Department for church charity and social ministry, the Martha and Mary community, the central clinical hospital named after St Alexius Metropolitan of Moscow, the St. Demetrius sisterhood, and the St. Tikhon’s Orthodox Universities for Humanities.

Taking part in the meeting also were Christopher Selbach, head of the ‘Bread for the World’ agency’s department; hieromonk Stefan (Igumnov), DECR secretary for inter-Christian relations, and Ms Margarita Nelyubova of the same secretariat.

Metropolitan Hilarion talked about the years-long cooperation between the Russian Orthodox Church and diakonia agencies in Germany. The cooperation actively developed in the 1990s and early 2000s. Meetings of His Holiness Patriarch Alexy II and the DECR chairman Metropolitan Kirill of Smolensk and Kaliningrad (now His Holiness Patriarch Kirill of Moscow and All Russia) with Jürgen Gode, president of the Diakonia agency of the Evangelical Church in German, were very important. From the early 1990s to 2012 many important projects were implemented, for instance in the fields of education, palliative care, HIV/AIDS prevention, and aid to the victims in emergency situations. This kind of cooperation helped to make this work done in many diocese of the Russian Orthodox Church even more active.

The DECR chairman added that the Russian Orthodox Church paid great attention to the development of various aspects of diakonia and to the education of church social workers. Many educations programmes were developed, many methodological books were published, and exchange of experience often takes place. Qualitative and quantitative growth in church diakonia was evident in Russia in the last two decades.

Dr. Füllkrug-Weitzel noted the importance of developing joint projects of the diakonia agencies in Germany and the Moscow Patriarchate and reminded the participants in the meeting that the subject had been discussed on the sidelines of the conference of the Russian Orthodox Church and the Evangelical Church in Germany held in Munich in December 2015.

Also discussed at the meeting were concrete aspects of cooperation planned to be developed in the coming years.