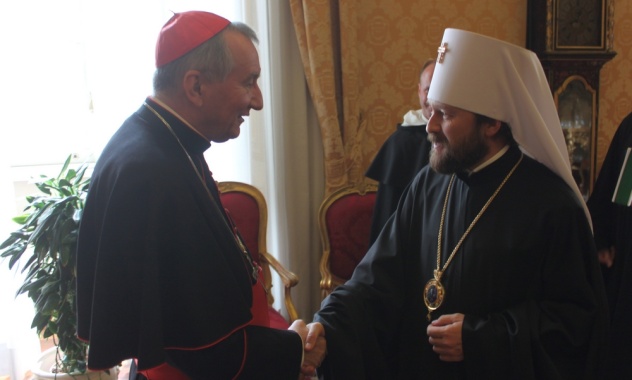 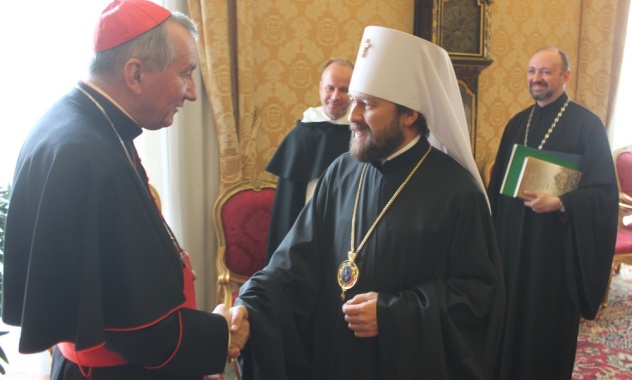 On 15 September 2016, Metropolitan Hilarion of Volokolamsk, chairman of the Moscow Patriarchate’s Department for External Church Relations, met with Pietro Cardinal Parolin, Secretary of State of the Holy See. Discussed at the meeting, which took place in the Vatican, were some topical issues of international politics.

The participants focused on the situation of Christians in the Middle East and North Africa suffering at the hands of terrorists. Both Metropolitan Hilarion and Cardinal Pietro Parolin consider the situation difficult, but hope that the negotiations between high-ranking officials of Russia and the USA will yield their good fruit. The representatives of the Russian Orthodox and the Roman Catholic Churches noted with satisfaction that some practical steps had been made to implement the decisions taken during the meeting of Patriarch Kirill of Moscow and All Russia and Pope Francis of Rome in Havana this February. For instance, the DECR chairman and the Vatican’s Secretary of State emphasized the importance of the visit of representatives of the two Churches to Lebanon and Syria in April 2016, to hold consultations with local Christian communities with the view of setting up joint humanitarian projects.

Speaking about the situation in Ukraine, the participants in the meeting noted the efforts of the two Churches to re-establish peace in the country. On the occasion of the 25th anniversary of Ukraine’s Independence, both His Holiness Patriarch Kirill and His Holiness Pope Francis called for reconciliation in the longsuffering Ukrainian land. Metropolitan Hilarion and Cardinal Pietro Parolin agreed that it was necessary to continue the peacemaking efforts aimed at overcoming the conflict, in compliance with the Joint Declaration signed in Havana inviting “Churches in Ukraine to work towards social harmony” (par. 26).