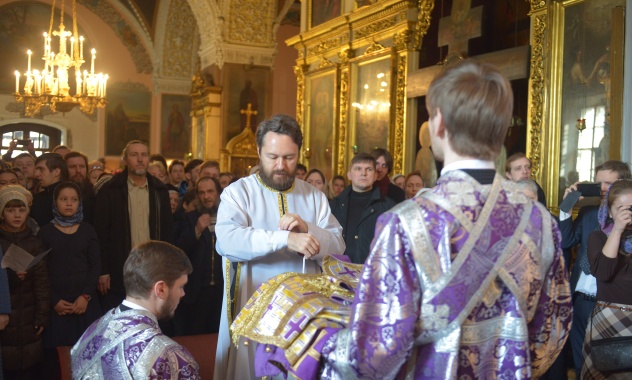 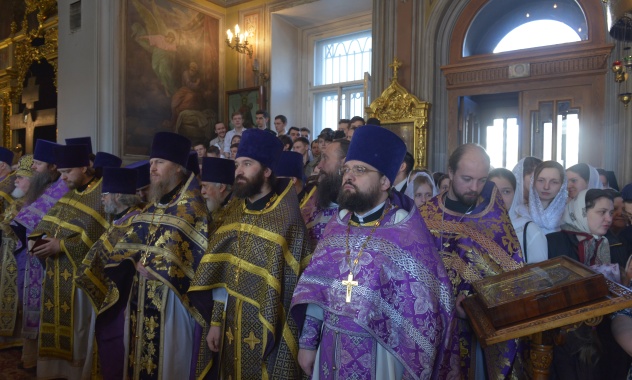 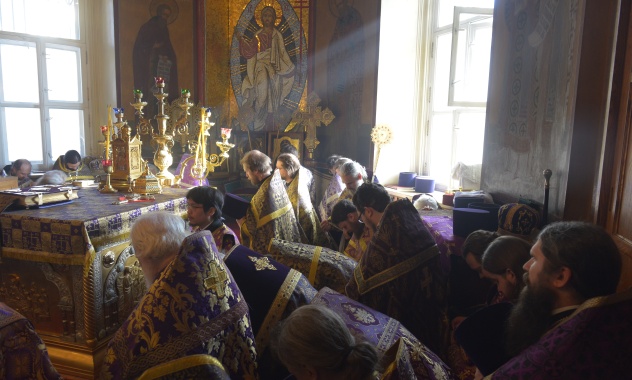 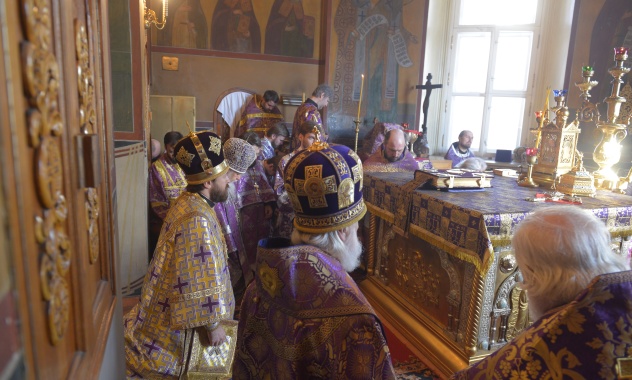 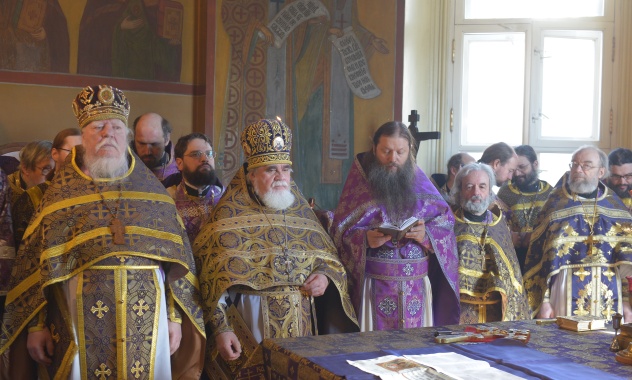 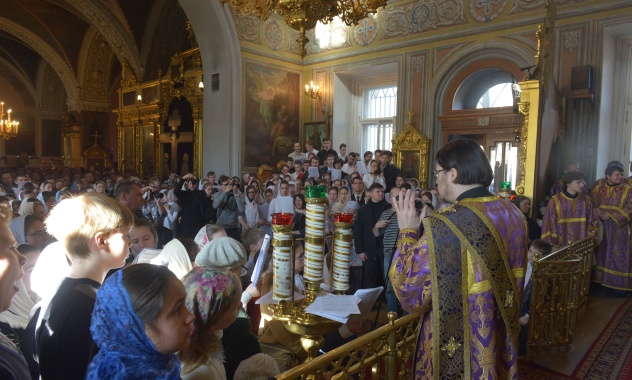 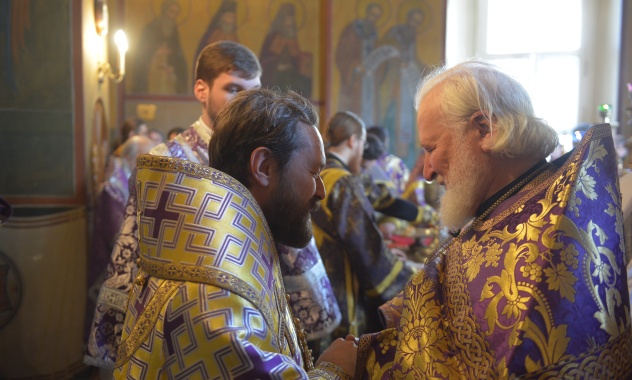 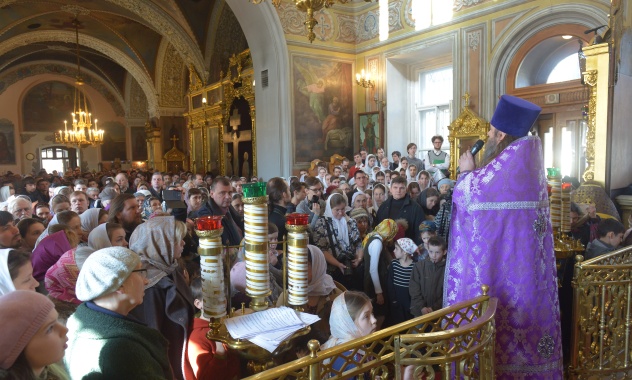 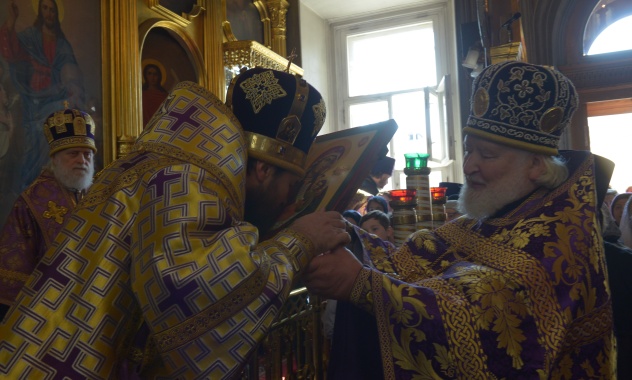 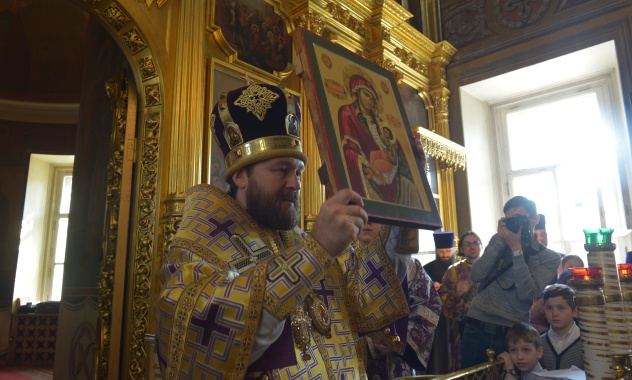 On March 28, 2016, Metropolitan Hilarion of Volokolamsk, head of the Moscow Patriarchate department for external church relations (DECR) and rector of the Ss Cyril and Methodius Institute of Post-Graduate Studies (CMI), celebrated the Liturgy of the Presanctified Gifts at the St. Nicholas Church-at-Kuznetsky Sloboda.

That day, the rector of the church, Archpriest Vladimir Vorobyev, rector of the St. Tikhon Orthodox University of the Humanities (STOUH), was 75.

Singing during the liturgy was the massed choir of the STOUH and the St. Peter Classical School.

After the Prayer of Fervent Supplication, Metropolitan Hilarion lifted up a prayer for peace in Ukraine.

In his address to the congregation after the service, Metropolitan Hilarion said:

Very Reverend Father Vladimir, in whose honour we have assembled in his holy church today,

‘I am especially delighted to celebrate today in this old Moscow church with the blessing of His Holiness Patriarch Kirill of Moscow and All Russia and on his behalf and on behalf of all who have gathered here today to offer you, dear Father Vladimir, our birthday greetings.

‘Your life is an example for very many. You are a graduate of a secular university, but you have chosen the path of service of the Church and have carried out the priestly service for long decades now. You have become a good pastor for lots and lots of people. You have become a teacher and mentor for our Orthodox students.

‘As we stand in the overcrowded church, we hear two university choirs singing during the liturgy; we see an assembly of clergy numbering 48, and all these pastors and deacons are either your fellow pastors and colleagues or your students and pupils.

‘It is very gratifying that you mark your 75th birthday being in excellent shape and with the strength to carry out not only pastoral but also rector’s service, which places on you a great responsibility and numerous obligations.

‘I remember very well how the St. Tikhon’s Orthodox University of the Humanities was developing. It began with pastoral-theological courses, which took shelter in various lecture rooms of others because there were no such of its own. I remember how we read lectures in Moscow University, which generously offered its lecture halls to the professors and students of the university, which was called St. Tikhon’s Institute at that time.

‘I was a witness to how the St. Tikhon Institute and later University broadened its work, expanded and occupied new facilities. Perhaps, the culmination of this process can be seen in the recent blessing of the historical building at Likhov Pereulok, where the Local Council, which elected His Holiness Patriarch Tikhon to the Patriarchal throne, took place. And it was certainly not accidental that in the early 90s the name of St. Tikhon was given to the developing Orthodox institute.

‘However, any one could hardly imagine at that time what a great scale this good initiative would reach. One could hardly imagine that thousands and thousands students would go through the university and receive their graduate certificates and that – thanks to your selfless work as rector and that of your helpers – a tremendous community of people would be formed for taking to the world the word of Christ and doing it with responsibility and competence.

‘The time when the St. Tikhon University was created was a period of deep crisis in our country. It did not seem to be the best time for initiating something big, but you were not stopped by economic and financial difficulties we all encountered at that time. You daringly undertook this good initiative and today you can, as the prophet said, see the fruit of your suffering and be satisfied (cf. Is. 53:11).

‘The pastor’s heart, however, never rests and you have never rested on your laurels. I can see how selfless you work today to educate our Orthodox students, to build this parish, to strengthen the foundations of family life in our society, in which the very idea of family has been regrettably distorted under the influence of secular ideology. You are doing much to make theology present not only in the ecclesial but also secular educational space, making a weighty contribution to raising our theological education to a higher level.

‘I can also remember that His Holiness Patriarch Kirill in this youth dreamt of a possibility to receive education abroad and that Metropolitan Nikodim told him, a seminarian at that time, ‘You will study in Oxford’. But later, when he graduated from the academy, Metropolitan Nikodim said, ‘The next generation will study in Oxford’. I belong precisely to the generation who finished their studies in Oxford. However, some time has elapsed since and a new generation has emerged, who no longer have to study there because we have created an educational space of our own on our home soil, and Oxford may even envy us in some respects. I do not remember anyone in Oxford ever seeing theological students celebrating the Divine Liturgy together with their rector and singing together the praise to God.

‘True, the western science has achieved much in studies of Holy Scriptures and ancient texts, but has also made many mistakes. Today we have an opportunity for using in the Orthodox scholarship all that our predecessors accumulated on the home soil while making the critical assessment of achievements accumulated by the western theological scholarship. It is the time to build on our home soil a system of theological education equal to the best western models. I believe, with God’s help we have already built this system and now we should perfect it. In the process of building and renewing our system of theological education, a great role, along with our theological schools, is played by the St. Tikhon Orthodox University of the Humanities.

‘Dear Father Vladimir, on this auspicious day I would like to wish you good health, long life, fortitude and courage.  I wish that for long years you may preserve your good spirits and ability to guide such an enormous collective as the St. Tikhon Orthodox University’.

In his turn, the rector of the St. Tikhon University thanked His Holiness Patriarch Kirill and all the participants in the celebration.

Addressing Metropolitan Hilarion, he said in particular, ‘Thank you for your words, for you wonderful contribution to the life of the Church and the life of our education system, for leading the struggle for teaching theology in universities. Thank you for todays’ beautiful Liturgy, for the love, which is the main driving force in our life’.

As a commemorative gift, he presented Metropolitan Hilarion with an icon of the Most Holy Mother of God ‘Assuage My Sorrow’, saying, ‘God grant that, through the intercession of the Mother of God, many sorrows, which accompany every important task, be assuaged so that God’s help may accompany you in all your good deeds, in your toil for the benefit of the Orthodox Church’.