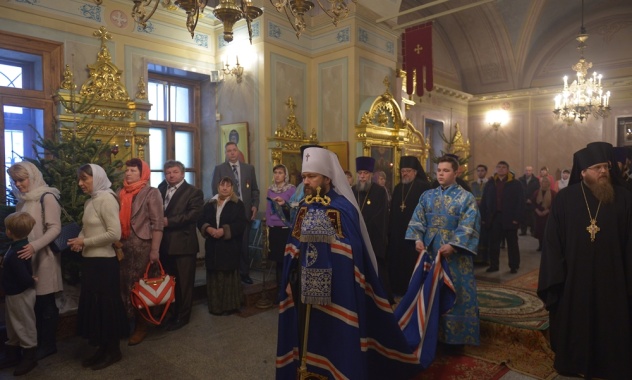 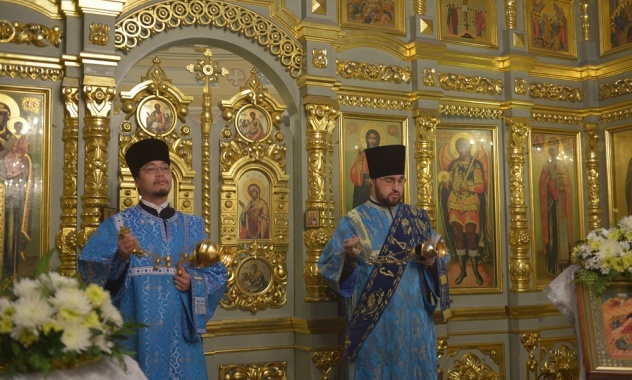 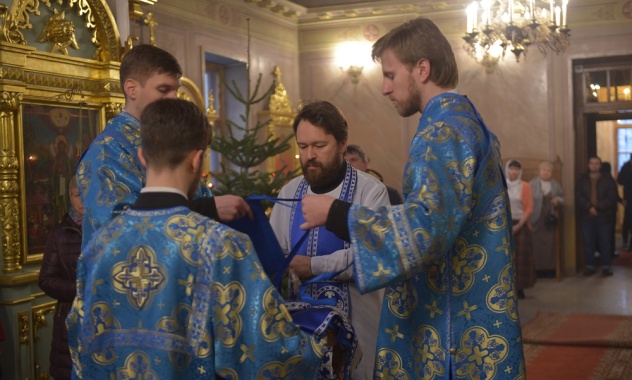 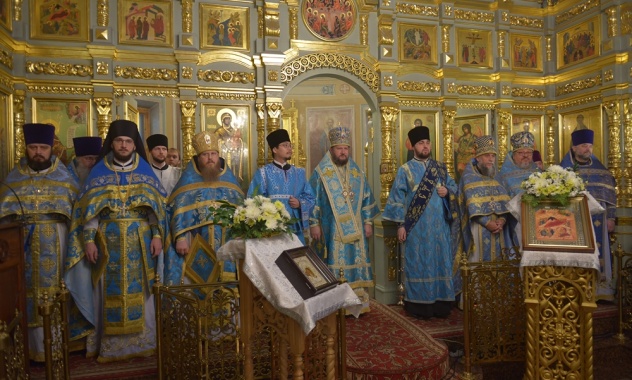 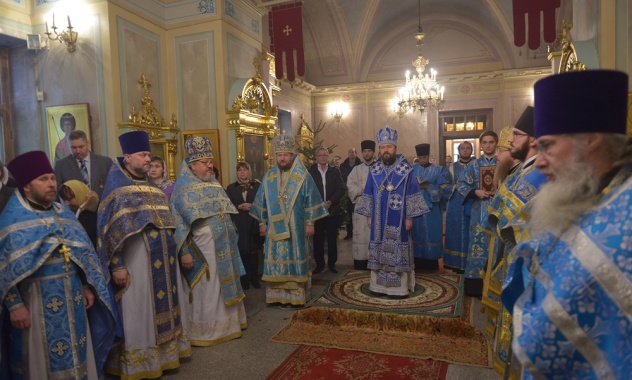 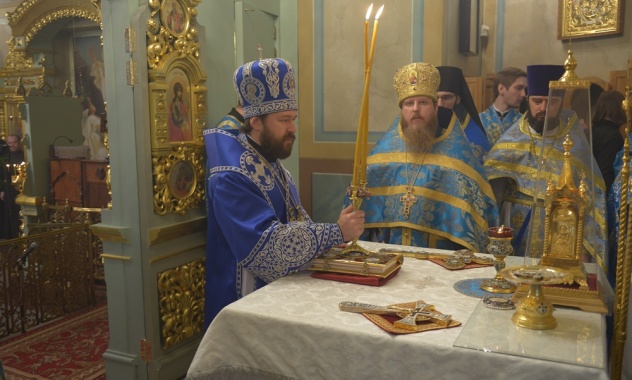 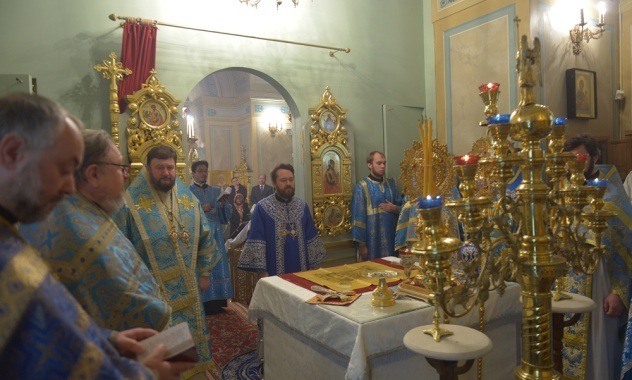 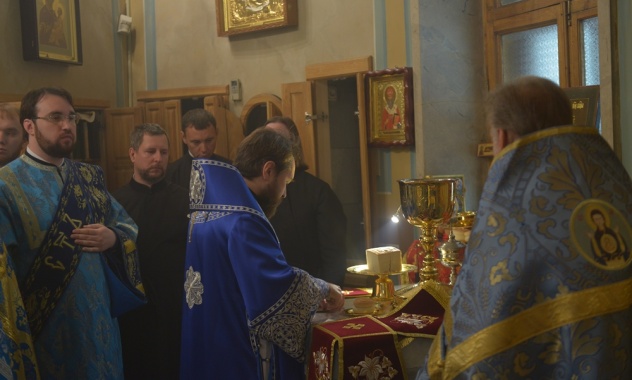 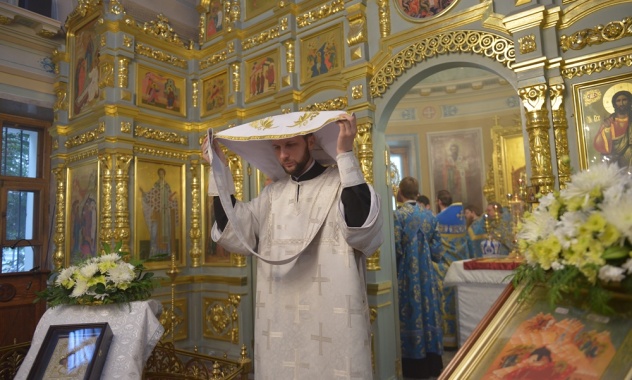 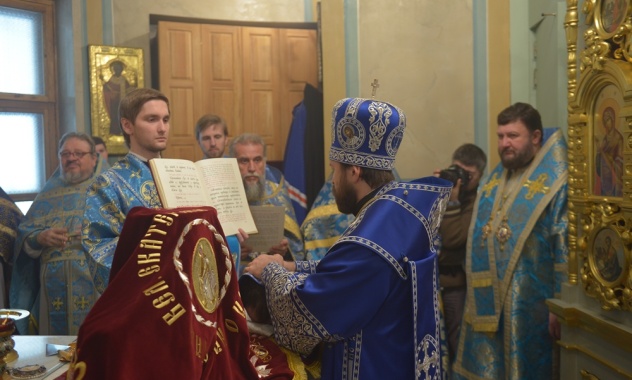 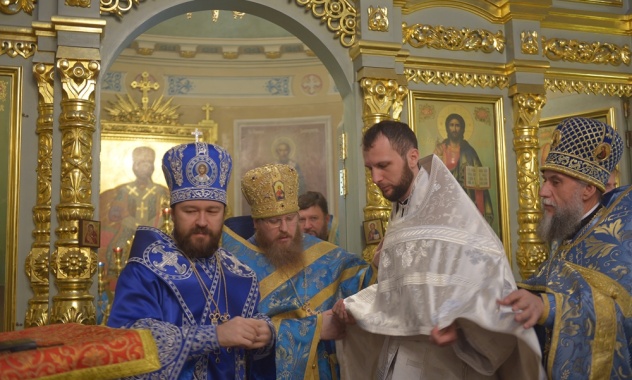 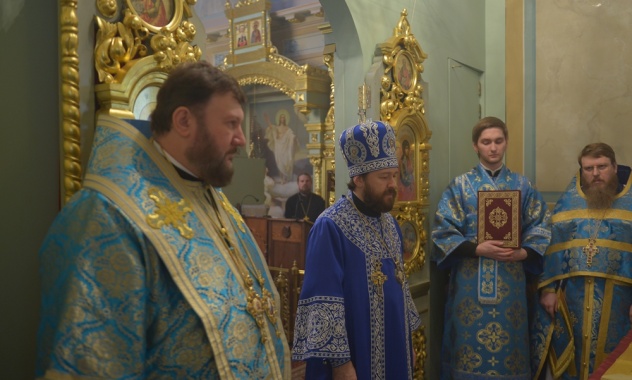 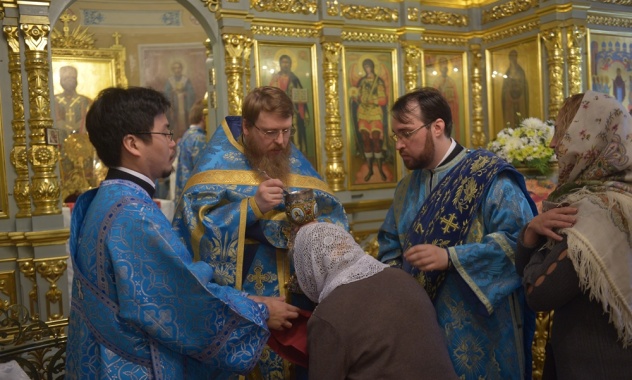 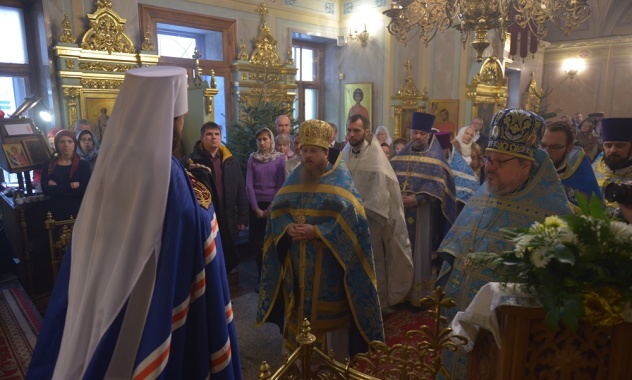 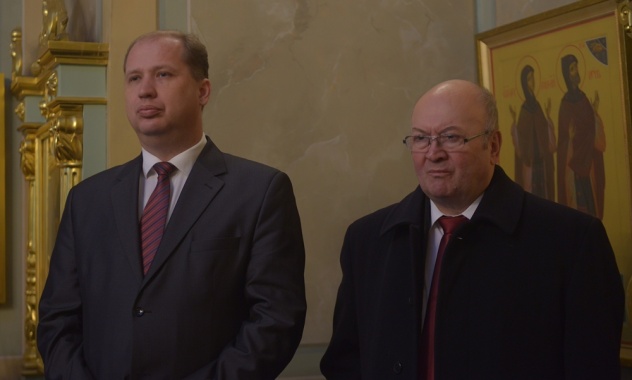 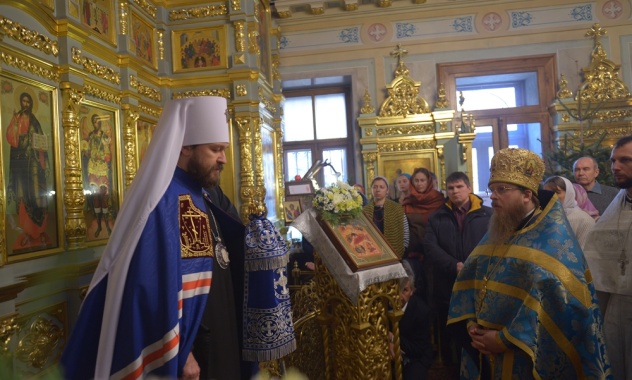 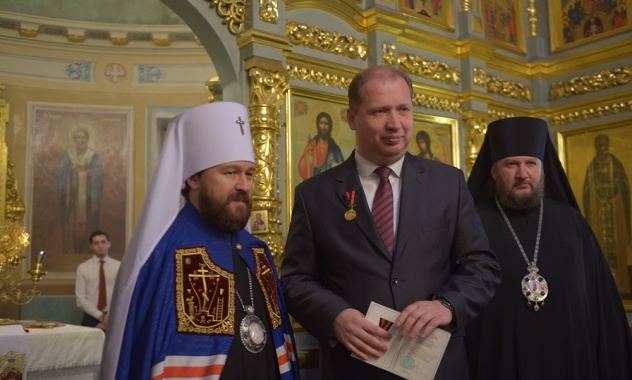 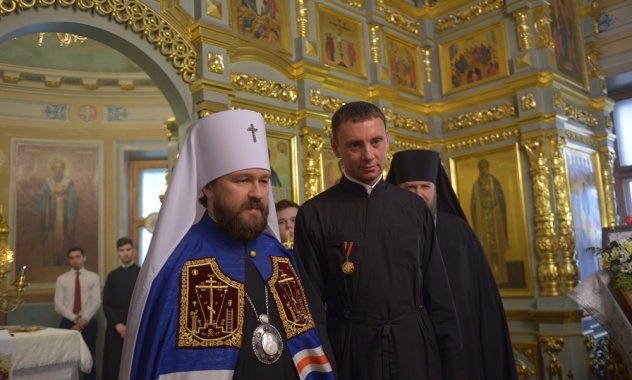 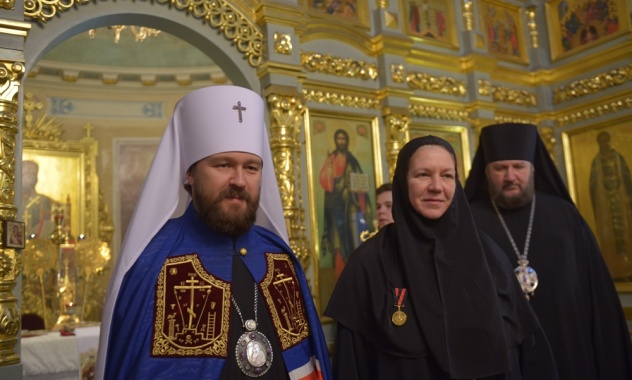 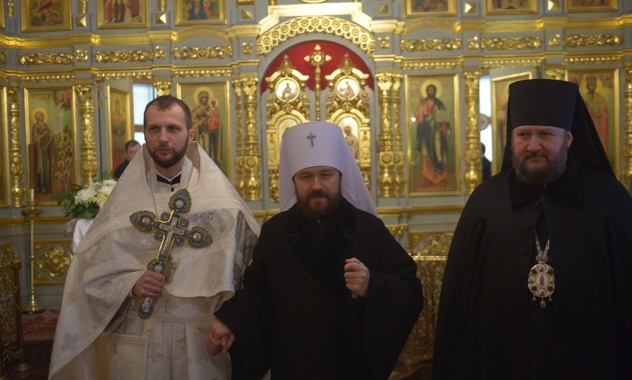 On January 8, 2016, feast day of the Synaxis of the Most Holy Mother of God, the chairman of the Department for External Church Relations of the Moscow Patriarchate, Metropolitan Hilarion of Volokolamsk, celebrated the Divine Liturgy at St. Nicholas church at Kotelniki – the Moscow Metochion of the Orthodox Church of the Czech Lands and Slovakia.

Concelebrating with His Eminence were: the Representative of the Patriarch of Serbia to the Patriarch of Moscow and All Russia, Bishop Anthony of Moravicí; the OCA Representative to the Moscow Patriarchate, Archimandrite Alexander (Pihach); the Representative of the Orthodox Church of the Czech Lands and Slovakia to the Patriarch of Moscow and All Russia, the rector of St. Nicholas Metochion Church at Kotelniki, Archimandrite Seraphim (Shemiatovsky); the dean of Pokrovski district of the Moscow city diocese, the rector of the Church of St. Martin the Confessor, archpriest Alexander Abramov; DECR secretary for inter-Orthodox relations, archpriest Igor Yakimchuk; members of clergy.

Following the Litany of Fervent Supplication, Metropolitan Hilarion ordained Hierodeacon Alexander (Galushko), a cleric of St. Nicholas Church at Kotelniki, secretary of the Moscow Metochion of the Orthodox Church of the Czech Lands and Slovakia, to the office of Hieromonk.

Once the Divine service celebrated, Archimandrite Seraphim addressed Metropolitan Hilarion with the words of salutation and presented the DECR chairman with the Holy Panagia.

Then, Metropolitan Hilarion of Volokolamsk delivered an archpastoral homily:

First of all, I would like to convey to all of you the blessing of Patriarch Kirill of Moscow and All Russia. With his blessing, I am celebrating this Divine Liturgy here today. I am glad that we were able to stand before the God’s Altar in a fraternal fellowship, to make together a bloodless Sacrifice and to take the Communion of the one Bread, and from the one Chalice, to feed on God Himself, Who offers to us His most pure Body and Blood under the image of bread and wine. I am glad that together we can celebrate the feast of the Nativity of Christ.

I cordially greet you, dear Bishop Anthony, as a representative of the brotherly Serbian Orthodox Church. I wish you God’s help in your service, and ask you to convey our good wishes and Christmas greetings to His Holiness Serbian Patriarch Irinej.

I would like to greet you, Very Reverend Father, Archimandrite Seraphim, as rector of this holy church and as a representative of the Orthodox Church of the Czech Lands and Slovakia, as well as to congratulate you and all the parishioners on the Nativity of Christ.

This feast always renews our sense of closeness to God and reminds us how the Lord showed His Mercy to humankind and wished to incarnate , to become a helpless baby, and then to live a human life, to suffer and to die for the human race; how He wanted to save all and each of us through all this, and to reveal to us the way to the eternal life.

We are celebrating the Nativity of Chirst during the entire period, which began yesterday and will continue throughout the Christmastide, until the Eve of the Theophany. On the second day of Christmas we celebrate the Synaxis – which is a sacred eucharistic gathering – in honor of the Most Holy Lady Theotokos and Ever-Virgin Mary. The Church has established this feast to remind us of the event without which the Incarnation of God would never have occured.

We know that there is the Will of God that acts in the world. But we also know that there is the human will, which sometimes acts in consort with the Will of God, and sometimes is opposed to it. While reading the Old Testament, we see that in some cases the human will was at unity with God, and in that case He performed the actions that He wished to perform on this earth. Yet in (some) other cases the human will was opposed to the Divine Will; then, God seemed to step back, because He is patient and waits for people to show their good will.

The entire history of the Old Testament was, on the one hand, the history of obedience to the Will of God of some people, such as Abraham, Moses, the prophets of the Old Testament, and on the other hand, it was the history of the human struggling against God. When the “fullness of time” (Gal 4:4) came, as Apostle Paul says, when God desired His Son to come to this world, a human assistance was necessary. And it was found in the person of the Blessed Virgin – the One Who was raised at the temple, and took in with Her Heart the words of the Holy Scripture. The Holy Spirit had prepared Her to become the Mother of God, so that our Lord Jesus Christ could be born and could come to the world through Her. Thus, it is natural that yesterday we gave thanks to God for His ineffable gift of His presence among us, and today we also thank, along with the Lord, the Blessed Virgin.

As we heard in one of the Christmas hymns, many had tried to bring gifts to the Lord: the Magi brought gold, frankincense and myrrh; the sky brought a star; the shepherds brought their worship. However the entire humankind presented to God the Blessed Virgin. And precisely through this people’s contribution, the Incarnation became possible.

Today we learned through the Gospel reading that from the very beginning of His earthly life, our Lord Jesus Christ was exposed to the evil of human will: long before Christ was betrayed by the Jewish people and sentenced to death, the Jewish King Herod had planned to kill Him, even though He was a baby – because the king saw in the birth of the Lord a threat to his earthly kingdom. And we learn from the Gospel of Matthew that an angel of the Lord came to Joseph in a dream. As formerly, when an angel came to him in a dream and told to take Mary with no doubt, because “that which is conceived in Her is of the Holy Ghost” (Mt 1:20) – now the Lord said to Joseph through an angel: “Arise, and take the young Child and his Mother, and flee into Egypt <…> for Herod will seek the young Child to destroy Him” (Mt 2:13). And after the death of Herod, it was revealed to Joseph – again in a dream – that he could return to his land. But when he came to the land of Israel, he found out that Judea was governed by a son of Herod, Archelaus. And again in a dream, Joseph receives a revelation commanding him to go to Galilee and to settle there. That is what Evangelist Matthew tells us. He is the only Evangelist who tells what happens to a dreeming man, and how the Lord appears to the man mysteriously.

In the Gospel of Luke, the angel of the Lord appears in a real life, while in the Gospel of Matthew four appearances of the angel to Joseph occur in a dream. If we remember that the Magi received in a dream the revelation telling them not to return to Herod, and later, when the Lord was being judged by Pilate, the wife of the latter received a kind of revelation in her dream, which she then explained to her husband – we see that Evangelist Matthew pays a particular attention to the revelations that occur mysteriously in a dream. No other Gospel tells us anything of that kind.

During these Christmas days, we remember God’s revelation, seen by people asleep or in reality. We remember the appearance of angels who announced the birth of the Infant, and we thank the Lord Himself for showing His mercy to humankind and granting to us the grace of His presence.

We thank the Blessed Virgin Mary, Who has assisted this. When the angel came to Her, She said: “Be it unto me according to Thy word” (Lk 1:38). Without Her assistance the Will of God would not have been fulfilled.

We thank the angels of God who were messengers of God’s Will, and remember the righteous of the Old Testament, including the Lord’s kinsmen in the flesh. By their faith, love and expectation of coming of Christ the Messiah to the world, they had also made their contribution to His comming.

Unfortunately, now we see some bad examples of how people driven by their passions and ambitions, sometimes encroach on the most sacred that should be immutable — the unity of the Church. More than twenty years ago, it happened in Ukraine, when one of the hierarchs using a difficult political situation and the support of then-state authorities, made a schism and drew some people away from the Church. Nowadays this schism remains a painful wound on the body of our Church. We believe and we hope that this will not occur in other Local Churches. We also pray fervently for Ukraine at every Divine Liturgy. We pray for the peace to be restored in the Ukrainian land and the unity to be reinstated within the Ukrainian Church, which is an inalienable part of the single Russian Orthodox Church.

Today, we were praying fervently for the Orthodox Church of the Czech Lands and Slovakia, for its unity to be restored, for the peace and harmony to reign over the Church again — according to the words of the angels that we heard during these days of Christmas: “Glory to God in the highest, and on earth peace, good will toward men” (Lk 2:14). Let this peace be always on the earth, let no evil human will shake it, and let the good will, without which the people cannot live on this earth, in the world, and without which it is impossible to reach the Kingdom of Heaven – always be present among people. Amen”.

The DECR chairman congratulated Hieromonk Alexander (Galushko) on his priestly ordination. “I would like to wish you, dear Father Alexander, to perform with dignity the service, you were inducted into”, said the archpastor. “Let the Lord support you in it. Let the Holy Theotokos preserve you from any kind of evil, let the holy angels assist you in this lofty and responsible ministry.”

In remembrance of the Divine service at the Moscow Metochion of the Orthodox Church of the Czech Lands and Slovakia, Metropolitan Hilarion handed over to Archimandrite Seraphim (Shemiatovsky) a late 19th century litography depicting the facade of St. Nicholas Church at Kotelniki.