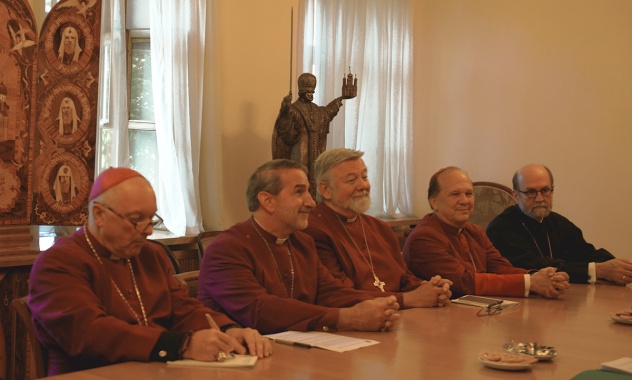 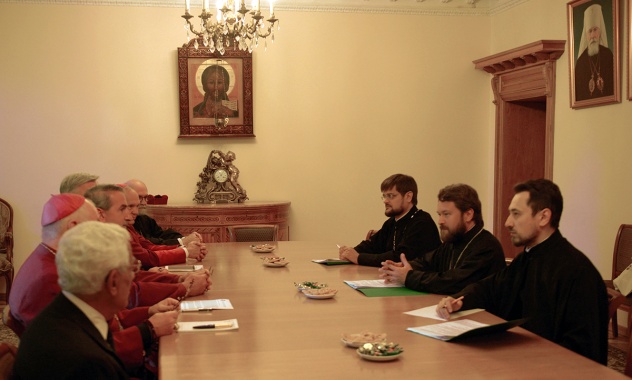 On 25 August 2015, Metropolitan Hilarion of Volokolamsk, chairman of the Department for External Church Relations of the Moscow Patriarchate, met with members of the delegation of the Anglican Church in North America (ACNA), who had come to Russia on a pilgrimage visit. The meeting took place at the DECR premises.

Metropolitan Hilarion told the guests about the activities of the Department for External Church Relations, paying special attention to inter-Christian contacts of the Russian Orthodox Church and her relationships with the Protestant world. As the DECR chairman noted, the process of liberalizing moral teaching is going in a number of Protestant Churches today. The Moscow Patriarchate breaks off communion with such Churches.

The participants in the meeting discussed the issues, pressing for the Anglican Communion today, including the issue of admitting women to ‘episcopal’ orders, which has become a topic of heated debate after the General Synod of the Church of England made the respective decision in 2014, as well as the problem, closely related to the previous one, of preserving the unity of the Anglican Communion, whose spiritual centre is the Archbishop of Canterbury.

The guests shared with Metropolitan Hilarion their vision of the abovementioned issues, reaffirming the ACNA’s commitment to the Gospel moral principles and doctrines, traditional for Anglicans.

The participants in the meeting expressed their satisfaction over the fruitful cooperation between the Russian Orthodox Church and the Anglican Church in North America in academic sphere. For instance, Ss Cyril and Methodius Theological Institute of Postgraduate Studies has entered into cooperation with Nashotah House Theological Seminary, WI, USA.