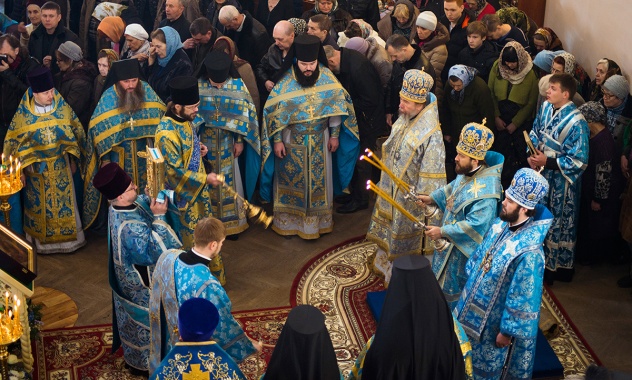 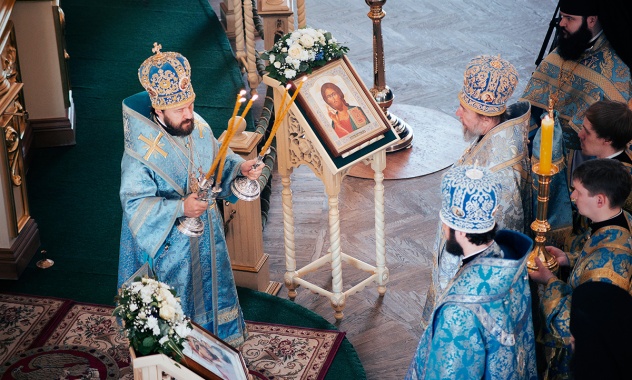 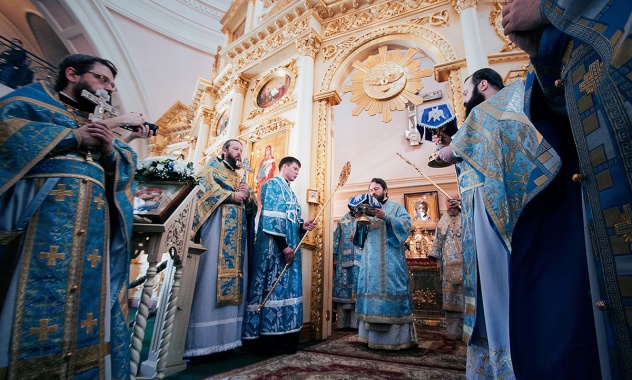 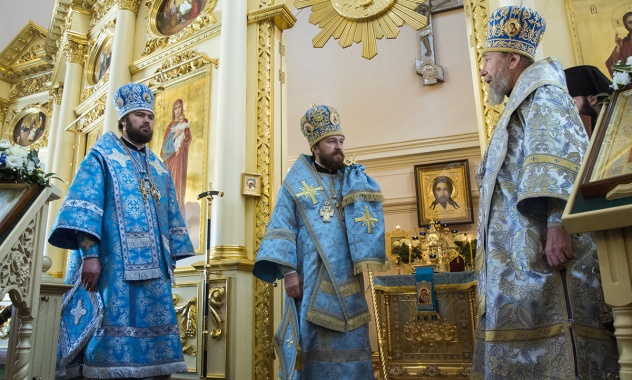 On 28 March 2015, Metropolitan Hilarion of Volokolamsk, chairman of the Moscow Patriarchate’s Department for External Church Relations, celebrated with Metropolitan Anastasiy of Kazan and Tatarstan the Divine Liturgy at the Monastery of the Nativity of the Virgin Mary in Kazan. The monastery was built in the 16th century at the place of the finding of the miracle-working icon of the Heavenly Queen. Kept at the abode is the copy of the Kazan Icon which was stored in the Vatican for a long time and was presented to the Russian Orthodox Church in 2004.

After the Liturgy and a thanksgiving before the venerated copy of the Kazan Icon of the Mother of God, Metropolitan Anastasy greeted Metropolitan Hilarion on behalf of the worshippers and noted that the Kazan diocese began the celebrations marking the millennium of the blessed demise of St Vladimir, Equal-to-the-Apostles.

Metropolitan Hilarion conveyed to all those present blessings from His Holiness Patriarch Kirill of Moscow and All Russia, saying in particular:

“In 2015, with the blessing of His Holiness Patriarch, all metropolias of the Russian Orthodox Church will hold celebrations dedicated to the millennium of the demise of the Holy Prince Vladimir, Equal-to-the-Apostles.

“All Russian people keep sacred memory of St Vladimir. It is difficult to imagine what would have been the fate of our homeland had it not been for Prince Vladimir’s choice made first for himself and then for the Russian people. The Baptism of Russia was a turning point in the history of our motherland. From that time onwards Orthodoxy was being preached at the great spaces of the Holy Rus’.

“For centuries, the Orthodox Christians have been living in various regions of our country side by side with representatives of other religions, such as Islam, Judaism and Buddhism, traditional for our homeland. Yet, Orthodoxy was the spiritual power which helped those dwelling in our land become the Russian nation. Thinking of the journey that our homeland and our Church have made for these thousand years, we feel gratitude to the Holy Prince Vladimir who had committed the heroic deed: living among pagans and idolaters, he had made a courageous for those days choice by embracing Christianity.

“The Holy Prince Vladimir shows us an example of a man who converted to Christ and devoted all his life to Him. That is why we glorify him as equal to the Apostles: he accomplished the feat, akin to that of the Apostles who had been travelling about the lands of the gentiles and enlightening them with the light of Christ’s faith.”