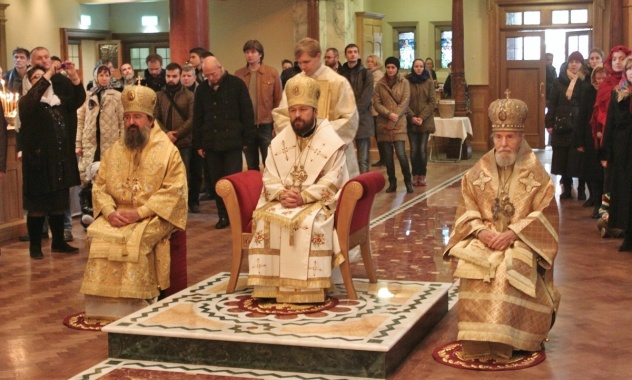 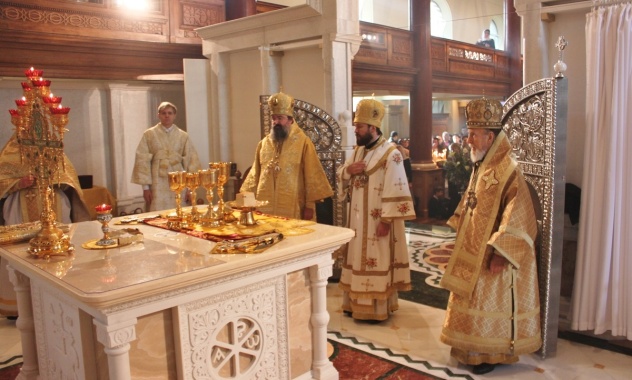 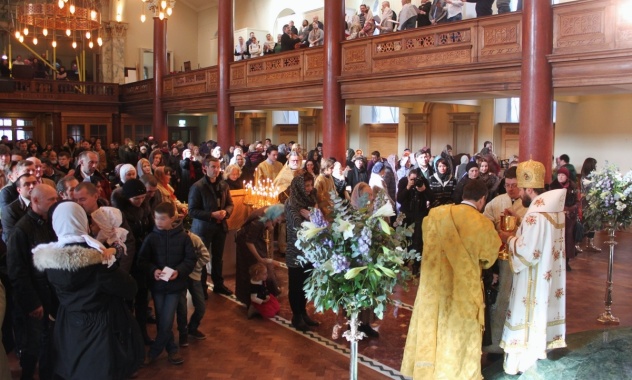 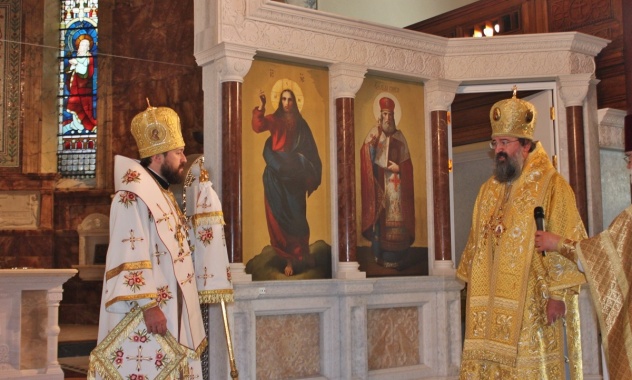 On 8 February 2015, Metropolitan Hilarion of Volokolamsk, chairman of the Moscow Patriarchate’s Department for External Church Relations, who is visiting Great Britain with the blessing of His Holiness Patriarch Kirill of Moscow and All Russia, celebrated the Divine Liturgy at the Cathedral of the Holy Dormition and All Saints in London. Concelebrating with the DECR chairman were Archbishop Elisey of Sourozh, Archbishop Anatoly of Kerch, clerics of the Cathedral: archpriest Joseph Skinner and protodeacon Dimitry Nedostupenko, and hierodeacon Nikolai (Ono).

The Liturgy was celebrated in Church Slavonic and English.

After the Dismissal, Archbishop Elisey of Sourozh greeted the DECR chairman, saying, “It has been a joy for us to pray with you at God’s Holy Altar and to partake of the Divine Eucharist with our whole community. Many of these people are well known to you.”

Metropolitan Hilarion addressed all the worshippers with a homily, saying in particular:

“I would like to convey to you the blessing of His Holiness Patriarch Kirill of Moscow and All Russia who visited this church on numerous occasions in his capacity of chairman of the Department for External Church Relations. During recent six years I have been continuing the service that he performed before his elevation to the Patriarchal Throne. For this reason I visit, as regularly as I can, foreign countries and our parishes.

“I cherish many recollections of the Cathedral of the Dormition in London, where Metropolitan Anthony of blessed memory served for many decades. I first stepped over the threshold of this holy church a quarter of a century ago. I remember the way it looked back then and I rejoice at seeing it now. Vladyka Elisey, I am glad that you have managed to almost complete the restoration work which has been carried out outside and inside the church for several years.

“I remember the faces of some parishioners since the time I studied in this country and served here. Yet, today I see many new faces of children and young boys and girls. It makes my heart rejoice. Celebrating the Divine Liturgy, I felt faith, hope and love, with which you come here to pray to God and partake of Christ’s Holy Eucharist.

“Today we have heard the Parable of the Prodigal Son, which discloses the abyss of human folly and selfishness. However, this parable also reveals all the depth of the Divine love and mercy.

“This Parable tells us about God’s love for each of us. It also tells that we, being God’s sons and daughters, will never and under no circumstances lose our filial dignity. People may do whatever they wish in their relations with God: they may or may not love Him, believe in Him, fulfill His commandments, but whatever they do they will always remain His children. There can be no other relations between God and man, because the Lord created us as His sons and daughters. Even if we forsake God, He never forsakes us; and if we do not want to follow God, He follows us.

“I wish to all of you, dear Vladykas, dear fathers, brothers and sisters, God’s help on the path we are following together. The Lord Jesus Christ Himself showed us this path, leading us to the Heavenly Kingdom, of which we might become partakers even here, on earth. Amen.”

That same day, a concert of the Russian religious music took place at the Cadogan Hall. The Moscow Synodal Choir and the Russian Orchestra of London, conducted by Mr. Alexei Puzakov, the honoured artist of Russia, performed the St Mathew Passion by Metropolitan Hilarion of Volokolamsk. Professor Dimitri Conomos of Oxford University performed the part of Evangelist in the English language. Among the guests of honour were Metropolitan Kallistos of Diokleia (Patriarchate of Constantinople), Archbishop Elisey of Sourozh, Archbishop Anatoly of Kerch, and Prince Michael of Kent. H.E. Alexander Yakovenko, Ambassador of the Russian Federation to Great Britain, delivered an opening speech before the concert.