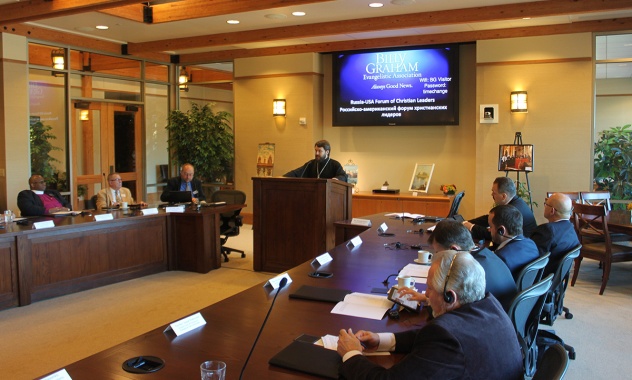 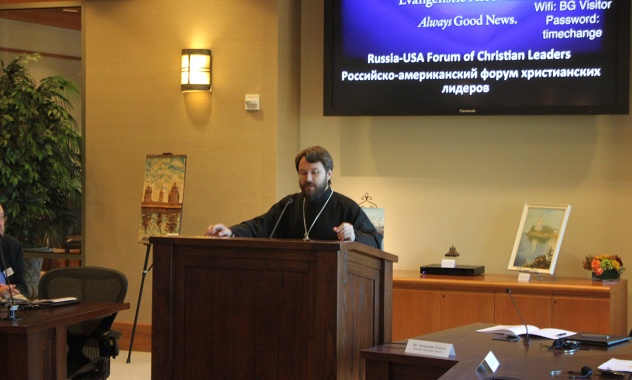 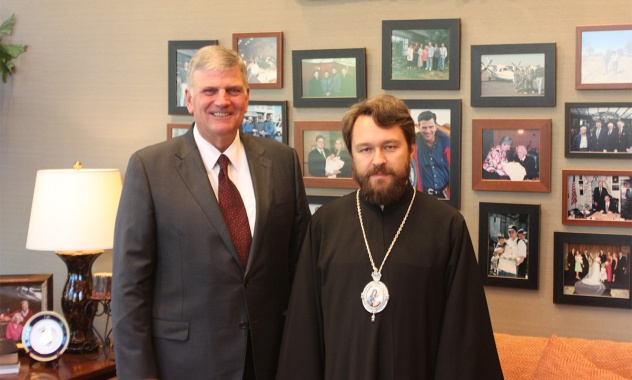 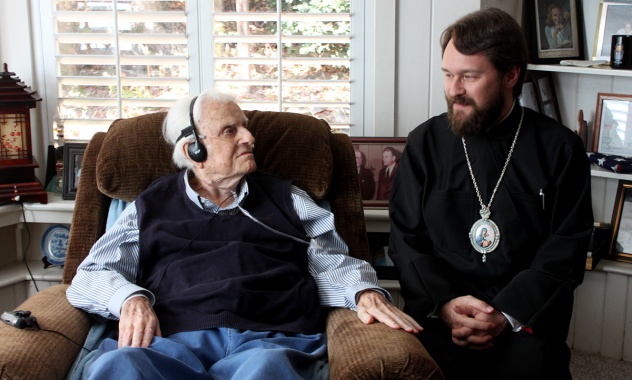 November 7, 2014 – Metropolitan Hilarion of Volokolamsk, head of the Moscow Patriarchate’s department for external church relations, with a blessing of Patriarch Kirill of Moscow and All Russia, attended the Russian-American Forum of Christian Leaders which took place at Charlotte, North Carolina. The forum was organized by the Billy Graham Evangelistic Association and attended by representatives of Christian Churches in Russia and the USA.

The delegation of the Russian Orthodox Church was led by Metropolitan Hilarion of Volokolamsk. It included Bishop Ioann of Naro-Fominsk, administrator of the Patriarchal Parishes in the USA, Archimandrite Philaret Bulekov, a DECR vice-chairman, Hieromonk Stephan Igumnov, DECR secretary for inter-Christian relations, Hieromonk Ioann Kopeikin, pro-rector of the Ss Cyril and Methodius Institute of Post-Graduate Studies, and A. Borzov and A. Yershod, DECR staff members.

The Russian side was also represented by A. Smirnov, chairman of the Union of Evangelical Christians-Baptists in Russia, V. Vlasenko, head of the UECBR department for external church relations, Bishop S. Ryakhovsky, president of the Russian United Council of Evangelical Christian Baptists, K. Bendas, UNCECB chancellor, N. Zalutsky, UNCECB first deputy head, I. Borichevsky, head of the UNCECB administration, and S. Vdovin, general secretary of the Russian Evangelistic Alliance.

Welcoming the participants in the forum, Mr. Franklin Graham noted the Billy Graham Association’s long relations with the Russian Orthodox Church, recalling numerous visits made by his father to the Soviet Union, the first one as far back as 1959.

In his remarks, Metropolitan Hilarion spoke about the history of relations between the Russian Orthodox Church and Christian Churches in the USA, which very actively developed in the second half of the 20th century. But by the beginning of the 2000s, the Moscow Patriarchate had to break contacts with some Protestant churches in the USA because of the liberalization of their doctrine and practice and the proselytic activity in the territory of Russia. At the same time, the Russian Orthodox Church remained open to cooperation with those churches in America which stayed faithful to the traditions of the bilateral dialogue and committed to the biblical morality.

Speaking about prospects for this cooperation, Metropolitan Hilarion said that it could be based primarily on joint work for asserting traditional moral norms in today’s society. He singled out as a priority the protection of Christians who are persecuted in some regions of the world today. He gave special attention to the situation in Ukraine and the humanitarian crisis in it.

Bishop John of Naro-Fominsk, in his remarks, focused on the problem of secularism. Other speakers dealt with issues of common Christian witness in the modern society.

On the same day, Metropolitan Hilarion called on Dr. Billy Graham to congratulate him on his 96th birthday.