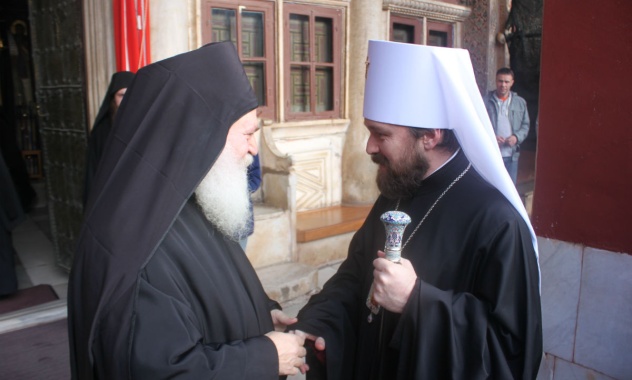 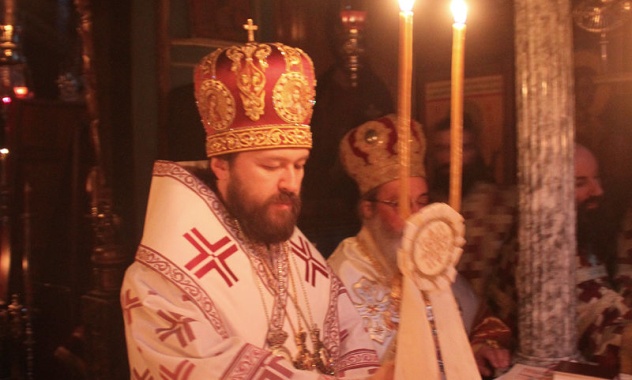 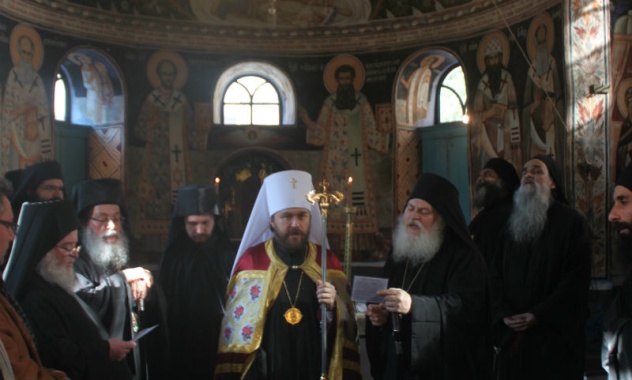 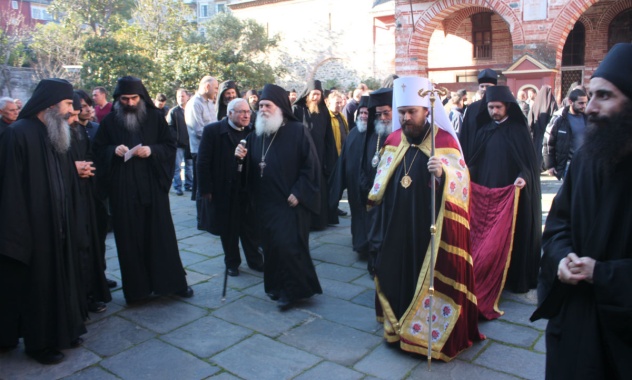 On 14th February 2014, Metropolitan Hilarion of Volokolamsk, chairman of the Moscow Patriarchate’s Department for External Church Relations, and his suite currently on a pilgrimage to the Holy Mount Athos, arrived at the Vatopedi Monastery. They venerated the Cinctute of the Theotokos, the miraculous icons of the Heavenly Queen called ‘Comfort and Consolation’ and ‘The Queen of All,’ and the precious heads of Ss Gregory the Theologian and John Chrysostom.

Archimandrite Ephraim, hegumen of the monastery, informed the guests of the last developments in the monastic life and paid special attention to changes for the better in the life of the Russian Orthodox Church as the number of its dioceses has increased. Also discussed was the situation of Christians in Syria.

After the talk Metropolitan Hilarion and his suite proceeded to the Annunciation Cathedral where the All-Night Vigil was celebrated.

On February 15, the feast of the Meeting of the Lord, Metropolitan Hilarion, Metropolitan Hierotheos of Zichna and Nevrokopi (Orthodox Church of Greece), archimandrite Ephraim and the ordained brethren celebrated the Divine Liturgy, after which a repast with the Office of Panagia was conducted in accordance with the monastery’s Ordo. During the meal Metropolitan Philaret addressed the brethren with greetings and exhortations, urging them to beseech the Lord ‘to grant us strength to be the true monks and go along the path on which He has put us towards the heavenly Kingdom.’

That same day, the DECR chairman and Mr. Vladimir Yakunin, president of the Russian Railway Company and chairman of the Board of Trustees of the St. Andrew the First-Called Foundation took part in the ceremony of awarding archimandrite Ephraim. He was honoured with the “Faith and Faithfulness’ prize of the Foundations.

Metropolitan Hilarion congratulated archimandrite Ephraim and told him and the brethren about the Foundation’s activities, among which he underscored the bringing of the Cincture of the Theotokos to Russia and its historical importance to the Russian Orthodox Church.